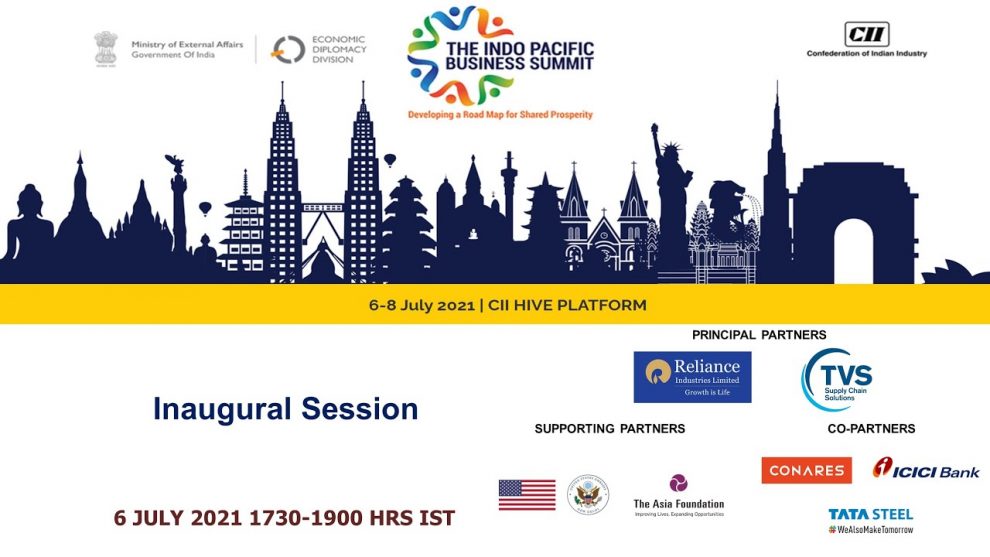 The Indo-Pacific Business Summit 2021 organized by the Confederation of Indian Industry (CII) in partnership with the Ministry of External Affairs, Government of India, is starting Today. The summit comes in the wake of the Indo-Pacific Ocean Initiative (IPOI), which was announced by the Prime Minister of India Narendra Modi during the 14th East Asian Summit.

The 2-day summit, starting from July 6- 8, will focus on how India and the countries of the Indo-Pacific region can boost their economic partnership, collaborate for sustainable use of maritime resources, future economic development, along with the idea of free trade will be stressed upon.

With maritime and trade connectivity becoming one of the key pillars of the initiative, this summit will provide an industry perspective on IPOI.

On 4 November 2019, Prime Minister Narendra Modi launched the Indo-Pacific Ocean Initiative (IPOI) at the East Asia Summit. The IPOI seeks to ensure the security and stability of the regional maritime sector. The IPOI is an open, non-treaty based initiative for countries to work together for cooperative and collaborative solutions to common challenges in the region.

The IPOI is based on the existing regional architecture and mechanism to focus on seven pillars:

– For further increase in trade, India is focusing on sectors such as infrastructure, logistics, digital transformation, startups, food and agriculture, clean energy, health care and life sciences in the Indo-Pacific Business Summit 2021

What it means for India?

According to Indian External Affairs Minister S Jaishankar, the “Indo-Pacific construct signifies the confluence of the Indian and Pacific oceans that can no longer be handled as distinct spheres. It is a reiteration that the world cannot be frozen for the benefit of a few, the security, stability, peace and prosperity of this vast region is vital to the world. The Indo-Pacific concept is not a forecast of tomorrow but a reality of yesterday. It reflects India’s broad horizon, broad interests and globalized activities. The Indo-Pacific is the center of India’s exports and imports.”

Through the Indo-Pacific Summit 2021, India’s strategic priority for ensuring peace, stability, security and prosperity in the region (articulated through IPOI) is integrated with its goals of building a thriving ‘blue economy’, which is vital to the country’s economic development and post-COVID-19 economic recovery.