India shares a close partnership with African countries. In recent years, India has visibly enhanced the level of political and economic engagement with the region. Amidst the current pandemic, India has continued its diplomatic engagement with the region. The Vaccine Maitri (Friendship) initiative, launched by the Indian government, provides fresh opportunity for furthering cooperation with Africa, particularly in the health sector, which has been a crucial part of India’s partnership with Africa.

The India-Africa development cooperation in health sector has gained greater salience in view of the several global and regional health policy instruments. Prominent amongst them are the 2030 Agenda for Sustainable Development, including the Sustainable Development Goals (SDGs) and ‘Agenda 2063: The Africa We Want’, launched by the African Union.2 These instruments call for ensuring healthy lives and promoting wellbeing for all. India’s national health policy also echoes these goals.

Another  important initiative,  the Pan-African e-Network, first launched in 2009 and relaunched as the eVidya Bharti e Arogya Bharti (eVBAB) project in 2019, has connected hospitals in 54 African countries with medical practitioners in India to provide consultations and comprehensive tele-medicine training opportunities for African doctors, nurses and paramedics.

Africa has around 3.9 million confirmed COVID 19 cases, as of March 11, 2021.4 Maximum cases have been reported in South Africa (1.5 million) followed by Morocco, Tunisia, Algeria, Nigeria and Kenya. From the outset, India maintained contact with countries in the region, and exchanged information on the management of the pandemic.5

With a population of around 1.3 billion, India is facing a major battle of its own fighting COVID-19.  However, the country has demonstrated capacity to support its partner countries. Since the coronavirus pandemic began, India has been at the forefront of supplying medicines and generic drugs to others.

India supplied hydroxychloroquine and paracetamol tablets, test kits, and other medical equipment for about 90 countries, including 25 from Africa.6 India has also helped with capacity building by offering health care training for COVID-19 management and protocols to several countries in Africa through the e-ITEC courses.

India’s defence forces have played a key role in implementing the country’s health cooperation initiatives with the African continent. Under Mission Sagar initiative, the Indian Naval Ship, INS Kesari, supplied COVID-related relief to Mauritius, the Seychelles, Madagascar and the Comoros. Similarly under Mission ‘Sagar-II’, Indian Naval Ship, Airavat, sailed to Sudan, South Sudan, Djibouti and Eritrea with medicines and material to support their fight against natural calamities and COVID-19 pandemic.7

Such missions are aligned with Prime Minister Narendra Modi’s vision of SAGAR — Security and Growth for All in the Region. They highlight the importance accorded by India to relations with its maritime neighbours, including those in Africa. These early responses during the pandemic have been buttressed by the Indian drive to share the Made-in-India vaccines across the world.

The inequity in the access and distribution of the Covid vaccine has left the African countries and India equally aghast. Rwandan President Paul Kagame has warned that vaccine nationalism “could undermine decades of progress in human development, while investing in vaccination for all would benefit international trade in the near future”.8 President Cyril Ramaphosa of South Africa has also drawn attention to the problem of vaccine hoarding by developed countries.9

India has constantly raised its voice against vaccine nationalism and has supported initiatives calling for international cooperation to ensure global access to the vaccine.10 At a time, when rich and powerful countries are resorting to vaccine nationalism, India launched the Vaccine Maitri initiative. This initiative marks the supply of Made-in-India COVID vaccine for free or at a marginal cost to countries around the world. The leading Made-in-India vaccines are Covaxin, manufactured by Bharat Biotech and the Oxford-AstraZeneca Covishield, produced by the Serum Institute of India.

The Vaccine Maitri Initiative has been launched in line with India’s philosophy of ‘Vasudhaiva Kutumbakam’ (the world is one family), as flagged by Prime Minister Modi during the Vaccine Summit in June 2020.11 As the largest vaccine producing country in the world, India has gifted millions of doses of the COVID vaccine to countries across the world, including in Africa.

Seychelles was the first African country to receive the Indian made vaccines. During the handing over ceremony, Sylvestre Radegonde, Minister for Foreign Affairs and Tourism of Seychelles, noted that this “gesture cements the ties of solidarity, friendship and cooperation which exists between our two countries.”12

As India rolls out its pandemic diplomacy with African countries, an important challenge is from criminal networks that may either hijack the consignments or supply fake vaccines. South African police recently busted a fake Covid-19 vaccine distribution network.13 Three Chinese nationals were arrested in this incident. In past, China has been involved in supplying fake medicines under the Made-in-India tag to African countries.14

In recent years, China’s footprint has also been rising in the African continent. This is visible in the increase in bilateral trade along with investments in large infrastructure projects in several African countries. During the pandemic, China has pledged to supply Sinopharm vaccines to around 20 African countries.

India’s Vaccine Maitri initiative will no doubt help African countries in the fight against the pandemic and foster stronger ties based on the principle of South-South cooperation.

India-EU Partnership: Can the Unfulfilled Potential Be Realised? 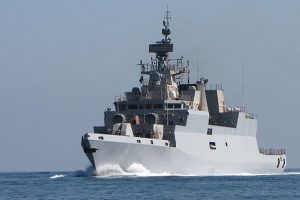 Why India Should Prioritise its Inner-Maritime Regions

India-Pakistan LoC Ceasefire Decision: A Thaw in Sight?
Russia’s Embrace of China: An Alliance in the Making?
Comment