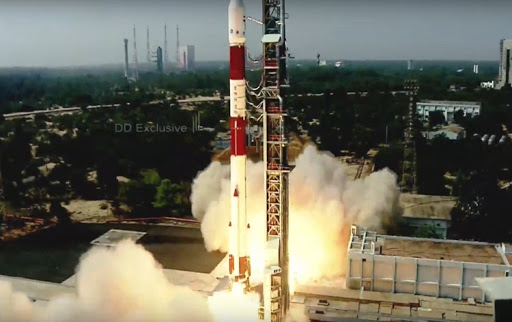 India’s Polar Satellite Launch Vehicle-C51 (PSLV-C51) rocket loaded with 19 satellites from Brazil, USA and India lifted off from the rocket port at Sriharikota successfully at the precise timing at 10.24 this morning.

The remaining 17 passenger satellites will be launched at a much lower orbit after 12 noon. This is the first commercial mission of New Space India Limited.

India’s first space mission for 2021 is one of the longest for a PSLV rocket and is expected to conclude after 1 hour, 55 minutes and 7 seconds into its flight.

Amazonia-1 is the optical earth observation satellite of the National Institute for Space Research (INPE).

Speaking after the launch, former astronaut and Brazilian Minister for Science and Technology Marcos Caeser Portes said that the satellite would further strengthen the existing structure by providing remote sensing data to users for monitoring deforestation in the Amazon region and analysis of diversified agriculture across the Brazilian territory.

Expressing happiness at the launch today, he said that Brazil looks forward to working with India in the space field.

The CMD of New Space India told that when the rest of the world was reeling under the cloud of Corona, Indian space sector awoke to the new launch of the year 2021.

ISRO chairman Dr.Sivan said that Amazonia was launched at the precise orbit. He told that ISRO was extremely proud honoured and happy to launch the satellite designed integrated and operated by Brazil for the first time.

He said that the remaining passenger satellites will be launched in a gap of more than an hour at a much lower orbit.