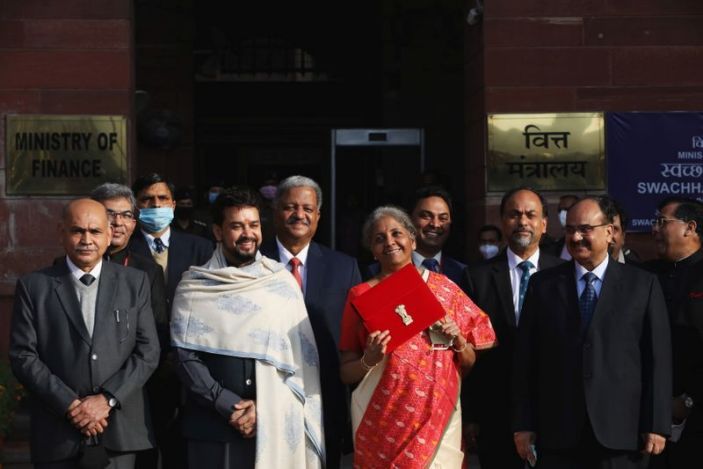 NEW DELHI: India boosted healthcare spending by 135% and lifted caps on foreign investment in its vast insurance market on Monday to help revive an economy that suffered its deepest recorded slump as a result of the pandemic.

Delivering a budget statement to parliament, Finance Minister Nirmala Sitharaman projected a fiscal deficit of 6.8% of gross domestic product for 2021/22, higher than the 5.5% forecast by a recent Reuters poll of economists.

The current year was expected to end with a deficit of 9.5%, she said, well up from the 7% expected earlier.

Prime Minister Narendra Modi said the budget was aimed at creating “wealth and wellness” in a country that is battling the world’s second highest coronavirus caseload after the United States.

India currently spends about 1% of GDP on health, among the lowest for any major economy.

“All of us decided to give impetus to the economy and that impetus, we thought, would be qualitatively spent and give necessary demand push if we choose to spend big on infrastructure,” Sitharaman told reporters after the presentation of the budget in parliament.

Millions of people lost their jobs when the government ordered a lockdown last year to combat the coronavirus. Thousands of small businesses remain shut.

Unlike other countries, India refrained from announcing a big stimulus, offering greater liquidity to firms instead, and held off using its fiscal firepower until curbs to contain the virus were lifted.

The government estimates the economy will contract 7.7% in the current fiscal year ending in March, in what would be the biggest fall ever recorded. However, it foresees a strong recovery in 2021/2022 with growth of 11%.

That would make it the world’s fastest growing major economy ahead of China’s projected 8.1% growth, but the government said it would take the economy two years to reach pre-pandemic levels.

“In a time of unprecedented economic stress, the government’s responsibility was to spend enough to revive the economy or else face enormous human suffering,” said Anand Mahindra, chairman of Mahindra group, an autos to technology conglomerate.

“So I had one expectation from this budget: that we should be very liberal in terms of the targeted fiscal deficit. Box ticked.”

THUMBS UP FROM MARKETS

But, bond yields jumped after the government announced plans to raise additional funds from the market over the next two months.

Sitharaman said the foreign direct investment (FDI) cap for the insurance sector would be increased to 74% from the current 49%.

She also allocated 200 billion rupees to recapitalise state-run banks that are saddled with bad loans and have been a drag on growth.

To bridge some of the deficit, the government plans to raise 1.75 trillion rupees from selling its stake in the state run companies and banks including IDBI bank, an insurance company and oil companies. It also wants to sell state firms’ surplus land.

The pandemic ruined the divestment plans for the current fiscal year with only 180 billion rupees raised so far from the sales. Stake sales and privatisation have seldom met targets in India, due partly to resistance from unions and political opposition.

Once united in support of Biden, environmentalists and unions clash over pipelines
Bangladesh sends more Rohingya refugees to remote island despite criticism
Comment