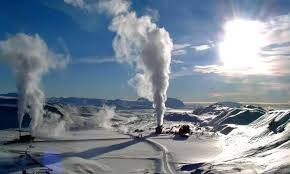 India’s first geothermal power project will be established at Puga village of eastern Ladakh. Puga has been identified as the hotspot of geothermal energy in the country by the scientists.

The first phase of the pilot project, one megawatt (MW) power generation capacity will be generated. A tripartite Memorandum of Understanding (MoU) for establishment and implementation of the first phase was signed on Saturday.

India’s first ever geothermal power project, known as Geothermal Field Development Project is planned to commission by the end of 2022. The tripartite MOU was signed between ONGC Energy, LAHDC, Leh and the Power Department of UT Ladakh.

In the first phase, the pilot project implemented by the ONGC-OEC will explore within the depth of 500 metres and it is planned to supply 24 hours free power to 10 neighbouring villages which are not connected with the northern grid for power supply.

The second Phase is proposed for deeper and lateral exploration of geothermal reservoirs by drilling optimal number of wells and setting up of a higher capacity demo plant in Ladakh. The second phase will be the Research and Development stage or demonstration of the project.

In the third phase, it is planned to promote joint ventures and commercial projects. Puga is a place where it is uncovered with a potential of more than 100 mw of geothermal energies.