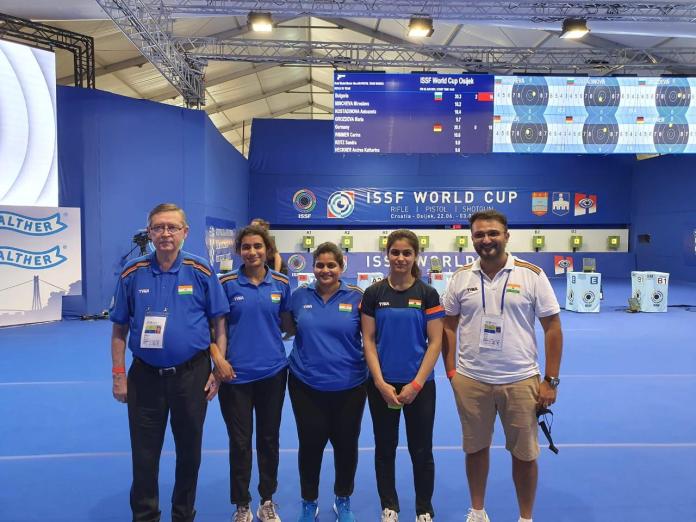 Rahi Sarnobat, drafted into the 10M Air team, Manu Bhaker and Yashaswini Deswal had come through two rounds of qualification earlier to make it to medal contention. They had topped round one on Thursday and then in round two, featuring the top eight-teams of round one, missed the gold medal match by two points.

Germany, who eventually settled for silver to Bulgaria’s gold, shot a combined 575 out of 600 to out do India who finished with 573. Bulgaria topped the round with 576.

In the bronze medal match against the Hungarian trio of Veronika Major, Sara Fabian and Miriam Jako, the Indians ran away to a 14-6 lead, winning seven of the first 10 series’ of three single shots per member per team.

The team with the highest three-shot aggregate is awarded two points, whereas in case of a tie, the points are split equally. The first to 16-points wins the match.

The Hungarians did come back strongly to make it 14-12, but the Indian women held their nerve admirably to get over the line.

Indians were involved in another tight medal encounter in the Men’s 10M Air Rifle Team bronze medal match, but this time they could not finish among the medals. The bronze medal match between India, comprising of Divyansh Singh Panwar, Deepak Kumar and Aishwary Pratap Singh Tomar, and Serbia, was tied at 4-4, 5-5,6-6, 8-8, 10-10, 12-12 and then 14-14 before the latter finally clinched it in the end.

In the Men’s Skeet, India’s lone entrant Gurjoat Khangura finished 56thwith a score of 115 in qualification.

Medals for the 10M Air Rifle and Air Pistol Mixed Team Olympic events will be decided on Saturday. They are among the four finals listed on the day. Iran currently leads the medal tally with two gold and one bronze medal. Bulgaria also has two golds and lie second.