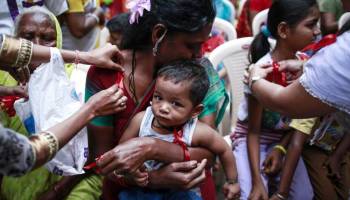 MUMBAI: India’s sex workers suffered a setback on Wednesday following a U-turn by the country’s human rights body, which said women in prostitution should not be registered as workers or guaranteed financial aid from the government amid the fallout of COVID-19.

The National Human Rights Commission (NHRC) last month asked state governments to recognise sex workers as informal workers, which would have entitled them to benefits and aid from a $23 billion fund for India’s poor during the coronavirus pandemic.

While the watchdog’s non-binding advisory was hailed by several campaigners as a boon for the rights of an estimated 800,000 sex workers across India, other activists said such a move would be illegal and risked legitimising sex trafficking.

Prostitution is legal in India but most related activities such as soliciting, pimping, and running a brothel are crimes.

The NHRC on Wednesday issued a new statement that said sex workers could not be registered officially or categorised as informal workers. The rights watchdog said they should instead be given help on “humanitarian grounds” during the pandemic.

“If they are not defined as workers, it is a failure to recognise the work they do to earn their livelihood and feed their families,” said Smarajit Jana, founder of Durbar Mahila Samanwaya Committee, a collective of sex workers in Kolkata.

“This is a setback … they will not be recognised as full-fledged citizens of the country, having full access to various citizenship documents and right to social and development schemes,” added Jana, whose group represents 65,000 sex workers.

Sex workers worldwide have lost work, earnings and their homes during multiple lockdowns to contain COVID-19. Many have been subjected to violence and blamed for spreading the virus.

Supiya, a sex worker for more than a decade in Mumbai’s red light district, said work had dried up and that she had been unable to financially support her parents as usual since March.

“I am getting customers once in two days now and making about 150 rupees ($2) per client,” said the 35-year-old, who did not disclose her full name. “How will I survive on this?

The NHRC – which makes recommendations but has no power to enforce them – said it changed course following letters from campaigners questioning the legality of its initial advisory, which focused on protecting women’s rights during COVID-19.

“Women in prostitution should get all the support as a marginalised group, but registering them … and giving them workers’ rights is going off-track,” said Sunitha Krishnan, founder of anti-trafficking charity Prajwala.

“Running a brothel is illegal. Giving women there workers’ rights completely misses the mark … brothels have a large number of trafficked women or those (who are) coerced.”

Yet the majority of women in prostitution are not victims of exploitation, according to advocates and collectives who said the plight of India’s sex workers was going under the radar.

Aarthi Pai, a legal advisor for the National Network of Sex Workers, said in a letter to the NHRC last month that a “worker identity” would protect sex workers from violence and abuses.

“Sex workers have no resources and are stigmatised when they look for other jobs,” said Bani Das, co-founder of non-profit Kranti, which supports the children of sex workers. “During the lockdown, they were asking for work but nobody took them (on).”

India’s top court in September asked states to provide food to women in prostitution after a survey by a collective in five regions found fewer than half of 120,000 sex workers had benefited from a government food welfare scheme for the poor.

Unaware of the ongoing debate over their rights, several sex workers said they were worried about rent and being able to eat.

Trafficking survivor-turned-sex worker Mumtaz – who lives in Mumbai – said she was living off food handouts from charities and was struggling to pay her daily rent of 100 rupees ($1.35).

“I need work, not aid,” the 40-year-old told the Thomson Reuters Foundation by phone, giving only her first name.

“We (sex workers) are all desperate here,” she added. “The pandemic has turned us into beggars.”