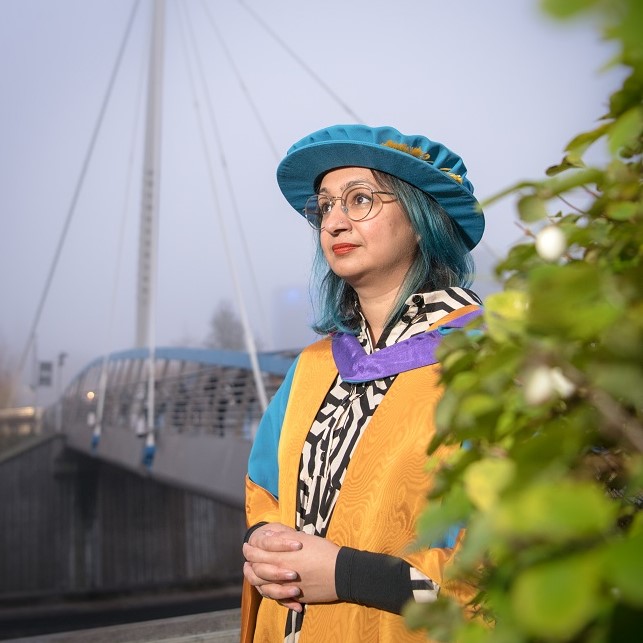 LONDON: An award-winning Indian-origin structural engineer who has worked on London’s tallest building, The Shard, has been conferred an honorary degree from Northumbria University in Newcastle, north-east England.

Roma Agrawal, 39, was awarded the degree of Doctor of Science by the university last week in recognition of her “outstanding career” as a leading female structural engineer, as well as for her work in striving to promote engineering, scientific and technical careers to young people and under-represented groups.

She is a Fellow of the UK’s Institution of Civil Engineers, the Institution of Structural Engineers and the Royal Institute of Chartered Surveyors and was awarded an MBE by the late Queen Elizabeth II in 2018 for services to engineering.

“It’s a real honour and joy to receive this award from Northumbria University, a place that I hold close to my heart,” said Agrawal.

“I often refer to the footbridge, which was my first ever engineering project, as my baby, so it means a lot to me to come back here and receive this generous recognition,” she said, with reference to her very first job after graduating from university designing and building a distinctive footbridge that crosses Newcastle Central Motorway.

The bridge was installed in 2007, linking Northumbria University’s east and west city campuses and providing a safe pedestrian and cycle route into the centre of Newcastle.

Agrawal is, however, best known as the structural engineer behind The Shard the UK capital’s landmark 95-story high skyscraper, which is the tallest building in western Europe.

As well as delivering hundreds of talks in schools, universities and organisations, she also hosts her own podcast and has published books for adults and children telling fascinating stories of how some of the world’s most famous buildings were built.

“I’ve always loved science and design and found engineering to be a great combination between the two,” said Agrawal, the author of How Was That Built? The Stories Behind Awesome Structures’.

In the past, Agrawal has been honoured with the Women in Construction Awards, Lewis Kent Medal from the Institution of Structural Engineers, the Rooke Award for public promotion of engineering from the Royal Academy of Engineering, among others. She received her honorary degree during the university’s winter graduation ceremonies, which were held on Northumbria’s Newcastle City Campus.

Northumbria University said honorary degrees are awarded each year to inspiring people who merit special recognition for their achievements, their links to the university and for inspirational qualities.