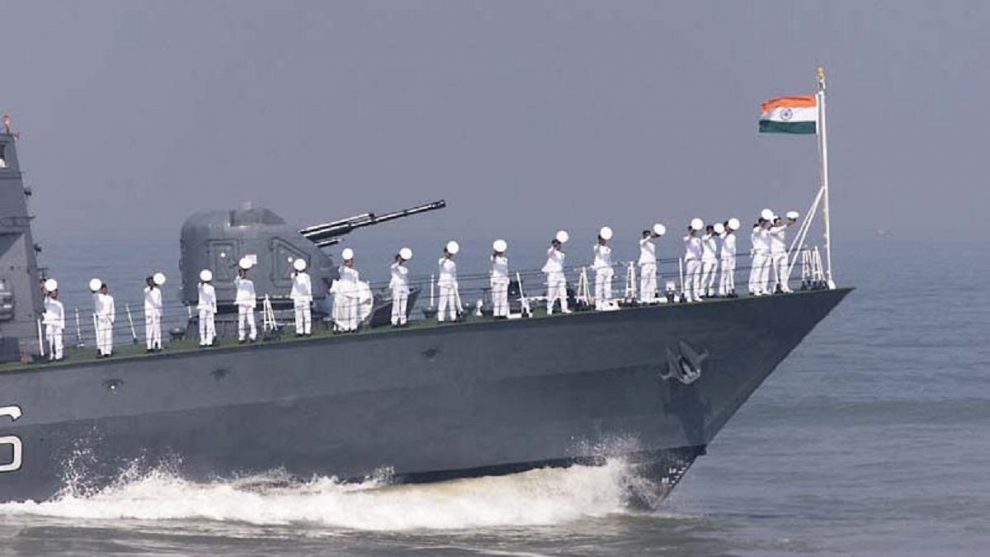 The Indian Navy has added a new acronym—TIDE—to its lexicon, which stands for Trust; Interoperability; Domain Awareness; and Enhanced Engagements. In his online address, titled “SAGAR – Charting India’s Maritime Security,” to the National Defence College, India’s Navy Chief, Adm Karambir Singh, emphasised that TIDE is closely linked with Indian Prime Minister Narendera Modi’s vision of Security and Growth for All in the Region (SAGAR), an initiative that was announced five years ago in Mauritius.

Adm Singh also alluded to the Indian Navy’s three ‘Lines of Effort’: (a) collaboration and cooperation (b) enhancing positive influence in the region, and (c) enhancing reach and sustenance in the farthest corners of India’s areas of interest, which resonate with “like-minded maritime nations, and are focused towards pursuance of our overall national and regional maritime objectives.” However, in the same breath, ostensibly referring to China, he was unequivocal that the “global commons” could emerge as “contested seas” threatening free flow of commerce and trade. Addressing this, he argued, necessitates a “pragmatic and outcome based strategy, rather than a purely conceptual.”

Although it is fashionable for militaries to coin acronyms for long or complex formulations for use in their day-to-day operational and administrative functioning, Adm Singh’s acronym, TIDE, embeds three important security discourses—cooperative, convergent, and competitive. These are also echoed in India’s politico-diplomatic thinking and strategic decision-making.

The ‘cooperative’ discourse is led by SAGAR, which motivates states to “conserve and sustainably use the maritime domain, and to make meaningful efforts to create a safe, secure and stable maritime domain.” Its primary focus is on the Indian Ocean, in which India is an important player and has been labelled as a ‘net security provider’. Its contribution to regional grouping such as the Indian Ocean Rim Association (IORA), Indian Ocean Commission (IOC), Djibouti Code of Conduct, Indian Ocean Naval Symposium (IONS) etc is worth mentioning.

The ‘convergent’ security discourse is the Indo-Pacific Oceans Initiative (IPOI), flagged by Prime Minister Modi at the November 2019 East Asia Summit in Bangkok. It is an ‘open global initiative’ and draws on “existing regional cooperation architecture and mechanisms to focus on seven central pillars conceived around Maritime Security; Maritime Ecology; Maritime Resources; Capacity Building and Resource Sharing; Disaster Risk Reduction and Management; Science, Technology and Academic Cooperation; and Trade Connectivity and Maritime Transport.” These are to be achieved by creating partnerships with interested countries. Significantly, India’s vision of the IPOI resonates with Japan’s Free and Open Indo-Pacific, which envisages combining two continents (Asia and Africa) and two oceans (Pacific Ocean and Indian Ocean); and the ASEAN Outlook on Indo-Pacific, which seeks cooperation in a broad range of areas of maritime collaboration, connectivity, UN Sustainable Development Goals 2030, economy etc.

TIDE’s ‘competitive’ discourse is reflected in the Quadrilateral Security Dialogue (QSD) that is associated with the Malabar series of naval exercises, involving India, Japan and the US, and which now includes Australia. These fit into New Delhi’s broad understanding of the Indo-Pacific that is centered on China albeit with varying interpretations. Undeniably, the Indo-Pacific is an arena of a power shift (relative and real) and has a bearing on the global security order.

There is ample evidence of competitive security at play in the Indo-Pacific. In particular, the western Pacific Ocean has emerged as the centre of gravity for naval presence, aggressive posturing and maritime/naval infrastructure development. The US has announced the Pacific Deterrence Initiative; conducted unprecedented multi-carrier operations; and relentlessly undertaken Freedom of Navigation Operations in the South China Sea (SCS). China’s navy has responded in equal measure such as by carrier operations; simultaneous naval-air drills in different sea areas; launching DF series ballistic missiles (carrier killers) in the SCS; and militarily intimidating Taiwan. The Australian and Japanese Navies have conducted high end naval exercises. The French Navy too is proactively engaged in multilateral naval exercises; the Canadian Navy is making its presence in the region; the British Royal Navy has plans for long deployment in the region by its new carrier; and it would not be surprising to see the German Navy in the region in the coming future.

Since June 2017, the Indian Navy has engaged in Mission Based Deployments (MBD) for enhanced Maritime Domain Awareness, and its warships, submarines and aircraft have been deployed in the Indian Ocean on near continuous basis for Presence and Surveillance Missions off critical choke points/sea lanes. It is fair to argue that the future of Indo-Pacific security will be determined in the western Pacific. The Indian Navy is not new to the western Pacific given that it has conducted the Malabar naval exercises in the region (off Guam and the Sea of Japan). The MBDs must avoid being labelled as the proverbial ‘frog in the well’ and expand into the western Pacific.

The author is a former director of the National Maritime Foundation, New Delhi.

India-Nepal relations: A view from New Delhi
The World This Week: Impending catastrophe in Yemen, Elections in Myanmar, and another crisis in Hong Kong
Comment