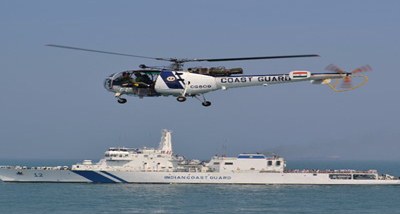 The Indian Coast Guard will celebrate its 45th raising day tomorrow. The Indian Coast Guard through its tireless pursuits of excellence has established itself as a reliable force that responds with alacrity to situations impinging on the Security of the Coastline, Safety of the Seafaring Community and Coastal Populace. In his message on the eve of Raising Day, Director General, Indian Coast Guard K Natarajan reaffirmed the commitment to the nation for ensuring safe, secure and clean seas.

From a modest beginning with just 7 surface platforms in 1978, ICG has grown into a formidable force with 156 ships and 62 aircraft in its inventory and is likely to achieve targeted force levels of 200 surface platforms and 80 aircraft by 2025.

As the fourth largest Coast Guard in the world, Indian Coast Guard has played a significant role in securing the Indian Coasts and enforcing regulations within the Maritime Zones of India. True to its motto “Vayam Rakshamah” meaning “We Protect”, the service has to its credit saving over 10,000 lives and apprehending around 14,000 miscreants since inception in 1977. On an average, the Coast Guard saves one precious life every second day at sea.

Despite the restrictions imposed by the ‘COVID-19’ pandemic, Indian Coast Guard has maintained 24×7 vigil in the Exclusive Economic Zone, by deploying about 50 ships and 12 aircraft daily. The deterrence at sea and coordinated air surveillance by the service enabled seizure of contraband worth about 1,500 Crore rupees and apprehension of more than 10 foreign fishing boats with 80 miscreants illegally operating in the Indian EEZ alone last year.