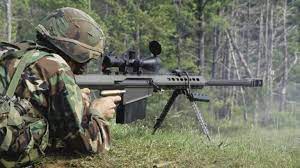 Pallanwala : The Indian Army has inducted the latest sniper rifles from Finland for soldiers deployed along the Line of Control (LoC) in Jammu and Kashmir, officials said.

“The latest sniper rifles have been inducted into the army. They are using it now. These are Sako .338 TRG-42 sniper rifles, a senior official told PTI.

The Sako .338 TRG-42 sniper rifles have a better range, firepower, and telescopic sights than those possessed by the adversary, the official said.

Snipers along the LoC are being trained on the new rifles, he said.

The move is to make the snipers more lethal amid a change in operational dynamics along the LoC, the official said.

Sniping has been a bigger challenge for the troops patrolling forward areas along the LoC and the International Border (IB) in Jammu and Kashmir, said the official.

Between 2018 and 2019, there was a sudden increase in the number of sniping incidents along the LoC and IB prompting armed forces to induct better sniper rifles and train its snipers against such attacks.

The Sako rifles have replaced the .338 Lapua Magnum Scorpio TGT by Beretta, and the .50 Calibre M95 by Barrett, which were inducted in the Indian army in 2019 and 2020. These rifles, made in Italy and America, had replaced the ageing Russian Dragunov, the mainstay of Indian soldiers.

First procured in the 1990s, the Dragunovs have slowly fallen behind contemporary sniper rifles which offer improved sights and mounts, increased accuracy, and a strike range of over 1 kilometre.

The Sako TRG-42 sniper rifle is a bolt-action sniper rifle designed and developed by the Finnish gun maker SAKO.

The rifle is designed to fire powerful .338 Lapua Magnum-sized cartridges. Weighing at 6.55 kgs without ammunition, the sniper rifle has an effective range of 1,500 metres, the official said.

“It is considered one of the most accurate and trustworthy weapons worldwide, he said.

The Army has sanctioned a team of 10 snipers, selected from the Indian Army’s units and regimental centres for the job, the official added.