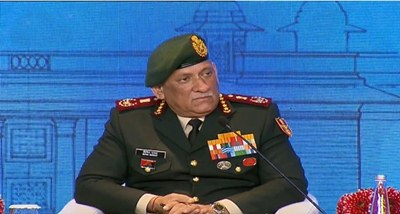 Speaking at a webinar organized by the National Defence College today, he said, the situation along the Line of Actual Control (LAC) in eastern Ladakh remains tense and that China’s PLA is facing unanticipated consequences for its misadventures in Ladakh because of firm responses by Indian forces. General Rawat said, India’s posturing is unambiguous and the country will not accept any shift in the Line of Actual Control. He said, as India grows in stature, security challenges will also rise proportionately.

The Chief of Defence Staff asserted that the country must move out of the constant threat of sanctions or dependency on individual nations for military requirements. He said, the country is investing in building long-term indigenous capability for strategic independence to squarely meet present and emerging challenges.

Referring to Pakistan, he said the new Indian template to deal with terror has injected uncertainty in the country which was continuing its proxy war through cross-border terror.