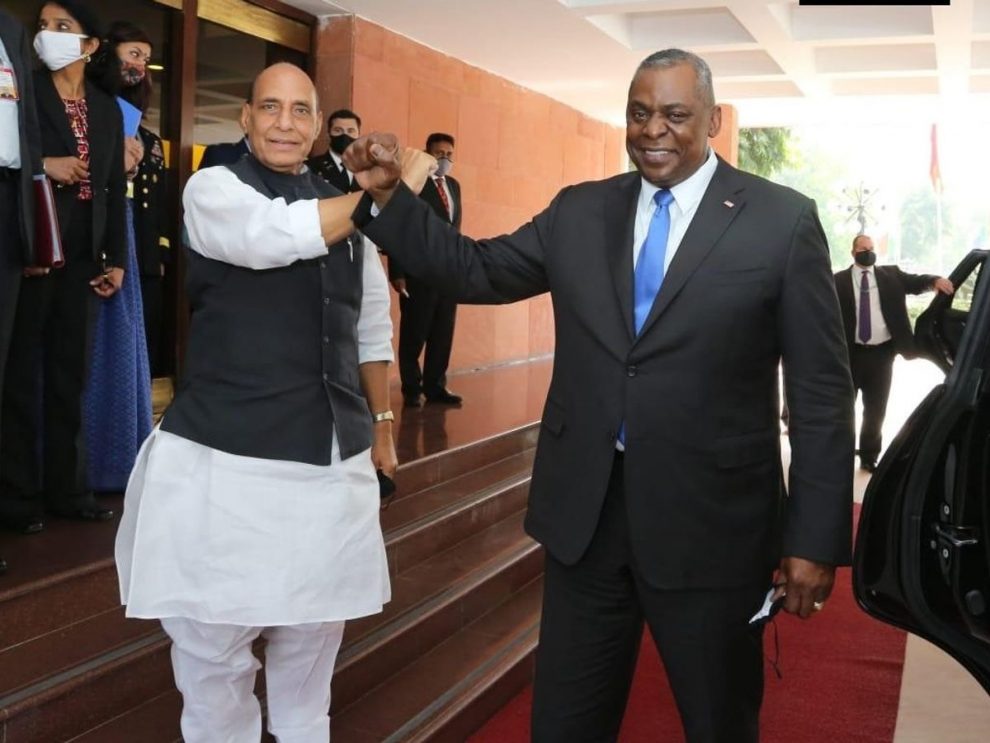 India and US today reaffirmed that their closer cooperation in partnership with countries keen to uphold rules-based order, can promote security and prosperity in the Indo-Pacific region and beyond. In a Joint Press statement after his talks with US Secretary of Defence Lloyd J Austin, Defence Minister Rajnath Singh said, it is consistent with India’s policy of SAGAR which stands for Security and Growth for All in the Region. He said, the recent and first Leaders’ Summit of India, USA, Japan and Australia has emphasized the resolve to maintain a free, open and inclusive Indo-Pacific. The Defence Minister said, Secretary Austin responded with amazing keenness and zeal to the proposals to further strengthen and deepen the partnership for peace, prosperity and the establishment of rules-based order in the region.

Mr Singh said, during the talks they discussed a range of issues with a focus on enhancing defence information sharing, cooperation in emerging domains of defence, mutual logistics support and expanding military-to-military engagements across services.

The Minister said, he had a very pleasant and rewarding meeting with Secretary Austin and his delegation and India and US are determined to work together to realize the full potential of the Comprehensive Global Strategic Partnership. He said, both countries are determined to expand cooperation from bilateral and multilateral exercises to developing closer bilateral linkages. Mr Singh said, both nations intend to pursue enhanced cooperation between the Indian military and US Indo-Pacific Command, Central Command and Africa Command. He said, both countries also plan to optimize the Logistics Exchange Memorandum of Agreement LEMOA, Communications Compatibility and Security Agreement COMCASA and Basic Exchange and Cooperation Agreement BECA Agreements and achieve their full potential to contribute to our security and prosperity.

The Defence Minister said, India is committed to consolidate and further expand our defence partnership. He said, considering the shared strategic interests and taking account of a world which is turning different, both countries need to closely work together. Mr Singh said, during the discussions, India and US felt the need for enhanced capacity building to address some of the non-traditional challenges such as oil spills and environment disasters, drug trafficking and IUU fishing. He conveyed his appreciation to Secretary Austin for the participation of US industry in Aero India. The Defence Minister hoped that US manufacturers will take advantage of India’s liberalized FDI policies in defence. He said, both agreed that there are opportunities for collaboration in defence industry. Mr Singh said, he is looking forward to work with Secretary Austin closely to make the India-US relationship one of the defining partnerships of 21st century.

Mr Singh said, the first visit abroad of Secretary Austin to India shows his deep and abiding commitment to the bilateral defence relationship.

In his statement, Mr Austin said, India is an increasingly important partner in today’s rapidly changing international dynamics. The US Defence Secretary said, he and Mr Singh had a very productive discussion. He reaffirmed the commitment to comprehensive and forward-looking defence partnership with India as central pillar of the approach to the region. Secretary Austin said, Indo-US relationship is a stronghold of free and open Indo-Pacific region. He said, Prime Minister Modi stated India stands for freedom of navigation and freedom of overflight, unimpeded lawful commerce in adherence to international law and it reaffirms the shared vision for regional security. He expressed condolences for the tragic accident that killed an Indian Air Force pilot earlier this week.

In the morning, the US Defence Secretary visited the National War Memorial. He laid a wreath and paid tributes to India’s fallen heroes.

Mr Austin was accorded a Tri-Service Guard of Honour at the Vigyan Bhawan Lawns in the national capital just before the talks.

Tuberculosis control needs to be taken up by everyone as developmental issue: Dr Harsh Vardhan
PM Modi addresses election rally at Kharagpur in West Bengal
Comment