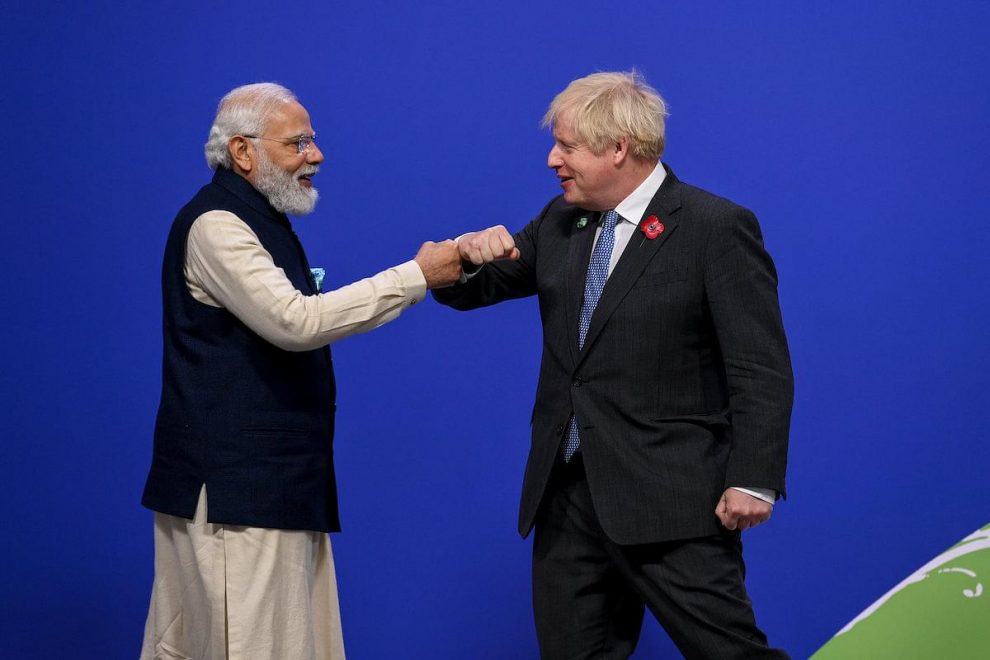 India and the United Kingdom launched a formal Free Trade Agreement (FTA) negotiation on 13 January.  The talks began between Indian Minister for Trade Piyush Goyal and his counterpart Anne-Marie Trevelyan who landed in New Delhi the previous day. The first round of negotiations was to be conducted in New Delhi; the subsequent sessions will be held every five weeks as the next one will take place in London.

Both countries agree to skip the ‘sensitive issues’ by entering into a “harvest agreement”, which is an interim arrangement to cover the mutually agreed areas and to resolve the contentious ones later on. The harvest agreement seeks to cover 65 goods and 40 per cent of services. Note that New Delhi has had similar interim agreements before and is negotiating one with Australia as a precursor to a long pending Economic Cooperation Agreement.

Understandably, early harvest agreements are like front-runners to full FTAs. They cover a limited list of goods and services. But the problem is that such agreements aim at easier items like the low-hanging fruits and leave out the difficult areas for a later time. In the process, they cause long delays for the final conclusion of FTAs. India has signed an early harvest agreement with Thailand in 2004, but no FTA so far. A similar agreement has been done with Sri Lanka but not a conclusive one yet.

Furthermore, early harvest agreements incur legal objections from members of the World Trade Organisation (WTO) which is meant to check discriminatory practices etc. But the FTAs do not face such legal hurdles. FTA is understood to mean a group or two countries enter in to an agreement in which duties and other trade barriers are eliminated on “substantially all trade” between WTO member countries that are signatories to an FTA.

According observers, India may be taking a tactical step to secure minimum commitments and allow the contentious issues to be resolved later. For Britain, it is trying to broaden post-Brexit accords with other countries. Also, given the EU’s lack of movement on a trade agreement with India, an India-UK Agreement will be a big score for the UK.

On current trade negotiations, India seeks to achieve greater market access for textiles, leather goods and marine products.  The United Kingdom, on the other hand, has strengths in areas like high-end machinery and technology and could gain more market access in India. In this context, the UK welcomed India’s recent reforms including changes in retrospective taxation.

Moreover, while India is looking to gain more flexible visa norms for its professionals going to the UK apart from lower tariffs on certain goods, the UK expects India to lower import duties on whiskey and automobiles, apart from simplified customs procedures and standards.

While speaking at the occasion, Piyush Goyal stated that both countries are committed to completing the UK-India Free Trade Agreement (FTA) negotiations in roughly a year. Moreover, Trevelyan, has described the India-UK Free Trade negotiations as a “golden opportunity.” Securing a trade agreement with India, which is on track to be the world’s third-largest economy by 2050, will provide Britain with a number of commercial benefits.

The joint statement issued during the talks read, “The India-UK bilateral trading relationship is already significant, and both sides have agreed to double that bilateral trade by 2030, as part of Roadmap 2030 announced by Prime Minister Narendra Modi and Prime Minister Boris Johnson in May 2021. India and the UK will seek to agree to a mutually beneficial agreement supporting jobs, businesses, and communities in both countries.”

Furthermore, in the coming months, Goyal and Trevelyan stated the two nations will look towards establishing an early harvest trade deal. The interim agreement would deal with 50 to 60 services from a total of 160.  It was also asserted that the FTA will be completed by the end of 2023. And with the help of FTA, the bilateral trade will reach 50 billion USD by 2030.

The joint statement said that the next meeting of India-UK Joint Economic and Trade Committee (JETCO) will take place in London to review the progress made in the talks and to celebrate achievements across the breadth of the trade, economic and investment relationship between the two nations.

Kevin McCole, Managing Director of the UK India Business Council (UKIBC), said in an interview amid ongoing discussions between the two countries on the trade deal, that new and existing businesses were keen to invest in India after the country’s latest reform on retrospective taxes.  He added that the India-UK free-trade agreement should include a data adequacy agreement that facilitates the cross-border movement of personal data based on mutual need.

Alignment in data protection rules has come up as a significant point for discussion, with remote work becoming a norm and several services such as education, healthcare, shopping, and banking increasingly being done on digital platforms in both countries.

“We would like to see the FTA include provisions that support core features of a thriving international digital environment — cross-border data transfers, personal information protection, and mechanisms to promote interoperability among privacy law frameworks, transparent access to government information, and consumer protection and choice online,” McCole said.

Recall that the UK has entered into a data adequacy agreement with the European Union post-Brexit. The agreement allows personal data to flow freely from the European Union and wider European Economic Area (EEA) to the UK. As a result, businesses and organizations in the UK can continue to receive personal data from the EU and EEA without having to put additional arrangements in place with European counterparts, as per the agreement.  Such an agreement supports trade, innovation, investment and assists with law enforcement agencies tackling crime.

But India is yet to bring out its data protection law, even as a joint parliamentary committee has given 99 recommendations to alter the draft bill to include personal and non-personal data, processing critical data locally, and reporting data breaches within 72 hours. Many India-watchers suggest that it will help to attract more foreign investors to India including from UK.

The impression drawn from the talks is that an early harvest trade deal may be concluded within the next three months while a comprehensive FTA will come by the end of financial year of 2023. India has 10 FTAs and 6 PTAs- Preferential Trade Agreements, negotiating 16 new ones and expanding 7 existing ones. New Delhi needs to operate them efficiently and have more such agreements to be a major part of new supply chains. That is the way to build the economy which is a dire need in the present geo-political context,