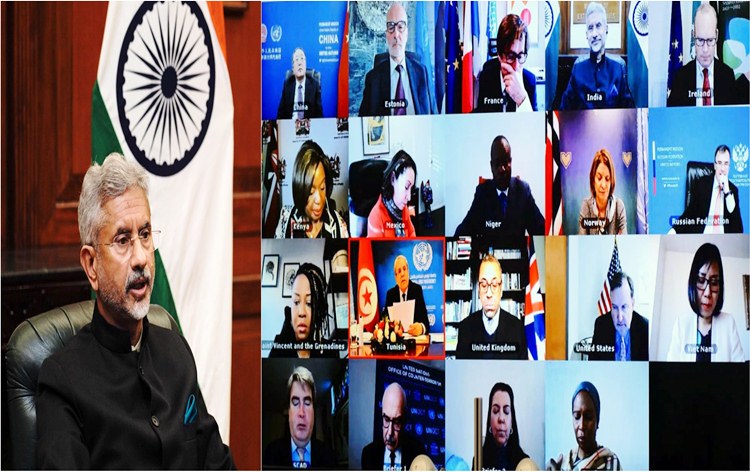 External Affairs Minister Dr. S Jaishankar has said that COVID-19 has further aggravated the terrorism concerns for the world.

Speaking at the United Nations Security Council open debate on the topic of Threats to International Peace and security caused by terrorist acts, Dr Jaishankar said the economic uncertainty caused due to the pandemic has made the radical extremist ideologies more susceptible towards terrorist activities.

External Affairs Minister proposed an eight point action plan in order to combat the menace of terrorism. He said, the council should not countenance double standards in their battle against terrorism.

Dr. Jaishankar added that there are no good and bad terrorists. He asserted, those who propagate such distinctions have an agenda and those who cover up for terrorists are equally culpable. He urged the council members to stand united in the fight against terrorism. Dr. Jaishankar exhorted that linkages between terrorism and transnational organized crime must be fully recognized and addressed vigorously. He said, India has seen crime syndicate responsible for the 1993 Mumbai bomb blasts not just given State protection but enjoying 5-star hospitality in that country.

External Affairs Minister gave a call to all the member nations to fulfill the obligations enshrined in the international counter-terrorism instruments. He said, enlisting and delisting individuals and entities under the UN sanctions regimes must be done objectively and not for political or religious considerations.

Dr. Jaishankar also pointed out that some nations lack legal and operational frameworks and technical expertise to detect, investigate and prosecute terrorist financing cases. He said, on the other hand, there are nations that are guilty of aiding and supporting terrorism and provide financial assistance, safe havens to them.

Dr. Jaishankar said, in recent years, the terrorist groups and lone-wolf attackers have enhanced their capabilities by gaining access to emerging technologies, including drones, virtual currencies and encrypted communications. He said, social media networks have contributed to radicalization and recruitment of youth.

The External Affairs Minister called for enhanced United Nations coordination with FATF for checking the financial aid to terrorist organisations. He called for a relook at the functioning of the various committees in this regard and asked for greater transparency, accountability and effectiveness.