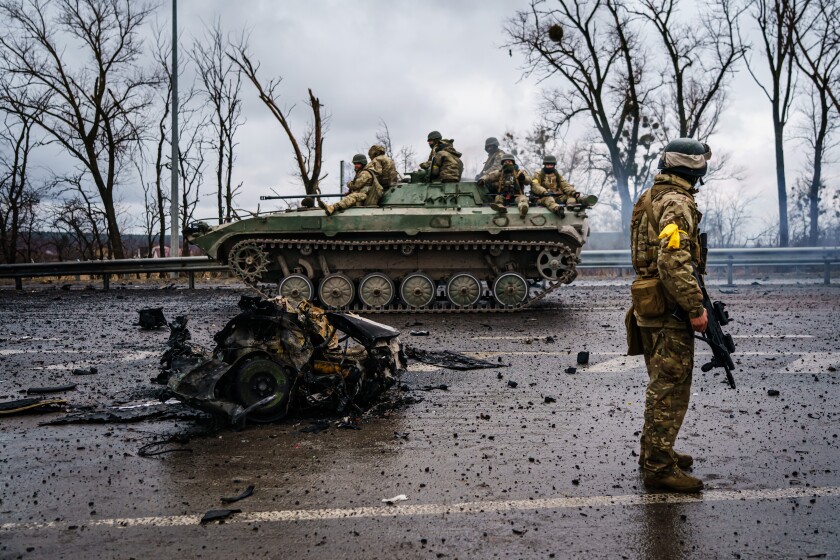 The war in Ukraine is raging unabated. There is no sign of it ending in near future although Ukraine has blinked. The Ukrainian leadership has hinted that they may not join NATO. It could be anybody’s guess if Putin will pull back after this assurance. It is doubtable as Russian President Putin thinks Ukraine is an inseparable part of Russia for reasons now known in public domain. So, on Putin’s part, war is unlikely to be terminated until he feels that Ukraine is under Russian grip through a proxy government or otherwise.

The likelihood of continuation of war in Ukraine increases with the lame-duck response to it from the Western powers. Putin seems to have a field day with no effective resistance from Ukraine, no direct response from the West except diplomatic efforts and sanctions, and more important, India and China supporting Russia in their respective ways.

As an independent and sovereign country reels under invasion by a powerful neighbour, a former super-power, we assess the response of other countries; middle powers like India aspiring to be a super-power, albeit in a ‘multi-polar world’, or a Vishwa Guru. The media in India, and indeed, many observers and commentators have applauded India’s position of neutrality vis-à-vis the ongoing war.

But, to be accurate, one may ask the obvious question, is India really neutral? The answer is no. India has supported Russia, making some murmur about her unease on the war, calling for diplomatic solution to the crisis, while recognising Russia’s concerns. Prime Minister Narendra Modi did make a phone call to Ukrainian President Volodymyr Zelenskyy. What exactly transpired between them is not known?

It has been reported that Modi extended moral support to Ukraine President reiterating the use of diplomatic route to end the war, and hostilities. He also urged the President to help evacuate the Indian students still stranded in Ukraine’s towns. That is commendable as getting the Indians out of a war zone is a national concern. It is right for Modi and South Block to  focus on evacuating the  students.

Beyond that, the government spokesperson and their supporters maintain that India’s position on war on Ukraine is in keeping with her national interest. As events unfolded before and during the war –namely the breach of word and trust by Americans and their allies on expansion of NATO to the East, Putin’s conviction of Ukrainians being of the same stock and history as Russians are, the allusion by Putin to the ‘Soviet Imperium’ comprising Russia, Belarus and Ukraine — New Delhi asserts that India’s stand on the war is vindicated and her national interest is protected. India has been prudent.

At present India is in competition and conflict with China. It is an asymmetrical contest. China is much bigger than India in size, economy and military. Therefore, India needs to have friends and partners to defend herself. Could Russia be an ally vis-à-vis China. Yes, in a sense. Russia would like to have China and India as its friends in facing the West. Russia could persuade China to accommodate India if New Delhi agrees to play second fiddle to both. Is that prudent? Should India be in the camp of China, Russia North Korea and Pakistan? This is like sleeping with two enemies at the same time. Is it in our national interest?

On the other hand, could India rely on America and its allies to come to her rescue in the event of a conflict, armed or otherwise with China and Pakistan. Russia may remain neutral. New Delhi has not done enough with USA and vice-e-versa to be sure of such support. USA’s foreign policy under Biden has weakened. Yet, is it easier for India to deal with democracies, work with them, lobby and reason with them as there are multiple channels of contact, compared with dictators and autocracies.

Understandably, there is, remarkably, large latitude countries are allowing themselves in taking positions, in the name of defending their national interests. It is in America’s national interest, not to lose India despite the latter’s pro-Russian position as the former is in competition with China for world supremacy. It is in India’s interest not to lose Russia in her face-offs with China. That is why America wants India in the Quad, and New Delhi needs to be in BRICS and SCO etc. to rub shoulders with Russia.

All in all, India’s position on Ukraine should be dictated by the kind of international politics New Delhi would want to be a part of. The war on Ukraine has three dimensions — historical and emotional, security, and political. Historical argument is contested by many historians who accuse Putin of twisting history. The emotional aspect is dismissed as impractical. The security angle is one credible argument that could in fact provide the basis for solution. The political dimension should engage all the countries in the world, at least those believing in a rule-based democratic order.

Let us recall the famous words of the German philosopher Carl Von Clausewitz, “War is merely continuation of politics by other means”. Scholars have disputed this formulation. They argue that the translation from German to English was botched up. But Clausewitz’s words could be interpreted by the nature of politics one embraces, it determines whether war is the solution or negotiation is the way to address the problems of fear, suspicion and insecurity.

New Delhi’s position, sadly, endorses war as a political instrument while making a moral plea for diplomacy. On national interest, the jury is still out. We believe and world perceives India to be the upholder of democracy and progressive values shunning violence and derecognising war as means to achieve any end. India’s realpolitik should consist of promoting peace and building its economy. It lies in catching up with China in economic strength. India could do so by reducing its expense on defense, ruling out use of force as the BRICS resolution said six months ago. It is in India’s national interest to be part of a democratic world, not dictators.

So, New Delhi must make amends. Be pro-active in finding a means to end the war in Ukraine, that is by making Ukraine a neutral country, saying to the Americans to pull NATO back from the East and to the Russians that they should accept the disintegration of Soviet Union as a fact of life, and not to revive the Union by force.

In parenthesis, if Gorbachev was responsible for breaking up the Soviet Union, and if Putin is re-uniting them, it is an internal matter of Soviet Union. Let India take that position. Is that maintainable? At any rate, New Delhi needs to articulate its stand on Ukraine. Abstaining from voting in UNSC or General Assembly or in the Human Rights’ body is not enough. India needs to speak up for or against the invader. I have argued for India to join the democratic world but if it is in India’s interest to stay with Russia, let New Delhi say so. Keeping quiet sends wrong messages.—INFA