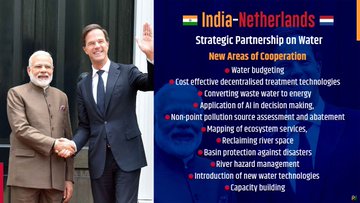 India and the Netherlands have announced the launch of the strategic partnership in water sector to further intensify ongoing cooperation and better coherence in the area. Addressing the media in New Delhi after the India – Netherlands Virtual Summit held between Prime Minister Narendra Modi and his Netherlands counterpart Mark Rutte, Joint Secretary in the External Affairs Ministry Sandeep Chakravorty said that both leaders have agreed to elevate the joint working group on water to a Ministerial Level.

They also discussed to broaden bilateral cooperation in new areas of water including water budgeting, cost effective decentralise treatment technology, converting waste water to energy and river hazard management. He said, both sides have announced the setting up of fast track mechanism to facilitate bilateral trade and to resolve issues of Dutch and Indian companies.

Mr Chakravorty said that the two countries also discussed collaboration in the field of agriculture, Urban Development and Space. During the Summit, Prime Minister Modi suggested setting up of a joint working group for the cooperation between the two nations in the field of millets. On regional and global issues, the two leaders reaffirmed the commitment to  multilateralism and agreed to work together towards challenges  of climate change, counter-terrorism and Sustainable Development Goal and pandemic.

In a joint statement,  both leaders also reiterated their commitment to ensure equitable and affordable access to Covid19 vaccines to all countries and agreed to cooperate in this regard. The Netherlands acknowledged that India’s production capacity of Covid19 vaccines is crucial for the success of global efforts in tackling the pandemic and appreciated India’s supply of Covid19 vaccines to more than 80 countries.  Both Prime Ministers agreed that the ambitious and innovative flagship programs like Clean India, Digital India, Make in India, Sagarmala, Ayushman Bharat and Startup India have provided immense opportunities for Indo-Dutch collaboration in multiple sectors.  They also  expressed satisfaction that despite Covid19 related constraints, the investment flows between the two countries continued to rise making the Netherlands the 3rd largest FDI investor in India and India the fourth largest FDI investor in the Netherlands in the year 2019-20. They welcomed the joint announcement on setting up a bilateral Fast Track Mechanism for investment facilitation and issue resolution.

India welcomed the Netherlands’ guidelines on the Indo-Pacific which recognises the importance of the region for global peace, security and prosperity and identifies India as a key partner to engage with. Both leaders emphasised the close convergence between each others vision for a free, open and inclusive Indo-Pacific.  Two Prime Ministers acknowledged that the richness of the relationship between India and the Netherlands is a result of the long standing people-to-people contacts and agreed to further promote greater awareness and mutual understanding through enhanced cultural cooperation.