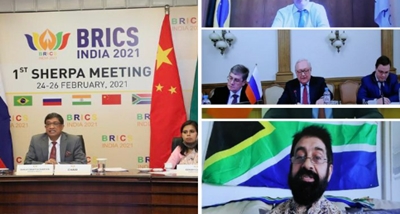 ndia has kicked off its BRICS Chairship with the inaugural three-day-long Sherpas’ meeting. Ministry of External Affairs (MEA) Spokesperson Anurag Srivastava said Secretary (CPV & OIA) chaired the meeting and introduced our themes, priorities, and calendar for for BRICS 2021. He said, India looks forward to continuing productive discussions with our BRICS partners over the next two days.

Chinese President Xi Jinping may visit India later this year for BRICS summit. Chinese Foreign Ministry spokesman Wang Wenbin said BRICS had become an influential grouping and Beijing supported New Delhi’s efforts as host. Wang told a regular press conference that China attaches great importance to the BRICS mechanism. He said, Chinese side supports the Indian side in hosting the meeting and is willing to work with India and other BRICS countries in expanding cooperation on economy, politics and people-to-people exchanges.