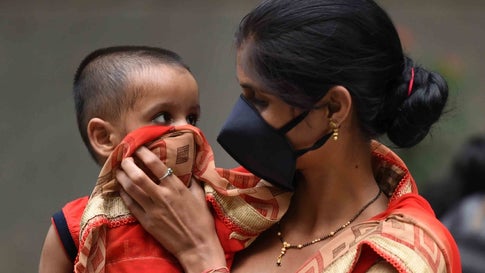 The COVID-19 pandemic and measures to contain it have had inevitable negative impacts. Rising unemployment, food supply disruption, a downturn in international trade, etc, pose serious challenges to the already precarious Indian food and nutrition security. Women and children will continue to bear a disproportionate burden of the pandemic-accelerated health and food crisis.

There are about 189.2 million undernourished people in India; a majority of whom are women and children. Malnutrition and the widespread prevalence of stunting, wasting, and nutritional deficiencies among women and children are well-recognised elements of India’s profile in the Global Hunger Index.

The prevalence of undernutrition and anemia among almost half of the women in India, especially pregnant women, puts a serious burden on the country’s food security. This is predominantly because undernourished mothers can trigger cycles of undernutrition by passing on nutrient and vitamin deficiencies to newly born babies.

These statistics indicate that undernutrition in India is a gendered problem. The root cause for these male-female differentials can be found in native socio-cultural norms and mindsets. Such norms, rooted in patriarchy, would suggest that distribution of resources—including food—should be done in a hierarchical manner, with male members of the family typically at the top of the ladder.

This perception problem is compounded by factors such as poverty, access to public health facilities, decision-making power, etc, which widen the gender gap in access to food and nutrition.

The pandemic has threatened India’s food security landscape across all four indicators: availability, access, stability, and utilisation of resources. It could in turn further intensify the existing problem of malnutrition among women and children.

The country-wide lockdown led to a sudden cessation of economic activity and triggered large-scale unemployement. According to a joint report by the International Labour Organisation (ILO) and the Asian Development Bank (ADB), nearly 4.1 million Indians have lost their jobs during this time.

People often adopt coping mechanisms such as purchasing less food, substituting wholesome food with less nutritious alternatives, and decreasing the number of meals eaten on a day-to-day basis to deal with the crisis and reduced incomes. A reduction in financial security risks increasing gaps in intra-household distribution of resources, which could further negatively impact women in the household. Further, women account for 81 per cent of the country’s workforce employed in the informal sector. The pandemic’s impacts also cut off their access to steady jobs and salaries.

The disruption of food supply chains, labour shortages, limited production, and restricted mobility also have a direct bearing on pregnant women’s food and nutrition consumption. For instance, a shortage of fruits, vegetables, meat, fish, eggs, etc could potentially compromise nutrient supply to pregnant women and new mothers. This in turn accelerates undernutrition and lowers immunity in the midst of a pandemic, making them more prone to infections and diseases.

COVID-19 has also substantially affected the network of government-run health and development centres, popularly known as Integrated Child Development Services (ICDS). These centres are responsible for providing food and primary healthcare, among others, to children below six years of age, and mothers—especially those from low-income-families—through anganwadi workers.

Although the Delhi government on 25 August announced the resumption of work by ICDS centres and anganwadi workers, it also noted that issues related to hunger and malnutrition would not be covered in the scope of activities.

There are clear pathways in which the pandemic intersects with a fragile food and nutrition security landscape in India. Together, this will very likely have a disproportionate impact on women and children, as detailed above. Conversations around how resiliency can be built into addressing the widening gender gap in access to nutrition must thus play a bigger part in policy considerations.

Akanksha Khullar is a Researcher with IPCS' Centre for Internal and Regional Security (IReS). Kavya Sharma is a Research Intern.

China in Africa: COVID-19 and the Politics of Largesse
Converging Priorities: India, France and Germany in the Indo-Pacific
Comment