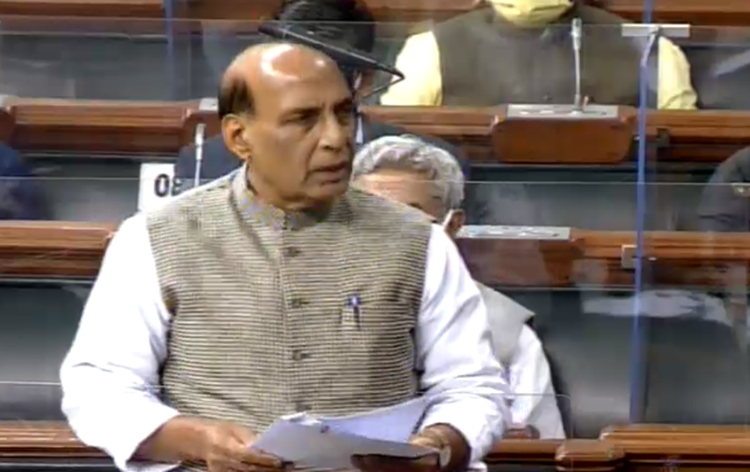 Defence Minister Rajnath Singh said in Lok Sabha that India will not give even an inch of its territory to anyone. Making a statement in Lok Sabha regarding the present situation in Esatern Ladakh, the Defence Minister said the agreement envisages that both sides will cease their forward deployments in a phased and coordinated manner.

He said that since last September, both India and China have maintained communication with each other through military and diplomatic channels.

The Defence Minister said the Indian Armed Forces responded to challenges by unilateral Chinese action and have showed immense valour and courage on both the South and North bank of Pangong Tso.

Earlier, Giving a statement in the Rajya Sabha, Rajnath Singh has informed that India and China have agreed for disengagement in the North and South bank of Pangong Lake in Eastern Ladakh and assured that the nation’s approach and strategy for negotiations with the Chinese side has been guided at the highest level by Prime Minister Narendra Modi’s resolve not to give one inch. The Minister said, the tenacity and approach of the country during talks have yielded results.

Highlighting the details of the agreement, he  informed that both sides will cease their forward deployments in a phased, coordinated and verified manner. He said, the Chinese side will keep its troop presence in the North Bank area to East of Finger-8.
Reciprocally, the Indian troops, he said, will be based at their permanent base at Dhan Singh Thapa Post near Finger-3. The Defence Minister said, a similar action would be taken in the South Bank area by both sides.