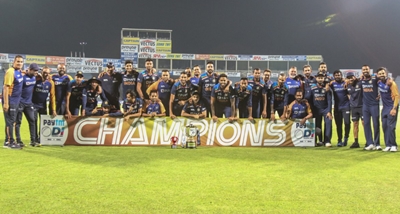 In Cricket, India beat England by seven runs in the third and final ODI in Pune last night to clinch the three-match series 2-1. Chasing a victory target of 330 runs, England could only reach 322 for nine in 50 overs, with Sam Curran smashing an unbeaten knock of 95 runs in 83 balls. He was declared Player of the match.

England batsman Jonny Bairstow was awarded the Player of the Series as the opener amassed 219 runs in the ODI series. Shardul Thakur was in top form for India, returning with four wickets and Bhuvneshwar Kumar scalped three dismissals. Also, T Natarajan took a wicket and held his nerves in the final over to take India to a thrilling series win. Earlier, the hosts were bowled out for 329 runs in 48.2 overs.

Virat Kohli-led side have now won all the series’ in this England’s tour of India. India claimed the Test series 3-1 and then won the five-match T20I series by 3-2. Board of Control for Cricket in India (BCCI) Secretary, Jay Shah congratulated the Indian team following their 2-1 series win in the ODIs, saying that the hosts winning the limited-overs series after the Test series win is a “testament of consistency across formats”.

The BCCI Secretary also thanked England and Wales Cricket Board (ECB) for their commitment towards the series. British High Commissioner to India Alex Ellis also congratulated the home side for winning all the series’ of the tour.