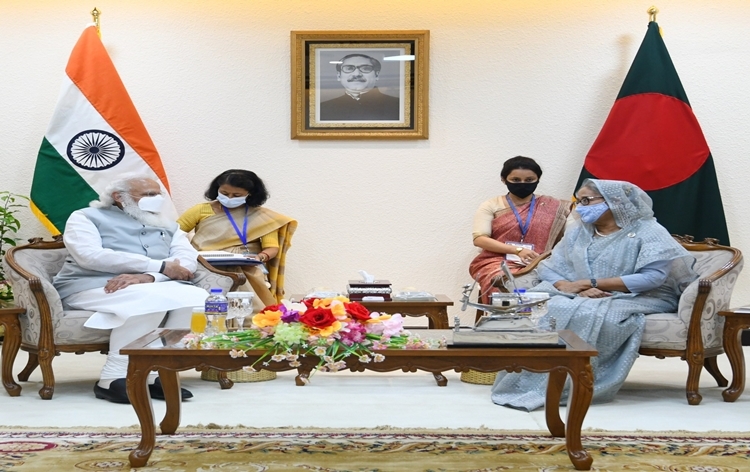 The talks between the two leaders were marked by great warmth and cordiality. The two leaders expressed satisfaction at the excellent state of bilateral relations, based on deep historical and fraternal ties, which reflect an all-encompassing bilateral partnership based on equality, trust and understanding. Recognizing that terrorism remains a threat to global peace and security, both sides reiterated their strong commitment to eliminating terrorism in all its forms and manifestations.

India and Bangladesh yesterday signed MoUs in key sectors including trade and technology to foster bilateral ties after talks between the two leaders.

Mr Modi and Ms Hasina virtually inaugurated several projects during Prime Minister Modi’s visit to Bangladesh.
The two leaders unveiled the foundation stone for the construction of a memorial at Ashuganj honoring the martyrs of Indian armed forces in the 1971 Liberation War of Bangladesh.

This is the third passenger train after Maitree Express (Dhaka-Kolkata) and Bandhan Express (Khulna-Kolkata) running between the two neighbouring countries.

Briefing the media about Prime Minister Modi’s Bangladesh visit, Foreign Secretary Harsh Vardhan Shringla said, the service will start when normalcy is restored. Both countries had suspended railway services after the COVID-19 pandemic broke out.

Mr Shringla said, the two countries agreed to start a new era of cooperation in the Civil nuclear and space sectors. The Prime Minister also laid the foundation stone for infrastructure development for power evacuation facilities from the Rooppur Nuclear power plant.

Three border haats were also opened along the India-Bangladesh border.

Earlier, on the concluding day of his two-day visit to Bangladesh yesterday, the Prime Minister visited places of historical importance and temples in Bangladesh. Addressing the Matua community at Orakandi, Mr Modi said, both India and Bangladesh want to see stability, love, and peace in the world instead of instability, terror, and unrest.

Mr Modi offered prayers at the centuries-old Jeshoreshwari Kali temple at Ishwaripur village in Shatkhira district of Bangladesh yesterday.
This was Prime Minister Modi’s first visit to a foreign country after the outbreak of COVID-19. The visit coincided with epochal events – celebrations of the Golden Jubilee of the Independence of Bangladesh, the birth centenary of the Father of the Nation Bangabandhu Sheikh Mujibur Rahman and 50 years of establishment of diplomatic relations between India and Bangladesh. 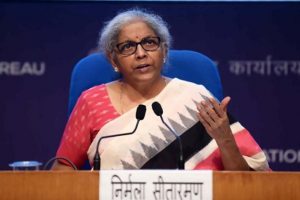