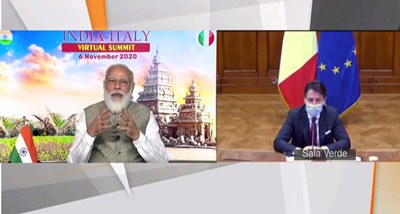 The Summit provided an opportunity to the two leaders to comprehensively review the broad framework of the bilateral relationship. The two leaders reaffirmed their commitment to strengthen cooperation against common global challenges, including the Covid-19 pandemic. The leaders discussed a wide range of issues including political, economic, scientific & technological, space and defence cooperation.

In his opening remarks, Prime Minister Modi said that COVID-19 pandemic will remain a watershed moment in history like World War II. Mr Modi said, the world will have to adapt to the post-Corona scenario and be ready for the opportunities and challenges arising out of it.

Prime Minister Modi expressed his condolences on behalf of people in India, for the losses due to COVID19 in Italy. He said, Italy swiftly and successfully brought the situation under control. The Prime Minister said, like Mr Conte, he is also committed to deepening the relations between India and Italy. He expressed happiness that after the talks between both in 2018, there has been a lot of momentum in mutual exchanges.

Briefing Media after the Summit, Joint Secretary (Europe-West) in the Ministry of External Affairs Sandeep Chakravorty said it was the fifth interaction between the two leaders in the last three years. He said, the whole focus of the discussion was on economic ties. The Joint Secretary said, the entire gamut of bilateral relationship was discussed along with regional and multilateral issues. He added that Italy is an important partner in New technologies and green technologies.

Mr Chakravorty said a lot of investment decisions have been made between private sector entities. The Joint Secretary said, both sides also decided to work closely on concluding at the earliest the migration and mobility partnership agreement. He said, there was discussion on India-EU FTA and Prime Minister Modi mentioned about 15th EU-India Summit which was held in July this year. He said, Prime Minister of Italy invited Prime Minister Modi to jointly participate and engage in the 700th birth anniversary of supreme poet Dante Alighieri.

The India-Italy virtual bilateral provided an opportunity to the two leaders to comprehensively review the broad framework of the bilateral relationship. Mr Modi and Mr Conte  reaffirmed their commitment to strengthen cooperation against common global challenges, including the Covid-19 pandemic.

The leaders discussed a wide range of issues including political, economic, scientific and technological, space and defence cooperation. On regional and international issues, both sides agreed to coordinate closely at multilateral fora especially G-20. Italy will assume the Presidency of G-20 in December 2021 followed by India in 2022. Together, India and Italy will be part of the G20 Troika from December this year. India welcomed Italy’s decision to join the International Solar Alliance as soon as the ratification process is completed. 15 MoUs and  Agreements in various sectors such as energy, fisheries, ship building, design etc. were signed coinciding with the Summit.