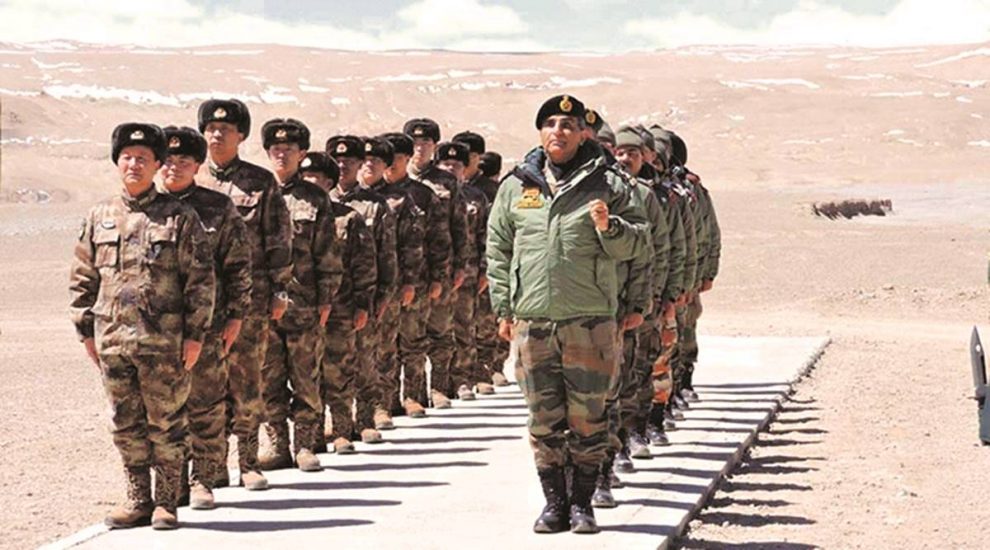 Conflict in 2020
In May 2020, China started disrupting India’s normal patrolling in the area and tried to transgress the LAC. This caused tensions in the border areas. The senior commanders of India and China’s army met to ease the tension and reached on a process for de-escalation and disengagement along the LAC. As the Indian soldiers tried to stop the construction, Chinese soldiers resorted to violent measures. It resulted in causalities of 20 Indian soldiers and an unknown number of Chinese soldiers. The use of weapons by the Chinese army violates the agreement signed by India and China in 1996.

The situation at the LAC further deteriorated when there was firing at the LAC. On 7 September 2020, warning shots were fired on the Line of Actual Control (LAC) since 1975. It was for the first time in 45 years that a gun was shot. On 10 September 2020 External Affair Minister of India, S. Jaishankar and State Councillor and Foreign Minister of China met each other on the Shanghai Cooperation Organisation sidelines in Moscow. The meeting was held to discuss the developments in the India-China border area. After the discussion, they issued a Five-Point Action Plan or New Panchsheel in a Joint Press Statement. It was the first joint statement from both sides on the development. It stressed on the guidance from the series of consensus of the leaders so that the differences do not become dispute; the border troops should continue their dialogue, abiding all the existing agreements and protocol on the boundary, dialogue through Special Representative and the Working Mechanism for Consultation and Coordination and as the situation eases, the two sides should expedite work to achieve new Confidence Building Measures to maintain and enhance peace and tranquility in the border areas. The Chinese Ministry of Foreign Affairs released a separate statement with their version of the developments.

Until now, there has eight been round of commander level talks with limited progress on the stand-off.

The context to the Galwan Valley stand-off can be traced back to India’s building near the LAC. India’s Border Road Organization has built a road-Darbuk-Shyok-DBO road. It is located in eastern Ladakh and runs perpendicular to the Galwan river. In order to connect this road to the LAC, India was attempting to build feeder roads. The road would reduce travelling time of the Indian soldier to the LAC. This development has irked China.
From a Chinese perspective, the development has to be seen from a combination of factors responsible for the LAC’s assertive Chinese behaviour. In 2020, Chinese aggressive behaviour was seen in the South China Sea, the East China Sea and Taiwan. This was also the time when coronavirus pandemic was spreading rapidly in China. The protest in Hong Kong also amplified during this time. The Chinese citizens started thinking that the government has started losing its control over the “two centennial goals” of building a moderately prosperous society by 2021 and to build a socialist country that is prosperous, strong, democratic, culturally advanced and harmonious by 2049 (100 years of the founding of China). In February 2020, Xi Jinping started taking control of the party and placed his people at different places. Hence, China started asserting itself by taking control of Hong Kong, flexing its muscles in the East and the South China Sea and issuing strong statements on Taiwan. Xi Jinping felt secured, in pushing his aggressive policies to strengthen his position. Therefore, he engaged in a series of geopolitical conflicts to create a distraction from its governance failures.

Perspectives in 2021
In the coming year, the military talks are likely to continue with limited progress. The eight-round of talks were held on 6 November 2020 but it ended in a deadlock. The ninth round of talks has been delayed due to the appointment of a new army commander of the People’s liberations Army (PLA). China has appointed a new commander of the PLA Western Theatre Command (WTC). The WTC is the largest of the PLA’s five theatre commands and is the location of the ongoing stand-off. General Zhang Xudong will be replacing General Zhao Zongqi. Xi Jinping is the head of the Central Military Commission (CMC) and personally attended his promotion and appointment in the Defence Ministry in Beijing. Before his new appointment, General Zhang had served in the erstwhile sensitive Shenyang MR, responsible for the borders with North Korea and Russia. General Zhang will execute Xi Jinping’s plan in the disputed area, and with his appointment, India should expect any easing of tension. In a related development, the individual PLA soldiers will now be equipped with a new type of tactical information system. This will help them to share real-time combat dynamics that will boost their combat capabilities in the mountainous regions. The Indian side is also increasing its military personnel at the borders. The Indo-Tibetan Border Police (ITBP) is already preparing to raise seven new battalions, making the strength at the border around a lakh at the LAC.

Against these occurrences, any development on the LAC should not be expected sometime soon. There is no sign of comprising on both sides. The increasing number of soldiers on both sides of the LAC indicates increasing tensions at LAC. The military-level talks and other CBMs will continue with limited or little progress in the next year.

The external affairs minister has reiterated that: “Today, how we get the relationship back on track is a very big issue and we are very clear that maintaining peace and tranquility along the LAC is the basis for the rest of the relationship to progress.” Overall, the bilateral relations are at a very critical juncture.

Ethiopia: The conflict in Tigray and the regional fallouts
France: Needs to rethink the state-religion relation in battling extremism
Comment