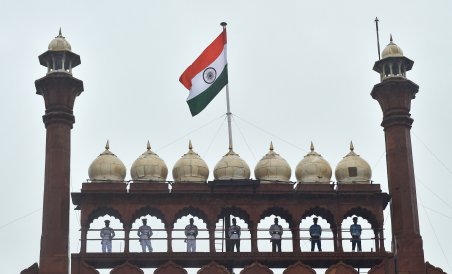 India is starting its 75th year of independence with a mixture of great expectations and disheartening disappointments amid lot of hopes and despair and still looks forward to building  a new prosperous, progressive, and inclusive India. It is an occasion for self-examination of our achievements and failures, our strong points and weak spots, and identify internal and external obstacles.

“Arise! Awake! And Stop Not till Our Goal is Reached”, should be the lesson to follow. The   road is already tough and is growing tougher with unforeseen catastrophies like Covid-19 pandemic, climatic changes causing frequent natural disasters, and political disturbances in nearby countries affecting us without our involvement.

What we have built in 74 years of independence must be protected and what we dream for future must be realised. The responsibility for this rests on the shoulders of the people of India and not just on the government as some are prone to think.

The theme of this Independence Day is “Nation First, Always First”. Why we have to remind  people of India to keep nation first after 74 years of freedom and sacrifices of several great men and women in varied fields to achieve that freedom and while working a vibrant democracy  echoing people’s voices through different media, and winning several world records and  achievements to be proud of is a little perplexing.

Why is there a doubt  that nation is not first in the minds of people and they have to be inculcated? Perhaps doubts rise from people’s expressed aspirations, open utterances, and considered action inconsistent with national interests. There are people occupying seats of power for whom, their State, their language (mother  tongue), their religion, and their community are dearer than the nation which comes last.

This Independence Day theme sounds different from that of last two years. Atmanirbhar Bharat” or Self-reliant India that was the theme in 2020 and “Support our Troops, Salute Our Troops”  which was the theme in 2019 denote a call for positive action. Significantly, 2018 theme “One Country, One People” was a reminder for unity similar to the theme of this year.

In 2015,  a specific  programme of  action, Swachch Bharat was chosen as a serious mission in our country. It was labeled “Towards True  Freedom” – freedom from dirt, squalor, and garbage. It specified some other freedoms also — freedom from financial untouchability (Jan Dhan Yojana), Freedom from Illiteracy for Girl child (Beti Bachao, Beti Padhao), Freedom from  Archaic Labour Laws (Sharam Dev Jayate), Freedom from being Unfunded (PM Mudra Yojana).

It is interesting to note that the theme adopted in the USA for 2021 Independence Day celebrated on  4th  July embraces  the importance of patriotism and brings forward to highlight the heroes of the past. It seems that globalisation that brings nations closer and closer economically has given rise to the need to awaken  national spirit that every nation, rich and poor, has to cherish for its  progress and prosperity.

South Africa also, which celebrated its liberation from colonial rule and the oppressive apartheid system on 27th April chose its theme appropriate to present days as “The Year of Charlotte Mazeke: The Meaning of Freedom under Covid-19”. The Government of South Africa  emphasises continuing vaccination programme and the fight against the virus. Despite making remarkable progress after independence, the country is facing massive inequality, poverty, and unemployment that block the way to national unity and social cohesion.

Charlotte Mazeke was a human rights activist who fought against political and other forms of  oppression along with her associates about 150 years ago when such defiance was sternly put down with unrelenting force. The choice of the theme confirms that there is a growing need in many parts of the world today to recall the sacrifices of past heroes particularly those who fought for freedom for the benefit of present generations and to rekindle patriotic spirits apparently  subdued under material progress.

South Africa, interestingly connects Freedom Day celebration with the message of unity in diversity. It is considered as the day to enforce a change in the attitude of people towards the unique and diverse ethnic, cultural and national background to inspire the people to be innovative  and build a better South  Africa together and excel in all aspects  of life.

This country reminds us to move towards Goal 16 of the Sustainable Development Goals, that is,  “Peace, Justice, and Strong Institutions”.

Sri Lanka celebrated 73rd Independence Day on 4th February with a theme “A Wealthy  Tomorrow: Prosperous Motherland”. Freedom heroes were also remembered. In  Mexico, where  freedom anniversary is celebrated on 15th September, the tradition of raising the cry of  patriotism  is  followed  with enthusiastic cry of  “Viva” (long live) by people.

Freedom Day celebration is an occasion for conveying to the entire  nation the message of  unity  in  diversity for all. It is a day to unite despite differences, and to feel the common sense of  Indianness. The celebrations aim at inspiring people to be innovative and determined to build a new India that will stand united by thoughts, deeds, and aspirations and cherish its rich  diversities as the wealth of the nation and not as hindrances to its unity. Faith in one’s religion   need not make us intolerant of other religions; pride in the richness of one’s language need not  deny to ourselves opportunities to learn other languages;  State  borders  need not mean the limit of  our concerns.

In India, Prime Minister Narendra Modi also declared that August 14 would be observed as  “Partition Horrors Remembrance Day” to acknowledge the pain and losses undergone by Indians due to the 1947 Partition. He said the day would remind Indians of the need to “remove the  poison of social divisions”. This declaration,  along with Independence Day theme of putting the  Nation First aims at strengthening the “spirit of oneness, social harmony, and human empowerment” which have to be the essential characteristics of our nation.

Will August 14 also act as deterrence to internal partitions? Even divisions of States within the country are not always smooth. They are preceded and followed by series of problems as in the North-East Region or even Andhra Pradesh  and Telangana.

This year’s Independence Day theme in India is addressed to formation of our priorities, and to  conditioning our thoughts and actions. It is day to celebrate “tricolour with liberty, beauty in  diversity, unity in differences, and brotherhood of the largest democracy in the world”. Five specific themes chosen under this are Freedom Struggle and Ideas, Achievements, Actions, and Resolves.

Globalisation is not going to bind the world together emotionally. It is also not intended to strengthen unity within a nation. We have a new task to ensure that globalisation goes along with patriotic sentiments,  national interests and needs.