Note: The book “The Demons of Jaitraya” takes off from the point right after the war in Ramayana is won, and Hanuman is entrusted with the task to find and kill the demons that may have gone hiding. It is a fantastic thriller set in the current times where the earth is seeing gruesome killings and mass illnesses and it’s now upon the brave warriors of Hanuman to free it from the clutches of the demons that are back from hibernation. Lord Rama had asked Lord Hanuman to raise and train a contingent of warriors who would take birth multiple times on Earth, to contain the demons. Aishani and Adheesh are two such warriors, blessed with divine weapons and powers to fight the world’s evils at present times. Read an excerpt from the book which describes the warrior Aishani.
Aishani knew that she was destined to learn so much more, an inkling of which she had when her father had taken her to the School of Warfare. She was around sixteen or seventeen years of age when she experienced violent dreams, dreams where she was either chasing someone or being chased. In her dreams, she would be absolutely calm and cold-blooded even though she would be seething from inside. Most of the times, she would be chasing and killing the monsters, but sometimes she would be racing away from them. She would wake up with her heart palpitating. Often there would be a blurred figure of a man beside her imparting mental and physical strength and succor to her. She would be aware of him yet not aware of him. Once, in one of these dreams, this shadowy figure was not there. She had felt as if she had less than half of her strength and hence she could not annihilate all the creatures. She woke up in great terror and sadness as if she had lost the most precious thing of her life. Aishani could not behave normally for a couple of days after these dreams. She would remain listless for days. Sometimes she would confide in Jayant about these dreams. He often gave a humorous explanation for her dreams which would lift her mood gradually. Though he did not confide in her, deep down he knew that the hazy man was Aishani’s partner from her previous births and they had always won every battle when they were together.
It was the killings which disturbed her so much. So many times she thought that she was chasing some beastly creatures who were screaming horrendously and trying to outrun her. They would be covered with blood; sometimes their arms or legs would be ripped or slashed and they would be begging her for mercy. And Aishani would be in such a rage that she would just hack through them and kill them. She would wake up covered in sweat and shivering with shock.
It would take her some time to get over the feeling of revulsion at the killings and the rivers of flowing blood and then realising that it was just a dream. Though in hindsight she never remembered the clothes she was wearing in these chases, she was pretty sure that they were not clothes of contemporary times. Sometimes she would wake up in the middle of the night with a jolt, her heart thudding, her body shaking and her teeth chattering. She had to get up to drink water as if she had actually run for miles. The dreams rapidly became a routine affair. Sometimes she saw the creatures getting the better of her and killing her instead. Many times Aishani was scared to go to sleep as she was positive that she would get the same disturbing and frightening dreams again. One night, after yet another horrendous dream, she went and sat on the verandah with a glass of water. Sleep was out of the question now. She just sat there, mutely staring at the grass and the tall dark trees with their long shadows.
“Ash!” It was her father. “Why are you sitting here beta, why aren’t you sleeping?”

She looked up. She knew that sometimes her father took a night stroll around their garden, so it was no surprise that he was there.

“Nothing baba, I couldn’t sleep,” she shook her head clearly disturbed. There were tears in her eyes.
“Ash beta, what happened?”
“I don’t know baba, it’s these dreams I have every night. I just cannot sleep after that.”
“What kind of dreams beta?” Pandit Ram Sharan asked her softly. He had an inkling of the kind of dreams Aishani was having. In fact, he had even been waiting for these dreams to take place. It was time.
“Oh baba,” Aishani was almost sobbing now, “Baba I see myself in a sort of jungle and I am chasing somebody with all intentions of killing it or him. Then baba, sometimes I see that somebody is laughing maniacally and chasing me, and though I am not afraid I want to escape very badly.”
“Is it always the jungle beta? Do you remember the thing which you had been chasing or the thing that chases you? Try to remember.”
Aishani tried hard to remember, “Not really baba, but it did seem to be a big and grotesque creature. Sometimes the creature and I would be fighting in the air and sometimes in the water. I always become breathless in the water in the dream as if, as if I will swallow water and drown! Baba how can I get rid of these dreams?” she asked, her eyes welling up with tears again.
“Go back to sleep beta, you will not get the dreams again,” her father put his hands over her head and recited some mantras silently and then blew on her forehead. “Get a good night’s sleep. Sleep late if you want. Tomorrow your mother and I will sit together with you and talk.”
“Yes baba,” she said then turned, “Why baba, is it very important?” Aishani’s mother never interfered in her father’s teachings. There had been only a couple of instances when both her father and mother had sat down together to seriously talk to their children. Her parents had such a bond that they instinctively knew and supported each other. Moreover, her mother was most of the time busy with the household chores.
“We will talk in the morning. You go and sleep comfortably now,” Pandit Ram Sharan said tenderly. After she left, Pandit Ram Sharan sat down for some serious thinking.

On the one hand, he was elated. These dreams meant that Aishani was being reminded about her past births in bits and pieces. It also meant that she was now ready to be admitted in the College of Warfare otherwise known as Gurukul. But it was no ordinary school like in ancient times. It was that and much more. There were no Gurukuls in India now and the few that were there were so secretively hidden that no one knew about them. Only a handful of the lineage of great pundits and scholars and warriors knew about them. Such people were so committed to their cause and destiny that there was no question of any of them divulging anything about these Gurukuls.

On the other hand, Pandit Ram Sharan was feeling a deep sense of loss and heartache that his sweet and innocent daughter would now learn and perform the acts which were against her very basic human nature of this birth. He also had no doubt that gradually she would remember quite a lot of her previous births, though not all, but enough to understand and recognise her destiny and be captivated by it. There would be no greater achievement for her than the destruction of the demons who had so cunningly and intelligently managed to escape their destruction in the great war between Bhagwan Ram and the king of demons Ravan. This was the sign that the whole of Gurukul was waiting for, these dreams of Aishani. These dreams meant that Aishani was now ready to face her past births and hence her future.

The next day they woke up very early. It was still dark. Aishani sat opposite her father and mother at the table in the library. There was nobody in the house. The puja shop would be opened later in the day. Jayant had gone on one of his school excursions. Aishani knew that something very important was going to be told to her as her father and her mother had never chosen this time for discussions.

“Ash beta we will begin with those strange dreams of yours. These dreams of yours are not merely dreams, rather they are reminders of your past births.”
Aishani was puzzled. She looked quizzically at her mother. Her mother nodded. Now Aishani was shocked. Amma knew! But what?
“Beta you come from a long line of warriors. You have been a warrior from the time of Ramayana and much before that also.”
“But baba I am yours and amma’s daughter. Warriors are Kshatriyas and we are Brahmins. How can I be a warrior?”

“Ash beta, now listen carefully. Of course, you are our daughter and born to your mother. But by nature, you are a Kshatriya. In every birth a set of parents are chosen for your soul so that you can do your work effectively without hindrances.” He looked at his wife. A message passed between them and he seemed satisfied.

“In this birth, it is our honour that you have been born to us and that we have to raise you with all the right values and awareness, and make you conscious of your past sanchit or amassed karmas which will be helpful in accelerating your education and training.” 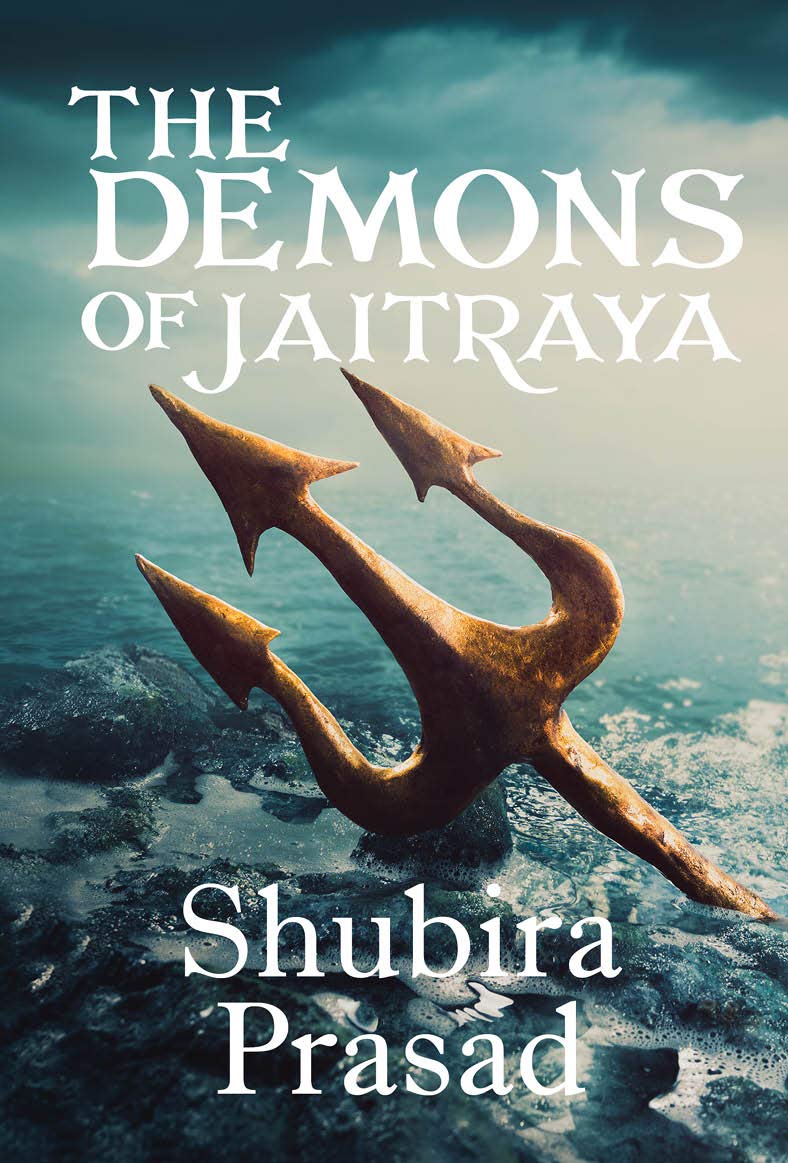 Excerpted with permission from The Demons of Jaitraya, Shubira Prasad, Vitasta Publishing. Read more about the book and buy it here.

Bidisha Banerjee on "Superhuman River: Stories of the Ganga": ‘I wanted to shift the narrative on Climate Change and its impacts by writing about a river that has fascinated both Indians and foreigners for millennia’
How Manohar Parrikar took root in Goa politics: An account of his swearing-in as Goa chief minister for the first time