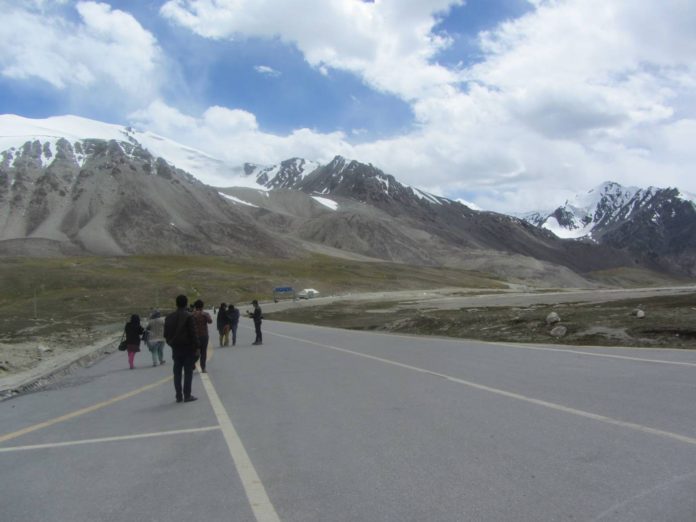 ISLAMABAD: For 20 years, Khunjerab National Park was a point of tension between Pakistan’s government – which established the park in 1975 as a sanctuary for rare species – and locals who had grazed their livestock on the land for generations.

As disputes over the land raged, poachers decimated Khunjerab’s wildlife, villagers say – until 1995, when local people and the authorities decided to work together to better protect the park.

“Our communities knew about natural resource management (and) we were well organised,” said Muzaffar ud Din, a founding member of the local Shimshal Nature Trust, which contributed members to a community-led management group set up to run the park.

“Now I would say Khunjerab is better managed than many other parks in the country. The local people look after it. The wildlife population has increased manifold,” he said.

In its latest move to generate jobs amid the COVID-19 pandemic while boosting conservation and curbing the impacts of climate change, Pakistan has announced the creation of Pakistan’s first National Parks Service, modeled on the U.S. agency.

Under it, the country aims to get more local communities involved in running national parks and earning an income as they protect nearby conservation areas.

The first phase of the Protected Areas Initiative, launched on July 2, will focus on 15 national parks that make up a total of 7,300 sq km (2,800 sq miles), spanning from Khunjerab in the north to the area around Astola Island in the south.

The project aims to create up to 5,000 new jobs, mainly for young people who will work as park guards and custodians, and boost eco-tourism in the country, authorities said when the initiative was announced.

“The dual objective is to protect nature while also generating jobs for unemployed youth,” he told the Thomson Reuters Foundation.

“All this green activity will aid in addressing the unexpected spike in COVID-linked unemployment across the country.”

Pakistan currently has about 30 national parks that are supposed to be protected and preserved by law.

But most are “paper parks” – areas classified as national parks but with little or no management, said Aslam, who helped design the new initiative.

Conservation expert Anis ur Rahman estimates only about 5% of the country’s parks are properly managed.

The others suffer from clashing priorities and a lack of cooperation between the government and the communities that live around them and rely on them for grazing, hunting and firewood, he explained.

“In many cases, the government changed the status of these old community-managed forest areas or grazing areas into national parks where (suddenly) everything is prohibited by law,” said Rahman, who heads the management board for Margalla Hills National Park, one of those included in the new project.

“But there is weak enforcement. The government does not have the resources to pay for adequate protection,” he said.

Many of the country’s environmental experts see Khunjerab, the country’s oldest and largest national park, as a model of successful community-led management.

The park was established 45 years ago as a way to protect the area’s glaciers, alpine pastures, streams and ravines.

Parts of it were closed off to create undisturbed habitat for animals from the rare Marco Polo sheep to snow leopards and Siberian ibex.

But that move pitted the government against local livestock farmers, who had long used the area.

Ashiq Ahmed Khan, a wildlife specialist working at the government’s Pakistan Forest Institute in the 1990s, helped draft the first management plan for the park that brought together locals and the provincial wildlife department.

Under the plan, eight villages inside the park agreed not to graze livestock in its 12-square-kilometre core zone.

In exchange, other grazing areas were designated on a rotation that gave each time to recover after being used, noted Khan, who is now retired.

Community members were employed as guards and game inspectors, with 80% of employment opportunities in the park going to locals. It was also agreed that local communities would receive 75% of the revenue generated by visitor fees.

“It really was the first national park in the country whose management plan was actually implemented,” Khan said.

Aslam, the climate change advisor, told the Thomson Reuters Foundation that the project will be overseen by Pakistan’s new National Parks Service, due to launch in September.

He said the country had earmarked 4 billion rupees ($24 million) for the initiative’s first phase over the next three years, of which at least 80% would be spent on creating green jobs and increasing community engagement.

Through the project, the amount of protected land in Pakistan will increase from 13% to 15% by 2023, Aslam added.

But environmental lawyer Rafay Ahmad Alam said that while the initiative is a positive step, it will do little to help preserve Pakistan’s green spaces without legislation to back it up.

The initiative “won’t make up for the fact that (most of) the provincial national park laws are weak and don’t provide adequate specifics for conservation, protection or enforcement measures,” he said.

Aslam agreed that proper provincial legislation is essential and noted that changes to policy are also part of the new plan.

The shift to community-managed parks offers the chance to tap into the “amazing indigenous knowledge” that local people possess about the land, Muzaffar ud Din said.

“Local communities have more information and they can manage their own natural resources better. They have better vision,” he said.

“National parks should not be viewed as a separate entity, but as part of the overall socio-economic and physical landscape. That is the future of conservation.”