My journey has been an adventure in two worlds: India, where I was born, and the US, where I emigrated at the age of twenty-two. In the US, I was able to experience an advanced society.
My happiest moment has been returning to India for good and making a difference in healthcare by building the HCG chain of oncology care centres, but at this juncture my story is not complete. As I reflect and look to the future, I am amazed at how much more one can do in a country like India—a country where 1 per cent of the population controls 85 per cent of the wealth. The political system is rife with populist ideas, where we seem to celebrate poverty rather than prosperity.

When I went to the US in 1975, a well-dressed cleaning lady came in a nice car and cleaned my apartment. Even after nearly forty-five years, we don’t have that in our country and don’t harbour any hope of seeing that in the near future either. We are informed of various subsidies and waiver schemes through prominent advertisements by the government; they tell us how the government is helping the poor by giving them free cooking gas and other free or subsidized commodities. When will we see ads that say the government helped the poor earn so that they could access these commodities at the right price? Isn’t this what would bring pride to our nation and make us an advanced country?

Once, at a talk, His Holiness the Dalai Lama said we should develop a generation of children that has confidence. I asked him a simple question: ‘How can children become confident when we tell them to take pride in being a member of the backward class and take benefits rather than work towards becoming a forward class and refuse benefits?’ Today, there is a great urban–rural divide in this country, a divide between the haves and the have-nots. There is considerable polarization. The religious card has been used heavily by the political system. There is a fundamental question about whether we are a secular country. People with dubious backgrounds are our elected representatives in many cases.
For centuries, we have been a tolerant society, maybe because of the theory of karma, where we are told to live with the consequences of our actions. When it comes to adverse consequences, it can instil a defeatist attitude in us. The concept of karma is being misused and misinterpreted, and hope dangled in front of the poor to exploit the lot of the have-nots. Corruption, nepotism and misuse of religion are eroding the very foundation of our democracy. Our laws, bureaucracy and systems are leftovers from the British rule. Even though the British left India seventy-two years ago, we still suffer from their legacy.

Today, in India, we need leaders with vision and boldness, not leaders with merely populist ideas. We should take pride in ourselves, our own capabilities as much as our rich heritage, instead of looking towards the West to lead us. The goal is to become an advanced country—and we certainly have rich resources, the most important being human talent. An ecosystem has to be created where we nurture these values and talents, and celebrate failures as well. There is a golden opportunity in health, education and skill development for us to leapfrog and become an advanced country.

* * *
Our work in healthcare, particularly in rural India, has led us on other paths as well. In 1988 I started an organization called International Human Development and Upliftment Academy (IHDUA) to see how we could improve the economic condition of women. The genesis of this idea was a project we did on downstaging cervical cancer. We conducted a house-to-house survey of 150,000 women, where we found that most of them were working an unbelievable eighteen hours a day. More poignantly, they were living a hand-to-mouth existence and eating only leftovers. Most of those in the reproductive age were anaemic. It was clear that we needed to improve their economic condition before they could focus on health.
As a pilot project under IHDUA, we started a women’s empowerment programme. It was based on the self-help group (SHG) model. Over the last decade, this initiative of ours has helped the SHG members to not only take large loans at low interest rates to develop businesses, but has also eliminated local lending at high interest rates. The per capita income of this segment has increased manifold. This has helped the local population considerably by increasing prosperity levels, and IHDUA can become a model for the development of Indian villages.
We have ventured into education. In 1994, we started a school in a remote rural area called Mullur near Mysuru, where I have been holding health camps for the past twenty-five years. The school had its genesis in the lack of basic amenities for the local population. Prominent locals told me that such health camps were fine but what they really wanted was education for their children. We immediately swung into action and I started a school in Mullur, an area that did not even have electricity at the time. The school, Vinayaka Gyanashaala, where we have now brought in computers, is thriving. The pass percentage for the school-leaving exam (SSlC) is almost 100. Students have gone on to become scientists, software engineers and other professionals. Thus the families can now afford quality healthcare.

Both these experiments, in livelihoods and education, have shown that proper investment in improving the prosperity and education of underprivileged sections can bring about more focus on health, both at the individual and the society levels. These aspects—economic condition, basic education and primary healthcare—are thus interrelated. They are the nub of the matter, the factors to focus on in order to bring prosperity to rural India and make India an advanced nation.

Looking ahead, I would like to concentrate on education and economic well-being, along with healthcare, expanding our think tank ‘Antardhwani’ to becoming a public-policy-inclusive institute. I look at this as the next phase of my life, after my achievements as an entrepreneur in healthcare and guiding HCG to serve society. Today, India needs activism and accountability. We have a rich heritage and are capable of being an advanced country, if we hold governments accountable and become responsible citizens of society. I intend to actively grow into this new disruptive avatar of entrepreneurship. It’s a new chapter in my life—one that promises much in terms of what can be achieved for society at large. 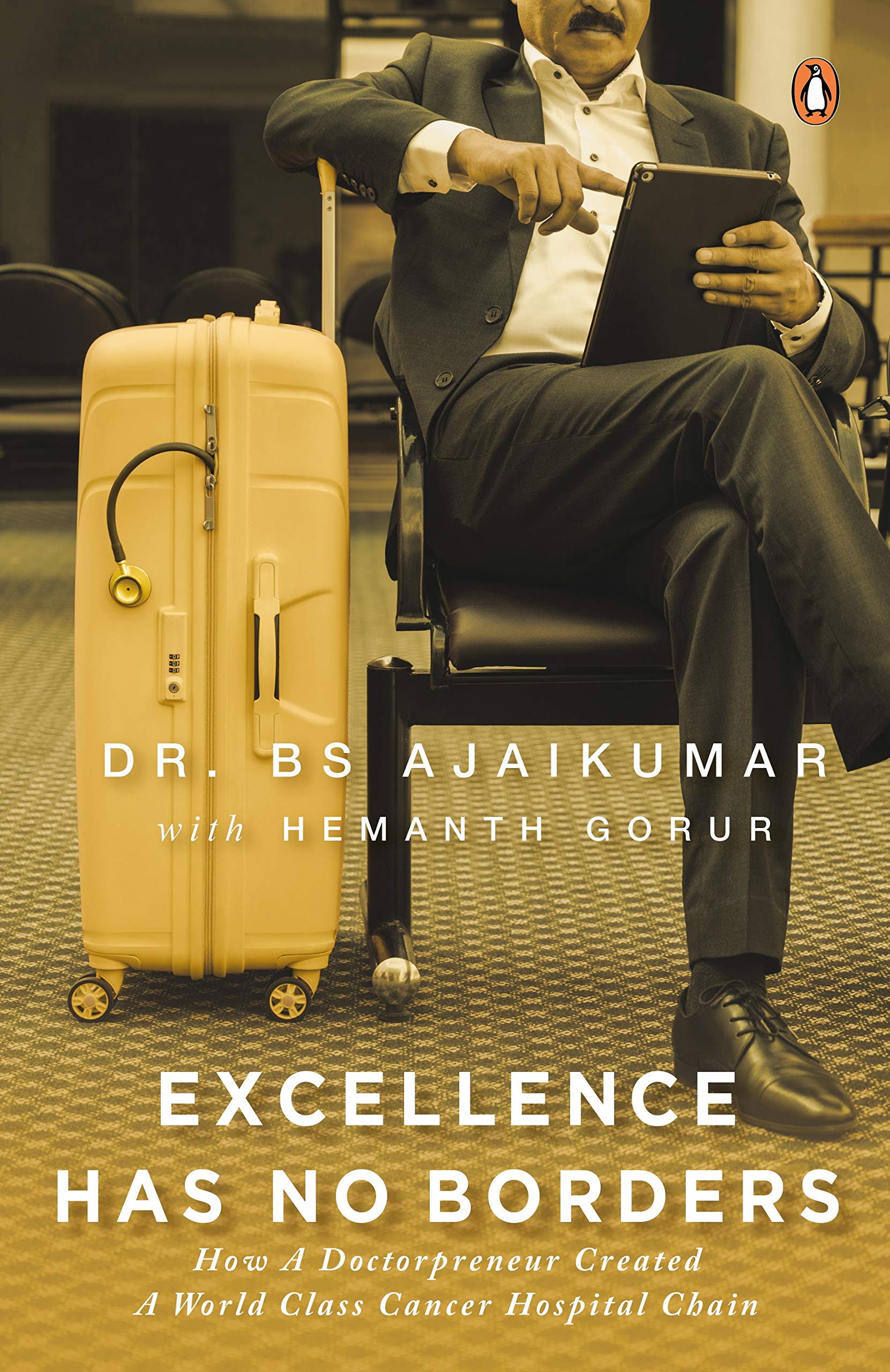 Excerpted with permission from Excellence Has No Borders: How A Doctorpreneur Created A World-Class Cancer Hospital Chain, Dr. BS Ajaikumar with Hemanth Gorur, Penguin India. Read more about the book here and buy it here.

In this novel, Perveen Mistry, the only female lawyer in 1920s Bombay, investigates a case of palace intrigue
Set towards the end of 2020s, Samit Basu’s book “Chosen Spirits” is a speculative fiction in which the protagonist is a Reality Controller