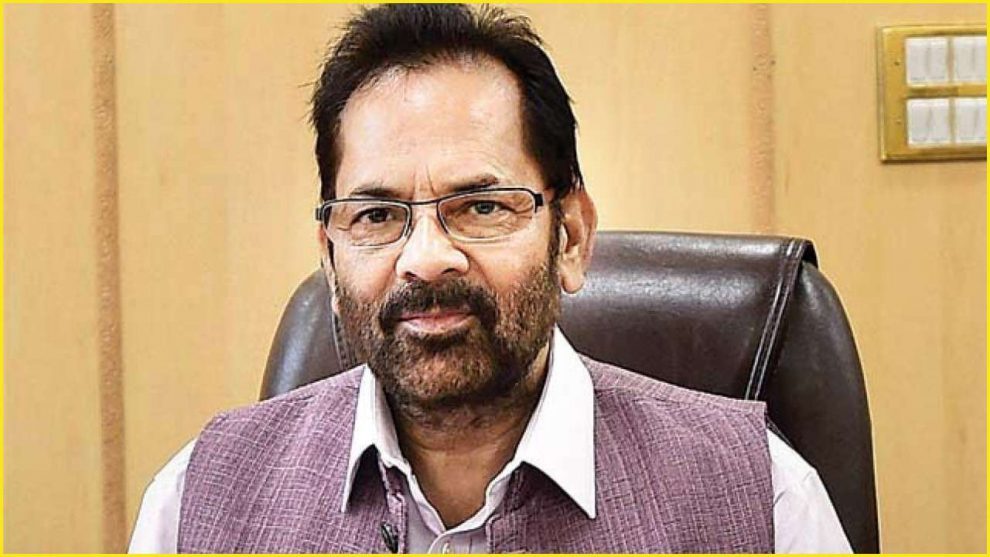 Says dynasty politicians plundered J&K resources for last 70 years, will have to pay back

Srinagar, Nov 20: Union Minister for Minority Affairs, Mukhtar Abbas Naqvi Friday said that the “Gupkar Declaration” will prove to be a “Death Declaration for Destructive and Dynasty Politics” in Jammu and Kashmir and people will teach them a lesson in the forthcoming DDC elections.

According to the news agency—Kashmir News Observer (KNO), the union minister said that the motive behind conducting DDC elections is that there should be people’s participation in the political process, however, some leaders were trying to mislead common people and were becoming a hurdle in the political and democratic process.

He said that these leaders have earlier decided not to contest the elections but when they saw the common people taking part in these elections they came up with the alliance called “Gupkar Declaration” which will prove to be a “Death Declaration for Dynasty and Destructive Politics” in Jammu and Kashmir.

“For how long this dynasty ego will run, one day it will have to crumble and people will make this dynasty ego crumble. This ‘Khandani Garoor and Pandani Suroor’ will not last long,” he said.

Mukhtar Abbas Naqvi was addressing a convention of Bharatiya Janata Party workers in Balhama area in the outskirts of Jammu and Kashmir.

He said that for the last 70 years, the funds which had been coming to Jammu and Kashmir for development have been looted by these dynasty leaders. “Even if only half of those funds would have been utilized for the development here, the roads would have been made of silver and gold in Jammu and Kashmir but these leaders built bungalows for themselves in every nook and corner of the world.”

He said that they will have to pay back every penny they have looted over the past 70 years even if they make many more alliances’ like this. He also said that the motive of conducting DDC elections in Jammu and Kashmir is that every citizen of the UT will take part in the political process.

“There was no need to conduct elections after the abrogation of Article 370 but it was decided to conduct these elections with the sole motive of people’s participation in the political process in Jammu and Kashmir.”

Talking to the reporters on the sidelines of the function, he said that when people will participate in the political process in Jammu and Kashmir that will be a guarantee for the development, progress and prosperity of the people of Jammu and Kashmir.

“Those who were trying to become a hurdle in taking part in the political and democratic process, their motives are being crumbled and those who have looted Jammu and Kashmir will have to pay back every penny.” He also said that this alliance is not for elections, they have come up with the alliance only to save themselves because they know they have done wrong and they will have to pay for their wrongdoings