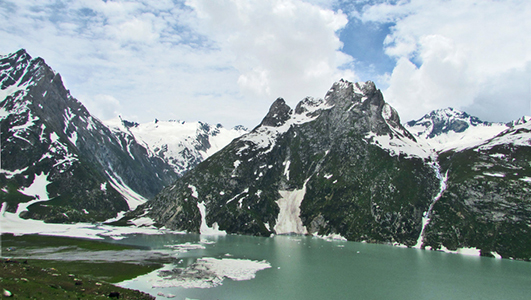 Dhurjati Mukherjee
Add Comment
It is understood that the acceleration in the rate of ice loss has only emerged within the last few decades and coincides with human-induced climate change. This study has only reinforced what climate scientists have for over two decades been monitoring Himalayan glaciers and documenting varying rates of ice loss along the 2400 km long mountain chain.

In a recent study by the University of Leeds in the UK, it found that the Himalayan glaciers are shrinking far more rapidly than glaciers in the world and have already lost ice equivalent to that in the Central European Alps, the Caucasus and Scandinavia combined. Scientists estimated that Himalayan glaciers have lost around 40 percent of their area – shrinking from over 28,000 sq. km between the 13th and 19th centuries to around 19,600 sq. km at present.

It is understood that the acceleration in the rate of ice loss has only emerged within the last few decades and coincides with human-induced climate change. This study has only reinforced what climate scientists have for over two decades been monitoring Himalayan glaciers and documenting varying rates of ice loss along the 2400 km long mountain chain.

The researchers also found that the Himalayas lost between 390 cubic km to 586 cubic km of ice, the equivalent of all ice contained in the Central European Alps, the Caucasus and Scandinavia. The ice loss raised sea level across the world by 0.92 mm to 1.38 mm, the scientists calculated in their study, published in the journal, Scientific Reports.

To estimate the contribution of melting ice, researchers have turned to NASA’s twin Gravity Recovery and Climate Experiment (GRACE) satellites. These satellites help measure how the mass of ice sheets or glaciers is changing on Earth by studying how the force of gravity varies over Earth. “GRACE provides not only how much total mass is being added to the ocean, it also tells you at which parts it is being added to, which parts of Antarctica, which parts of Greenland or Alaska,” according to the Centre for Space Research at the University of Texas at Austin. “An oceanographer can then decide whether the entire addition of mass will make the sea level rise uniformly or if it will make it rise non-uniformly in different parts of the oceans.”

In India, the glaciers feed large rivers like Brahmaputra, the Ganges and the Indus and scientists cautioned in the past that the rapid ice loss would initially increase, but eventually reduce water flow. It is significant here to mention that earlier studies found glacial loss in the Himalayas but the loss is faster along the eastern segments, including regions of east Nepal and Bhutan.

India encompasses three million sq km with diverse agro-climatic regions from arid areas in the North West like the Thar desert to Ladakh’s cold desert to areas with very high rainfall in North-East India and parts of Western Ghats. Scholars point to two significant shifts in climate patterns. One is the distribution of precipitation that falls upon an area in a year. The other change is the onset and duration of winter in areas which have a cold season. However, in much of North India, if the cold season ends earlier and the hot season ends sooner, the entire pattern of sowing and harvesting crops will change.

Experts believe thatsea levels are rising faster than previously thought. The four Indian cities – Kolkata, Mumbai, Surat and Chennai – are projected to be affected by a one metre sea level rise in 2100, while several others in North India are expectedto face a severe water crisis. The four Indian cities are among 45 such coastal port cities globally, where even an increase of sea level by 50 cm will lead to flooding and affect a total of 15 crore people. In fact, the extreme sea level events that used to happen once a century will occur every year by mid-century in many regions, increasing risks for many low-lying coastal cities and small islands.

India’s more than 7,500 sq km of coastline are at high risk for impacts of climate change related to sea-level rise. Sea levels along the Indian coast have risen by 8.5 cm during the past 50 years, and scientific prediction suggests that 36 million Indians are likely to be living in areas experiencing chronic flooding by 2100.

Another prediction estimated that sea levels along the Indian coast are projected to rise varyingly by around one to 2.8 feet by the end of the century due to global warming, posing a potent threat to vast stretches of the western coastline, including Mumbai, as well as to major deltas in east India, according to government sources. Sharing studies by Hyderabad-based Indian National Centre for Ocean Information Services, the government told Lok Sabha way back in December 2018 that Mumbai and other west coast stretches such as Khambat and Kutch in Gujarat, parts of Konkan and south Kerala were most vulnerable to sea level rise.

Threats posed by sea level rise have direct implications for India’s food security as hundreds of millions are dependent on river water systems that could be adversely impacted by inundation. The studies on sea level rise also projected a sharp increase in population at risk from flooding due to more frequent severe weather events.

The one metre rise was assuming a ‘business-as-usual’ scenario and it would affect a total of 140 crore people around the world, unless emissions of greenhouse gases are drastically cut, as per a 2019 report on ‘Ocean and Cryosphere’ released in Monaco by the IPCC. The sea level globally would rise by around 30cm-60cm by the end of the century even if emissions of GHG are sharply reduced and global warming limited to 20C. It will rise by around 60cm-110cm if GHG emissions continue to increase strongly.

In a country like India where population density is high and a huge number of people reside in coastal areas, the rise in sea level will obviously result in flooding and affect lakhs of people. Already floods are a source of huge concern and in certain States, floods cause immense loss of property and human lives, affecting mainly the poorer sections of society.

According to the Internal Displacement Monitoring Centre, about 3.6 million Indians were displaced annually between 2008 and 2018, most as a result of flooding from monsoon rains that are the heaviest in South Asia in absolute terms. The loss in terms of GDP runs into thousands of crores in India and the government has little to do in the matter, except issuing advance warning and giving some subsidies to the affected.

A regular occurrence like floods and cyclones has been a critical problem in states like West Bengal, Odisha and Maharashtra. Sea level rise has been continuing for decades and studies indicate that many islands have already been washed away. Already three Sundarbans islands have completely disappeared and several others, including tiger habitats, have shrunk. Future projections point to many more islands disappearing under the sea in the coming years.

With increasing impacts of climate change, countless more people may migrate or be displaced from high-risk areas along the Indian coast. Without concrete climate and development action, many families could be forced to move within their own State or further afield to escape the impacts of sea rise and coastal inundation. Finally, there is enough evidence at global and regional levels demonstrating that climate change and consequent sea level rise could potentially displace massive numbers of people if proactive actions are not taken.