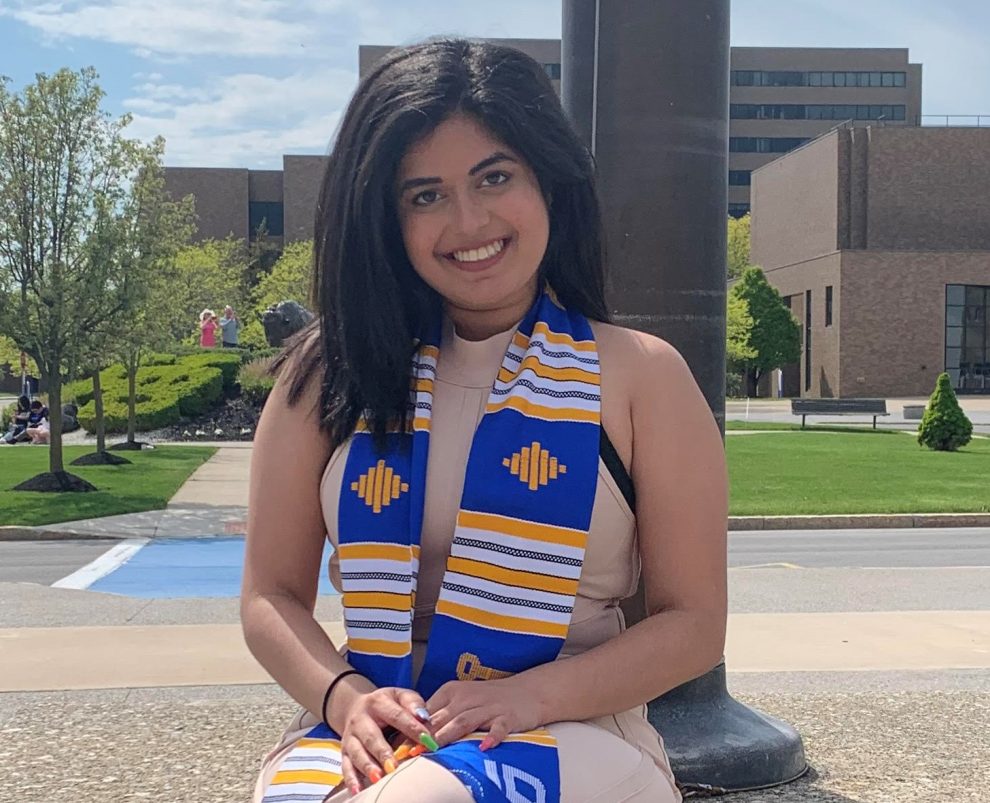 As soon as he sat next to me, I could not help myself. I do not know what suddenly happened, and I started sobbing my eyes out. I tried to control myself but after a while I didn’t even try to resist the urge and gave in. I could see there were people around me starting to notice it and get uncomfortable. But I guess that was a consequence I had to deal with later. It wasn’t like this was the first time I had embarrassed myself in public. Professor Alias did not say anything, he just sat there with my head on his sturdy shoulder, with his arms around me, covering me like a blanket of comfort, as if he were my guardian angel. I didn’t know what time it was, and I didn’t want to move to check it. The sun was setting so it was probably around sevenish in the evening. I was comfortable in his arms but I was also very embarrassed since he had never seen me cry, let alone me howling like a baby!

A while had passed before professor Alias turned to me and asked if I wanted to go to his office. He did not say what we would do when we get there but I knew he wanted to chat about my little outburst. I could see my teary face in his beautiful eyes, I wanted to just stay there and look into his deep eyes, but I said yes! His office was not very far away from the lake. I am pretty sure, he saw me sitting at the edge of the lake from the big window in his office which made him pay me a visit. Honestly, there would not have been a better person I would have shared these pasts few moments, or hours with. I did not realize when we got to his office, I was lost in my own thoughts. Professor Alias did not disrupt my thoughts until I heard his keys jingle, when he was trying to open the door to his office. My eyes went to his key chain, a pair I had gifted him when I came back from my internship in New York last fall. I had never noticed it before, or probably I never happened to come across his keys.

There was definitely a feeling, it was hard to define it or name it for that matter but it was there and I felt even more comfortable stepping into the office. I sat on the couch right by this huge shelf, with stacks of books arranged so neatly, alphabetically on it. There was not even a speck of dirt on them, they were very well maintained and used very often. In the opposite corner of the room, professor Alias was fiddling with a box of cookies while I could smell coffee on the boil in a Keurig machine. The smell of coffee always assuaged me; it was like food for my soul.

It took me a while to notice, but the graffiti wall, the one with the same historical events but different rules, was missing. The wall was painted in beige again, it was smooth like a porcelain paper. There was no graffiti and the room had gone back to its original mundanity. I did not know why it was painted, but I wondered if the university got to know about it and painted it during spring break. Within five minutes, professor Alias walked towards the couch with two coffee mugs and some cookies. I couldn’t look up and see his face, I still felt embarrassed for what happened at the lake. When suddenly my eyes ran across the room to his desk, I saw this very thick but small book, black in color lying on the desk, semi closed, as if the wind from the window had deliberately closed it. I ran towards the desk, and for a second I felt everything will be okay. I mean the description matched exactly what Mr. Journal looked like, but as soon as I got a hold of the book, I realized it was not mine. It had no name on it, no glitter, nothing and I was hopeless again. It was like the entire world was laughing at me and the destiny tried to take a shot as well, saying ‘Why Not’ right!’

All this happened so quickly, I did not have to analyze anything and there it was, I started balling again. I started whispering, “I lost it. How could I…what have I done?”

I just stood there muttering when professor Alias reached out for me. He was holding me again.

He didn’t say anything, he was just there and I kept crying. To think about it, I can’t imagine what was going through his mind. Was he judging me for crying over a journal. Well he didn’t know what I was crying about and I have no clue about what he was thinking, but he definitely didn’t make me feel uncomfortable and I respected him for that. I tried to control myself, to stop myself from crying like a child but I just could not help it. Mr. Journal was the closest thing I had to prove that I was a writer, or at least I tried to be. It was the only proof of my identity, or at least that is what I thought in the moment, when suddenly, my eyes ran up to his face. Until now, I was staring at the floor. We were so close, close enough that I could feel his breath, I could also smell it. It smelled like coffee and cookies. We were so close that I couldn’t stop myself, and I moved my head forward, and I kissed him. It was a more mellow kiss, with my lips touching his lips but not enough. He suddenly resisted a little, pulled his head back probably a few inches away. We shared an eye contact, and we were kissing again. This time it was more passionate, with his lips pressed to my lips; I could feel his cheeks, I could feel my own tears. I was still crying, but we did not stop kissing. My hands ran through his hair, it was long and curly, when his hands moved from the back of my head to my shoulders, down to my back. It was wet and teary but it was ravishing. I could taste the coffee and I didn’t want it to stop until we pulled away from each other and there was nothing else to say.

Excerpted with permission from Imaginations Wild, Parinieta Ahuja, Petals Publishers. Read more about the book and buy it here.

Join The Dispatch Whatsapp Group to stay updated
The Dispatch is present across a number of social media platforms. Subscribe to our YouTube channel for exciting videos; join us on Facebook, Intagram and Twitter for quick updates and discussions. We are also available on the Telegram. Follow us on Pinterest for thousands of pictures and graphics. We care to respond to text messages on WhatsApp at 8082480136 [No calls accepted]. To contribute an article or pitch a story idea, write to us at [email protected] |Click to know more about The Dispatch, our standards and policies
TagsContemporary Fiction Imaginations Wild Parinieta Ahuja Petals Publishers