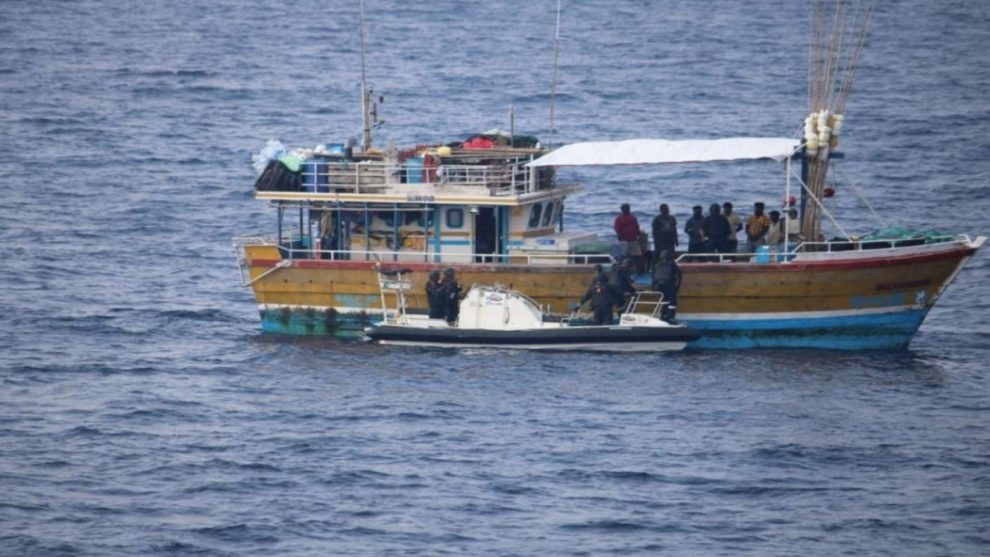 According to a defence press release, intelligence received a tip-off on March 15 regarding a suspicious boat of foreign origin likely to engage in drug trafficking in the Arabian Sea. Upon receiving the input, a swift air-sea coordinated operation by the Indian Coast Guard was launched to detect the suspicious boats.

On rummaging of boats, 300 kgs  of high grade Heroin and five AK-47 rifles with 1000 live rounds were recovered from Sri Lankan fishing boat Ravihansi. The estimated value of narcotics in the international market is approx Rs 3000 crore.

This is the second major anti-drug trafficking operation undertaken by ICG on the west coast of India within a fortnight. On Mar 5, ICG ships and aircraft, in a coordinated operation in Lakshadweep seas, had successfully apprehended Sri Lankan boat Akarsha Duwa with 6 crew off Minicoy island.

The past year has proved to be a big setback for drug traffickers at sea as ICG has successfully seized about 1.6 tons of narcotics worth approx Rs 4900 Cr. The total drug haul done by ICG since inception amounts to Rs. 10,952 Cr.

The back to back successful anti-narcotics operations are a testimony of a smooth and cohesive flow of information with various Government agencies and ICG. This set up has resulted in robust detection and response mechanism coupled with the unwavering commitment of ICG which has kept at bay the nefarious designs of anti-national elements of exploiting our maritime zones for malicious intent.