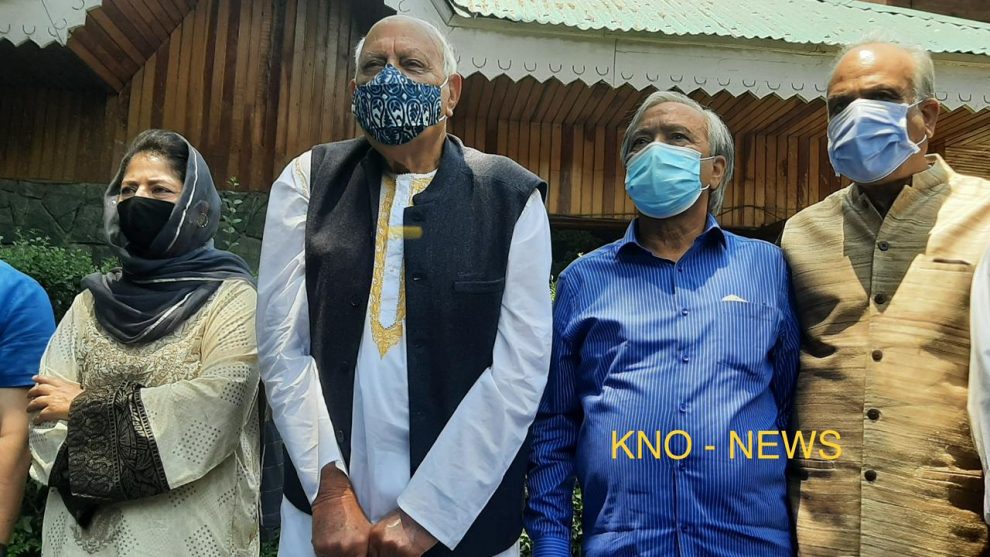 Our stand clear, known to everyone, all those invited will attend meet: Dr Farooq; Will represent people’s aspirations, seek what is ours and what will remain ours, says Tarigami

SRINAGAR: In a significant political development, Peoples Alliance for Gupkar Declaration (PAGD) Tuesday said that they have accepted Prime Minister Narendra Modi’s invitation for a meeting on June 24 in New Delhi and that they will represent the people of Jammu and Kashmir including Ladakh in the session. The PAGD leaders said that they will pitch hard for restoration of “what was ours and what can remain ours” hinting that they will seek rollback of the August 5, 2019 announcement.

Addressing a joint press conference after a marathon meeting at National Conference president Dr Farooq Abdullah’s Gupkar residence, the PAGD leaders said that they will also seek release of political prisoners and shifting of inmates from various Indian prisons to J&K jails.

It may be recalled that PAGD leaders met under the chairmanship of Dr Farooq at his residence at 11 am today. Talking to reporters as per news agency—Kashmir News Observer (KNO), Dr Farooq, who heads the PAGD said: “Our stand is clear and all of you know what our stand is.  Since New Delhi has invited leaders’ individually, we have decided that all those invited will attend the meeting and put forth their points on J&K.”

Dr Farooq said that there is no fixed agenda for the meeting. “We can talk on any and every issue in the meeting,” he said. Speaking on the occasion, M Y Tarigami said that they will not ask for stars from the sky in the PM’s meeting on June 24. “We will seek something that is ours and will remain ours,” he said, hinting that they will seek restoration of Article 370 and Article 35 A.

Chipping in, PDP chief Mehbooba said that earlier there was a suggestion that only Dr Farooq would represent PAGD in the June 24 meeting but now there is a consensus that all those who have been invited will go. “We are not against dialogue.

My late father Mufti Muhammad Sayeed has always advocated dialogue for resolution of issues. I believe New Delhi should have released all political prisoners for creating an atmosphere for talks but it didn’t,” she said. “Now we will demand the release of political prisoners as there are many who are ill in jails. We will also seek immediate shifting of prisoners back to J&K jails from various Indian prisons.” Echoing similar views, Tarigami said that prisoners like Shabir Ahmed Shah are very ill in prisons and that the release of inmates is highly inevitable now.

Awami National Conference vice-president Muzaffar Shah while speaking on the occasion said: “There will be no compromise on Article 370 and Article 35 A.”—(KNO)