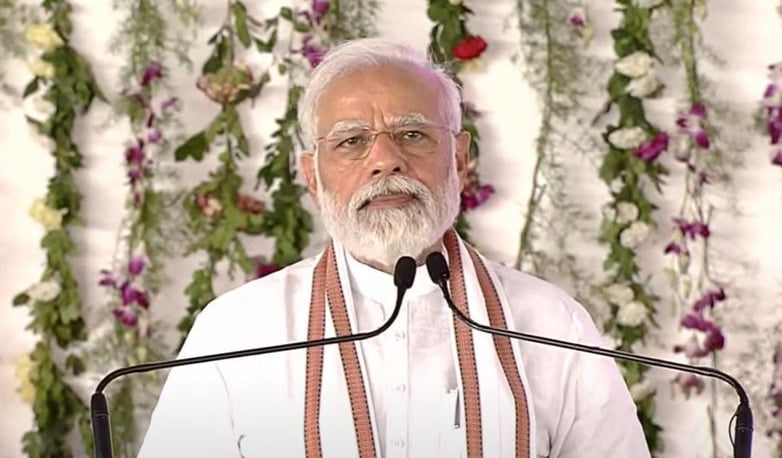 SAMBA: Prime Minister Narendra Modi Sunday said reached out to youth of J&K stating he promises that the youth of the UT won’t suffer the way their parents and grandparents suffered in the past.

“I assure, rather promise that youth of J&K won’t see hardships and sufferings seen by their parents and grandparents,” PM Modi thundered from the stage at Pali Panchayat block in Samba district of Jammu region.

He said neither the place for new for him nor was he new for people. “Today, Rs 20,000 Crore worth projects related to connectivity and electricity have been inaugurated. Local youth of this place will get jobs,” he said.

He said Jan Aushudi cards will help poor people get medicines at cheaper rates. “Today, is yet another beginning of J&K’s march towards development,” PM Modi said. He said that Pali Panchayat village will be the first Carbon-neutral Panchyat of the J&K.

He said that in the past 10 days, villagers have been providing free food to guests coming to attend the rally. “I salute all the villagers of Pali for their commitment,” Modi said, adding that “celebrating Panchayati Raj Diwas in J&K is a significant development. It is evident that democracy has reached to the grassroots level in J&K and I am addressing all panchayats of India from this place.”

In J&K, there are more than 30,000 panchayati representatives who are running governance related affairs. “For the first time, peaceful three-tier Panchayati elections were held,” he said. “Past two years, have seen huge development in J&K. Almost 200 new laws were extended to J&K and empowered people of this place.”

The most benefit reached out to Dalits, women, children and downtrodden of J&K. “I feel proud, today after 75 years,  Walmiki Samaj people are equal to any other citizen of India. These people suffered a lot,” the PM said. “These people got freedom after 75 years of India’s independence.”

He said LPG gas connection, Sawach Bharat scheme or any other Central scheme, J&K is on the forefront. “I also met a Gulf delegation. They are quite enthusiastic about J&K. Post 1947, just Rs 17000 outside investment reached J&K. But in just the past two years, Rs 38000 cr investment proposals stand cleared for the J&K,” the PM Modi said, adding that while corruption is being crushed by the clean administration which has raised the confidence of investors. This year, for preservation of lakes, huge funds were earmarked.

He said that he feels happy after e-inaugurating Rattle power project. “Power sector is having huge potential to take J&K to new heights,” PM Modi said. He said every panchayat will be strengthened further. The PM Modi said that government led by him is committed to provide clean and safe drinking water to every household in the years ahead—(KNO)