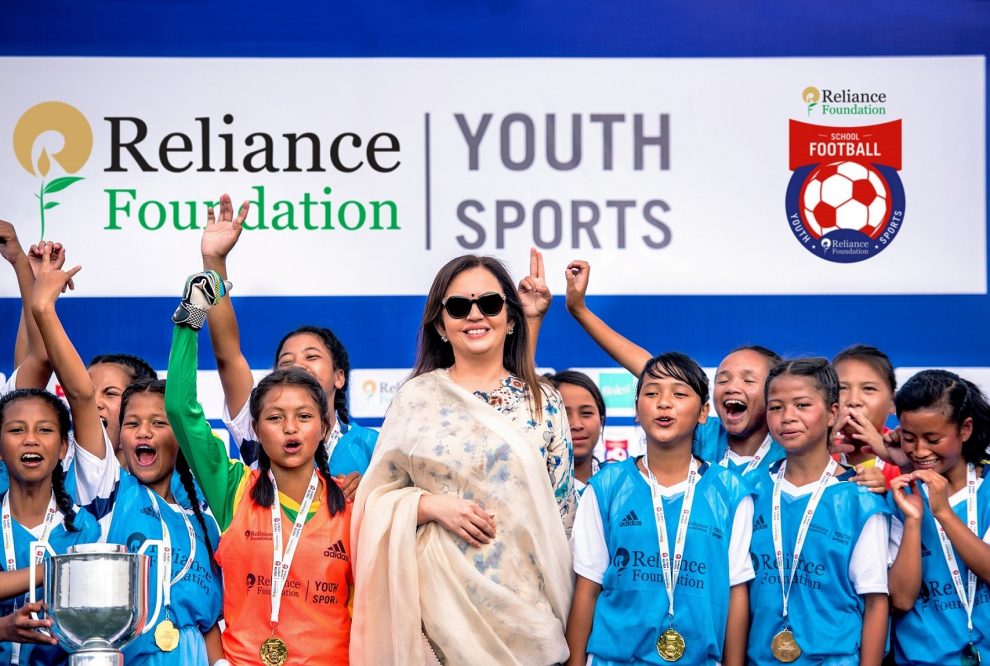 Mumbai, May 24: IOC Member, Mrs Nita Ambani lauded the launch of India’s first ‘Olympic Values Education Programme’ (OVEP) by the International Olympic Committee (IOC) today in Odisha, emphasising that OVEP combines the twin powers of education and sport in instilling the core values of Olympism. The OVEP is a practical set of resources designed by the IOC to introduce young people to the Olympic values of excellence, respect and friendship. The programme aims to disseminate this values-based curriculum to help children become active, healthy and responsible citizens. A landmark initiative in India’s Olympic movement, the launch of OVEP comes as a build-up to the prestigious IOC 2023 Session.

Earlier this year, Mrs Ambani led a delegation for India’s bid to host the IOC Session in 2023, where India was near unanimously awarded the rights after a gap of 40 years. The IOC Session in India marks a new era in Indian sports history, giving a boost to India’s ultimate Olympic aspirations with a sports ecosystem in the country which would encourage and empower the youth to hone their skills and bring global laurels. Mrs Ambani is part of multiple Olympic Movement commissions and OVEP which falls under Olympic Education is especially close to her heart as it helps inculcate core Olympic values in children.

“India is a land of great opportunities and infinite possibilities,” said IOC member Nita Ambani. “We have over 250 million children in our schools, brimming with talent and potential. They are the champions of tomorrow, the future of our nation. Only a small number of children in the world may become Olympians, but every child can be touched by the ideals of Olympism. That is the mission of OVEP, and that is what makes it a huge opportunity for India. As we prepare to host the IOC Session 2023 in Mumbai next year, I look forward to further strengthening the Olympic Movement in our country.”

The OVEP was officially launched by the Hon’ble Chief Minister of Odisha Naveen Patnaik, IOC Member Mrs. Nita Ambani, IOC Education Commission Chair Mikaela Cojuangco Jaworski, Olympian and member of the IOC Athletes’ Commission Abhinav Bindra and President of the Indian Olympic Association (IOA) Narinder Batra. OVEP will be integrated into the school education system of Odisha. The programme is being developed in partnership with the Department of School & Mass Education, the Government of Odisha and the Abhinav Bindra Foundation Trust.

Mrs. Ambani further thanked the Odisha Government for their continued support towards India’s Olympic dream and grassroot development. She said, “Under the visionary leadership of Shri Patnaik ji, through increased investments and dedicated efforts, Odisha has become a hub of India’s sporting ambitions. The state is actively creating a holistic ecosystem for sport, which provides top quality training and infrastructure to our young athletes.”

Notably, Reliance Foundation works closely with the Odisha Government for the Odisha Reliance Foundation Athletics High-Performance Center (HPC). Two Reliance Foundation athletes from the HPC – Jyothi Yarraji and Amlan Borgohain, broke national records and bagged medals at international athletic events over the past month. Jyothi, has been on a phenomenal run, initially breaking a 19-year old national record and then bettering her own record in the subsequent event. With this feat, Jyothi has earned the AFI qualification time for the Commonwealth Games, highlighting that the future of Indian sports is in safe hands.

About the OVEP-Odisha program: The OVEP-based projects and activities help address the global challenges of sedentary lifestyles, lack of concentration, and adolescents dropping out of school. The resources and toolkits are designed to make it possible for young people to enjoy and learn from physical activity and gain lifelong social, cognitive and physical skills. In its first year, the programme aims to impact 32,000 children enrolled in 90 schools in the cities of Bhubaneswar and Rourkela and, once in full swing, it will reach around 7 million children. The state of Odisha intends to take OVEP to all its schools and higher education institutions in a phased manner, thereby enabling its young population to truly take on board the Olympic values.

The Olympic Foundation for Culture and Heritage (olympics.com), which leads the OVEP programme for the IOC, will conduct training sessions for “master trainers” nominated by the state of Odisha, along with trainers from the ABFT, who will in turn kick-start the programme with focus groups of eight to ten schools in the state. Orientation sessions will be held for school principals, education and sports officials, and other core group members involved in the project.

Olympic Values Education Programme:  The Olympic Values Education Programme is a series of free and accessible teaching resources created by the IOC, to complement academic curricula using the context of Olympic sports and the core principles of Olympism. Participants are encouraged to experience values-based learning and to assume the responsibilities of good citizenship. OVEP communicates the long-term benefits of sport and physical activity through an understanding of Olympism and its impact on individual health, enjoyment, and social interaction. https://olympics.com/ioc/education/olympic-values-education-programme