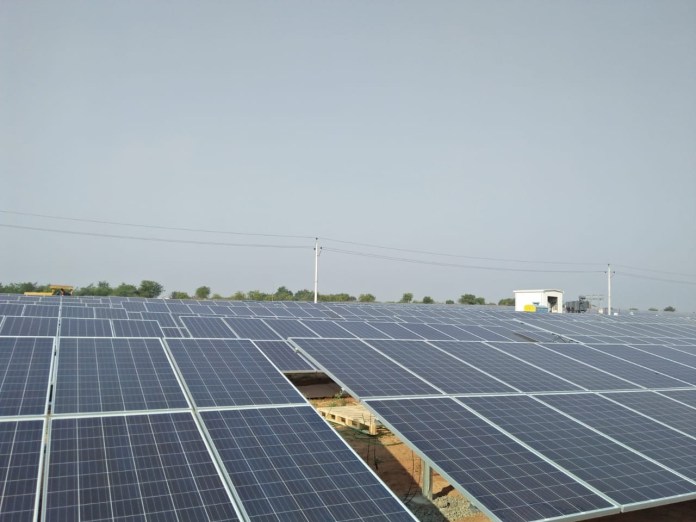 Over 30 thousand solar panels, covering 45 acres, have been installed to generate 10 MW of power. GHIAL would be able to cut power dependency by 12 million units per year with this extra capacity, saving roughly Rs 90 lakh each month. It has the capacity to meet 50% of Hyderabad Airport’s energy requirements.

In addition, with the power plant, GHIAL would be able to reduce its reliance on Telangana State Electricity Board by 12 million units per year, saving around Rs 90 lakhs per month.

With the solar power generation, the Hyderabad Airport’s energy needs will be covered up to 50%. There will be a decrease in carbon footprint of approximately 28 lakh kg carbon dioxide (CO2), which is the equivalent of conserving 1.4 lakh full-grown trees.

India recognised the importance of climate change and the need for a green economy, and has stringently improvised policies on renewable energy and electric vehicles (EVs).

The path to a green India starts with carbon neutrality and renewable energy development simultaneously. So, recently, Prime Minister Narendra Modi has set a target of generating 450 gigawatts of renewable energy by the year 2030 which is five times more that the current capacity and two and half times the Paris pledge.

Today, India’s renewable power capacity is the fourth largest in the world, and also the country is moving forward for a 30 to 35 % reduction in its carbon footprint.

In 2010, the National Solar Mission (NSM) was launched. The major goal was to position India as a global leader in solar energy by establishing policy conditions that would allow solar technology to spread as soon as possible across the country. Solar energy has taken a major place in India’s National Action Plan on climate change with the National Solar Mission as one of the key Missions.

It aims to build 100 GW of grid-connected solar power plants by the year 2022. This is in accordance with India’s Intended Nationally Determined Contributions (INDCs) objective of 40 % cumulative electric power installed capacity from non-fossil fuel based energy resources by 2030, and a reduction of 33 to 35 % in the emission intensity of its GDP from 2005 levels.

By the end of 2021-22, the Government has set a target for installing 175 GW of renewable energy capacity (excluding large hydro) with 100 GW coming from solar, 60 GW from wind, 10 GW from biomass and 5 GW from small hydro.