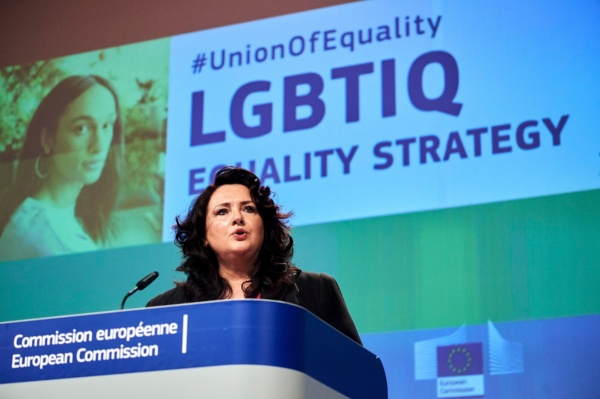 LONDON: Europe’s equality chief said on Thursday she was saddened by Hungary’s ban on transgender people changing their legal sex as Brussels launched a strategy to tackle discrimination against LGBT+ people.

“It’s very sad for me to see this kind of legislation,” EU Commissioner for Equality Helena Dalli told the Thomson Reuters Foundation of the ban put in place earlier this year, which highlighted a shift towards anti-LGBT+ policies in Hungary and fellow EU-member Poland.

Dalli declined, however, to criticise a Hungarian proposal to effectively ban same-sex adoption and amend the constitution to require children’s upbringing to be based on “Christian culture”, noting that family law was the responsibility of EU member states.

When asked what she thought about Hungary’s government saying children should only be raised by a married mother and father, Dalli said it was: “(not) a good example of how we should speak about families.”

EU leaders have become more strident in support of LGBT+ rights, clashing with nationalist governments in Poland and Hungary, which have tried to shore up their support by targeting gay and transgender people.

Under its new strategy, the EU Commission, the bloc’s executive branch, will propose a law by 2022 to ensure that same-sex parents are recognised as such when crossing borders with their children.

Next year it will propose making anti-LGBT+ hate crime a “Eurocrime”, alongside offences such as terrorism and human trafficking for which the EU sets minimum rules that member states have to follow.

Both proposals would require a unanimous vote from member states, which Dalli acknowledged was far from guaranteed.

In July, the EU withheld funding from a town-twinning scheme from six Polish towns that had passed resolutions against “LGBT ideology”.

“It was a very strong message that this is not the European way of life,” said Dalli, who backed laws legalising same-sex marriage and allowing trans people to legally change gender without a medical diagnosis when she was a minister in Malta.

Dalli also condemned so-called “conversion therapy”, which aims to make gay people straight and which was banned in Malta while she was a minister.

“It’s one of the most horrible practices that has ever existed,” she said. “(It) is a joke, it doesn’t work, it’s not true.”