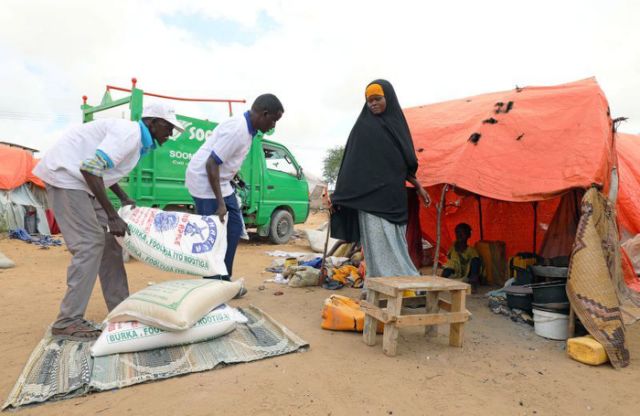 MOGADISHU: Muslima Abdirahman, a Somali mother of nine, escaped death twice in the past two years while shopping for groceries in Mogadishu, where Islamist insurgents regularly carry out suicide bombings on busy streets and markets.

She shudders at the memories: “I wiped my tears with my veil and went home on foot without buying anything.”

But earlier this year Abdirahman traded her dangerous errands for online shopping, thanks to the World Food Programme’s “humanitarian e-commerce” system in Somalia — part of its global shift from distributing food to handing out cash.

Conceived as a way to protect women in Somalia from security threats — be it bombings in the capital city or harassment in a camp — it is also now helping to prevent large crowds gathering at aid distribution sites during the COVID-19 pandemic.

Abdirahman compares the prices of products such as cooking oil and salt offered by retailers on an app called e-Shop created by WFP, spending the monthly $60 stipend she receives from the agency as she sees fit. This frees up time for working as a cleaner and for childcare, she said.

Her neighbour Ilhan Adow, who also uses the WFP app, says she uses the hours she saves to breastfeed her children, do chores and rest.

WFP launched e-Shop in 2018 but only introduced home delivery in April this year, a month after COVID-19 reached Somalia. WFP sped up implementation of this option so that needy families could reduce their potential exposure to the virus, said Cesar Arroyo, head of WFP in the country.

Years of conflict, and the threat of al Qaeda-linked Islamists battling to overthrow the government, leave many Somalis dependent on aid.

But e-Shop has changed the dynamic, said Arroyo.

“Years ago, when we were handing out food, people accepted it but you could see in their body language how the dignity wasn’t there,” he said. “Now… they are the ones deciding where and what to buy.”

Hundreds of retailers sell on the app. Transactions are recorded to comply with the government tax system. Purchases are verified on delivery using biometrics.

Six million dollars in transactions, and more than 51,000 deliveries, have gone through the system.

It operates in Mogadishu, including in camps for people forced from their homes by violence, and in all Somalia’s main towns.

WFP has long used electronic vouchers for distributing cash aid for Syrian refugees, but Somalia is the first place where it has used an app and home delivery system.

The U.N. agency, which won the Nobel Peace Prize this year, hopes to roll out online shopping elsewhere, said Arroyo. “If it works in Somalia it can work anywhere else.”

Nearly 100,000 out of the 500,000 people receiving cash aid monthly from the United Nations in Somalia are using e-Shop. The number of app users has doubled, from 47,000 at the end of March, before home delivery launched, to 94,000 by late October.

Abdirahman said COVID-19 was yet another reason she preferred shopping online. “We were afraid of catching corona,” she said. “We were lucky to get this application.”

One businessman said his sales have increased by 80% since his company began selling food on the app, now that people living in camps on the outskirts of Mogadishu can access his products via the app.

“They used to come a long way to our shops,” said Ahmed Nur Abdullahi Siyad. “Now they don’t have to pay bus fare.”