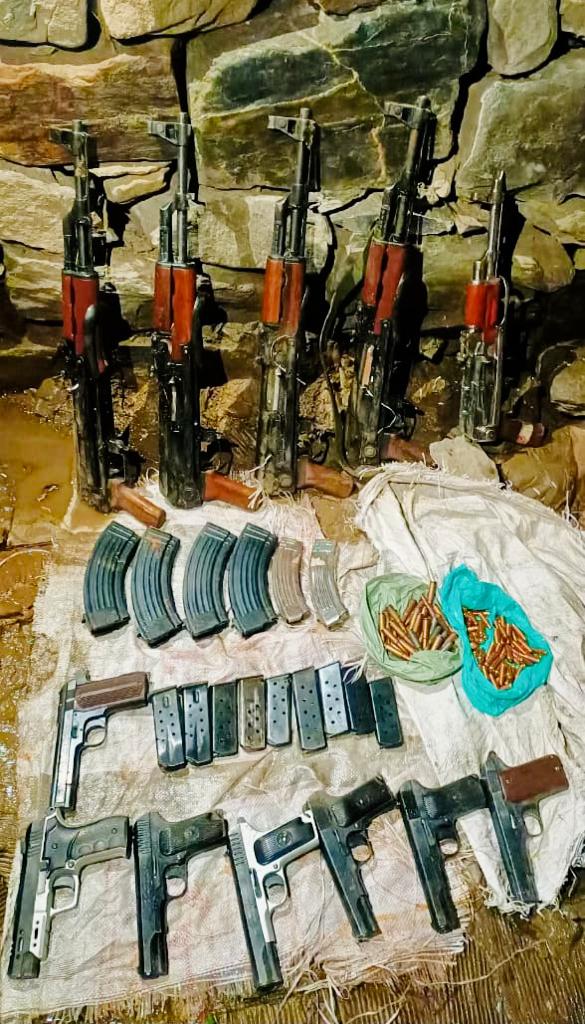 Some suspects taken into custody to ascertain facts, says police

Talking to news agency, a senior official said that the joint operation was launched by the Army, and Jammu and Kashmir police in Dhanni village close to the Line of Control (LoC) on Sunday evening leading to the recovery of 5-AK 47 Rifles, 6 Magazines, 7 pistols with 9 magazines besides ammunition.

He said that the Dhanni village is in the close proximity to the Line of Control (LoC) facing Lipa Valley which is under the observation of Pakistan Army posts.

A police spokesman in a statement issued to KNO said that acting upon specific information a Search operation was conducted by Kupwara police and Army in the Dhani, Taad of PS Karna area.

He said that during search operation huge cache of the following Arms and Ammunition were recovered, 05 Ak 47 rifles with 06 Magazines & 07 Pistols (9 Magazines) along with ammunition.

“Some suspects have also been taken into custody to ascertain the facts and to conclude the investigation on merits”, the spokesman said in the statement.

He maintained that the timely recovery of huge cache of arms and ammunition has thwarted any possible untoward incident in otherwise peaceful region and has scuttled the nefarious plans of Terrorist outfits to try derailing peace and harmony.

It was a continued demonstration of Preventive intelligence by JK Police, the spokesman said.

Meanwhile, a senior official said that the security agencies and civil administration in Karnah Tehsil continue to work hand in hand to negate the security threat to the people in the Union Territory of J&K.

He informed that in the last two years, a total of 16 weapons & over 50 KG of narcotics has been recovered from Karnah—(KNO)