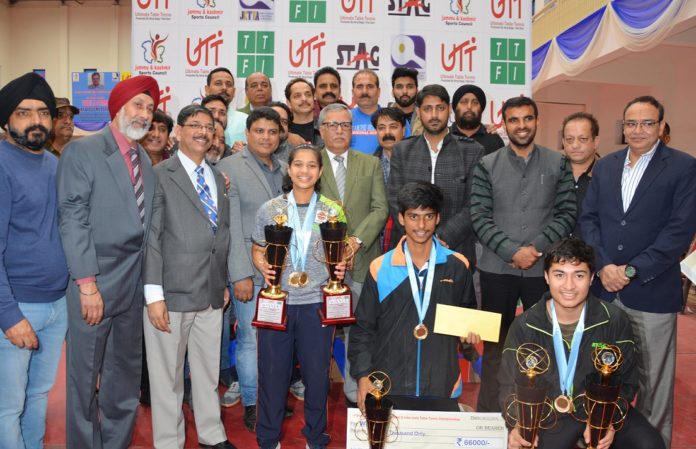 JAMMU, DECEMBER 08: Advisor to Lieutenant Governor, Farooq Khan today maintained that huge participation of youth in sporting activities is a sign of healthy and prosperous nation.

Speaking at the ceremony, Advisor Khan complimented the organisers for efficiently organising such events saying that the government has initiated numerous measures towards boosting sports and gaming activities in Jammu and Kashmir.

Describing children as architect of a nation, Advisor Khan said sports and games are important for development of mind and body, which in return would lead the country on the path of progress and prosperity. He added that through games youth can earn name and fame for themselves and the country as well.

The seven-day long event was inaugurated on December 2, 2019 which was organised by J&K Table Tennis Association and J&K Sports Council under the aegis of Table Tennis Federation of India.

On the occasion, Advisor Khan, who was chief guest on the occasion, distributed medals and trophies among the winning and runner-up teams of the tournament.

Meanwhile, at a separate event, Advisor Khan distributed trophies and certificates among the finalist at a quiz competition held at Abhinav Theatre.

The quiz competition ‘Bharat Ko Jano’ was organised by Bharat Vikas Parishad while school children from 17 states including J&K Union Territory participated in the event.

Speaking on the occasion, Advisor Khan said only a person can be called a true patriot when he or she knows about the country better than anyone.

Congratulating the students and the organisers, he said the quiz competition is the beginning of efforts towards making children aware about India including its constitution, history, economy, geography, besides other aspects of the country.

The quiz competition was held in both Junior and senior categories and the finalists will take part in the finale to be held in Bhubaneswar Odisha on December 19, 2019.