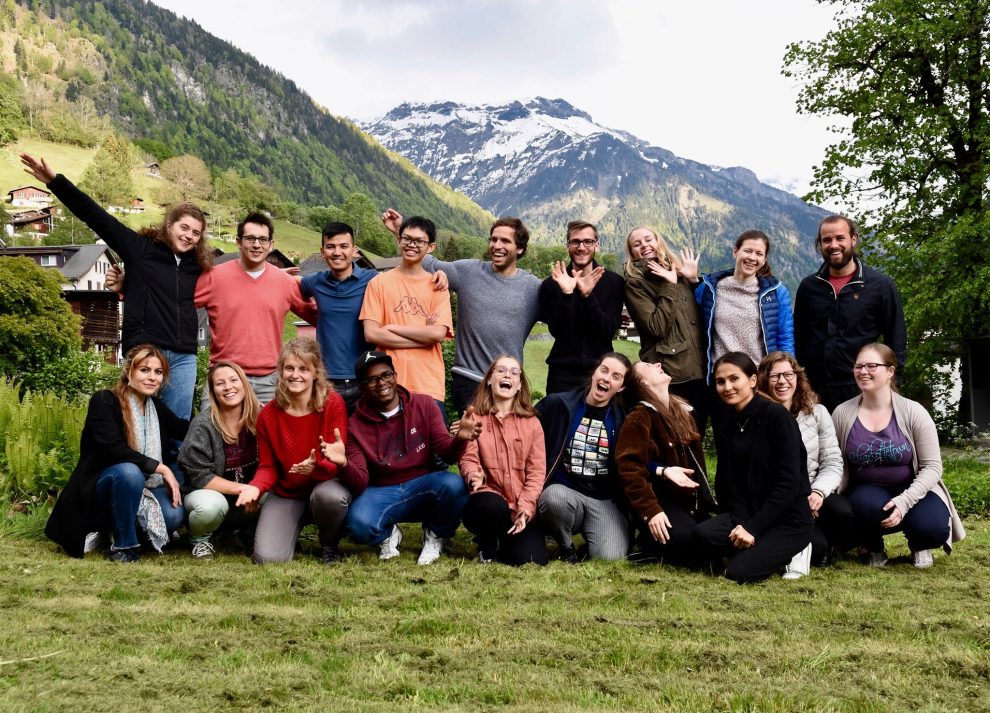 Editor’s Note: The following excerpt describes how Lisa Sophia Marti and her community of over 60 volunteers, made up of both locals and refugees, created a self-study tool in the form of a book and an app to help refugees learn local dialect and facilitate their entry into everyday life in Switzerland.

Out of the taxi window, Lisa Sophia Marti can see her destination approach. ‘Please, brother, can you stop here for me?’ she says in the Moroccan dialect, and the driver’s face twists into one of pleasant astonishment. For someone like her to be speaking his tongue!

While pursuing her bachelor’s degree in social science at the University of Bern, Switzerland, Lisa travelled to Morocco to study Arabic. Her passion for political and Middle Eastern studies brought her to the country to learn its language and work with a local NGO that supports refugees. But her newly acquired language skills were of no use on the streets, because the standard Arabic that she was learning was nothing like the spoken dialect.

‘It was very frustrating,’ Lisa recollects.

Luckily for Lisa, she got by due to the kindness of strangers who helped her learn bits of the local dialect. Like her fellow passengers in the shared taxi, who taught her what to say when she wanted the driver to stop the car. Or the old man who went through the local names of each vegetable she bought from him, just so she could learn them all. Or some other acquaintances who taught her the local way to say, ‘I’m really great.’

Being able to converse with locals in their tongue changed their interactions with her. ‘I was amazed to see how something so simple could open so many doors and make me feel much more integrated into daily life.’

Lisa became aware of a similar language barrier between locals and refugees back home too. In the German part of Switzerland, people learn standard German, but locals speak a very distinct dialect. Knowing fi rst-hand that language is the first step to feeling part of the society that you are living in, she immediately got together with a few friends to find a solution.

They wanted to break this barrier between refugees and locals and, more importantly, give the refugees a choice between what they wanted to learn, what was important to learn and what was available to learn, all with the ultimate aim to create a more inclusive society.

Their project, ‘voCHabular’, does just that through a self-study tool in the form of a book and an app that helps facilitate interaction and thereby the entry of refugees into everyday life in the country.

The first batch of 2000 copies sold out in the first month, and the project now includes interactive books covering Arabic, Farsi and English translations to (Swiss) German.

But a by-product of the project that Lisa cherishes equally is the community that they have built. She was certain that she wanted refugee voices to be part of the project and so, she brought together a team of over sixty volunteers, both refugees and locals, to co-create the first book.

Owing to the pandemic, voCHabular has had to adapt to an innovative online-offline hybrid model, which has slowed down work, but the team perseveres in any way they can. Like partnering with ‘Food for All’, a food bank system started by their co-president—an undocumented refugee himself—to donate 300 books along with food for all those who have had their German classes put on hold. They also created a solidarity fund for voCHabular members that struggled during these challenging times and participated in online campaigns to raise awareness about the refugees in Switzerland and at the borders of Europe. All of this happening while they continued to translate the book in new languages like French, Turkish, Tigrinya and Spanish.

In December 2020, voCHabular celebrated their fifth anniversary. ‘We tend to focus on offering rational solutions to global challenges and we forget about the feelings. A big part of being human is our relations with one another,’ says Lisa, who believes that kindness, as strangers had shown her in Morocco, is what builds trust and connections.

Excerpted with permission from #KindnessMatters: 50 Inspiring Stories of Empathy, Compassion and Kindness from People all over the World, UNESCO MGIEP, Penguin India. Read more about the book here and buy it here.

The Dispatch is present across a number of social media platforms. Subscribe to our YouTube channel for exciting videos; join us on Facebook, Intagram and Twitter for quick updates and discussions. We are also available on the Telegram. Follow us on Pinterest for thousands of pictures and graphics. We care to respond to text messages on WhatsApp at 8082480136 [No calls accepted]. To contribute an article or pitch a story idea, write to us at [email protected] |Click to know more about The Dispatch, our standards and policies
Tags#Kindness Matters Penguin India Stories of kindness UNESCO MGIEP

“Ganga’s Choice and Other Stories”: Vaasanthi’s short stories powerfully showcase the courage and strength of ordinary people
“The Grand Anicut”: In this novel set in 1st century CE, a dam is being constructed on the Kaveri by the Cholas
Comment