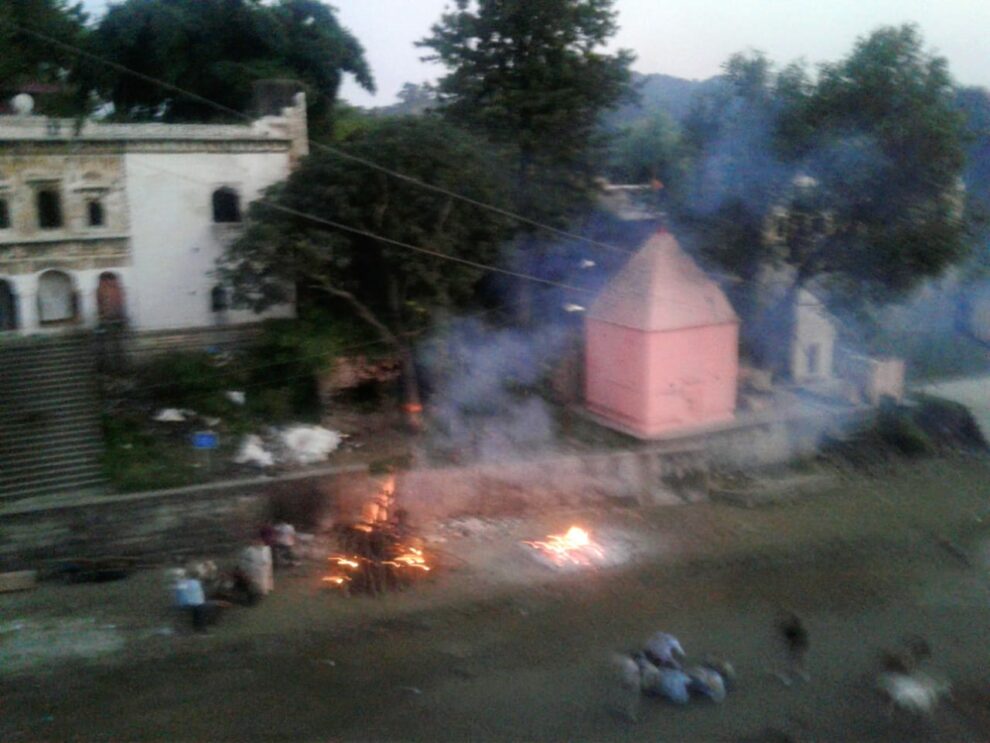 Bhushan Parimoo
Add Comment
Faith is believed to be so strong that it moves mountains, but the current sorry state of Devika River and Purmandal village makes the soul to cry. The other way, the soul of Devika is being made to cry at Purmandal.

About thirty kilometers south-east of Jammu, Purmandal village on the banks of Devika River, is also locally called as Chhota Kashi for religious importance of the water source and historical significance of temples.

Hindu people take pilgrimage to the Purmandal village and take bath in the Devika River, as they believe bathing in the river cleanses soul.

Faith is believed to be so strong that it moves mountains, but the current sorry state of Devika River and Purmandal village makes the soul to cry. The other way, the soul of Devika is being made to cry at Purmandal.

Devika is squeezed of its vibrant life, pushed to miserable death by degrees -long live the administration. A great leap forward, holy mother has been constantly attacked by its votaries who proved one of the worst adversaries.  The cremation of human bodies and the incineration of urban waste is being carried in full view at one’s free will, on the entire stretch of main Purmandal, upsurging its dignity and health.  It is now for all practical purposes a cremation and incrimination of solid waste ground, the clouds of smoke issuing from the burning drift all over site with repulsive, nauseous, and disgusting, say local people. Similar complaints were made about the burning of urban waste.

Rivers symbolize life, fertility, freedom, a path, and the passage of time.  It is a common practice. It has been a common practice with our elders, on rising in the morning, to ask pardon of the earth before he steps on the floor. Thus, before setting foot on the ground, he will say: “O Goddess, who is clothed (surrounded) by the sea, whose breasts are mountains, and who is the wife of Vishnu, I bow down to thee; please forgive the touch of my feet”.

We are very much conscious of facts that no one can deny that right to dignity and fair treatment, which is guaranteed under Art.21 of the Constitution is, not only available to a living person but also to his body after his death and that every human being is entitled for decent disposal of his body after his death in accordance with the culture and tradition. At the same time, these cremations have to be carried as per law in force, which leaves anything to speculations. National Green Tribunal admits that cremating of human bodies causes air and water pollution and has recommended measures to be taken to contain it.

Way back in 2003, Dr Pawan Kotwal the then the District Development Commissioner, Jammu had issued an order which said:

“Whereas this office has examined the issue on public representations, and sought report from various Departments in light of the said application, namely, Chief Engineer, PWD, R&B Jammu, SDPO Samba and Tehsildar Samba, and ordered for shifting of the Cremation Ground to the newly constructed Cremation Ghat at village Purmandal in Tehsil Samba”.

It further says that “from the perusal of these reports it has been established that the cremation of the dead bodies at existing Shamshan Ghat is causing great nuisance to the inhabitants of Purmandal in shape of emission of foul smell, air pollution and water source pollution as well as mental agony and injury to health of people. Sometimes, some parts of dead bodies which remain unburnt are dragged by the animals to the habitation and the locals have to arrange disposal of such parts at their own. It was further elaborated that it has also been reported that the Shamshan Ghat shed constructed downstream Devika Nadi near bus stand is not being put to use for the purpose it was meant for.

Further, “various government institutions, such as Primary Health Center, BMO’s Office, Higher Secondary School, Girls middle School and other institutions are also situated on the both sides of upstream Nallah. The cremation of dead bodies at present site is also  causing nuisance and danger  to the health of the visitors to these institutions and school children etc. In view of the reasons cited above, it has become imperative to prohibit the cremation of the dead in its present location in the bed of Devika stream”.

Invoking powers vested in him under section 133b of  Cr.P.C (read with section 10 of the village Sanitation Act), the Deputy Commissioner ordered that the cremation of dead bodies shall take place only at the cremation shed,  constructed  for the purpose downstream near the  Bus stand Purmandal with immediate effect and any violation of the prohibitory orders  shall be dealt strictly under law.

The copies of the order were sent to the Divisional Commissioner Jammu, Joint Director information for wide publicity and Manager Ranbir Government, Jammu for Publication in the Government.

In the light of the above, no one can feign ignorance of the order which should have been enough impetus to be derived from to act under public interest. Nothing heard of any action taken in this public interest matter which has been proving he health hazard of highest order.

Two decades on, instead containing the situation, it has been allowed to go from bad to worse, and to a hopeless one.

Jammu and Kashmir Pollution Control authority, under whose jurisdiction it falls to ensure quality of air cannot on any account absolve itself from the responsibility vested in it by law. In last two decades, in this matter, Pollution Control Authority has just sent a few letters, to Deputy Commissioner, Assistant Development Commissioner Samba and the Chief Executive Officer, Suruinsar Mansar Development Authority. There is no record if any officer has visited the area to study in detail the matter as it has been developed into worrying cancerous mode.

Pollution Control Authority is supposed to tour the area and make studies. The State under the constitution has to endeavour to protect and improve the environment and to safeguard the forests and wildlife of the country brought in the responsibility by the 42nd Amendment, 1976. It has to be read with Article 51-A (g) which deals with Fundamental Duties of the citizens states: “It shall be the duty of every citizen of India to protect and improve the natural environment including forests, lakes, rivers and wildlife and to have compassion for living creatures.” Both the Act have to coexists, but near allowed by the Administration to go other under the Constitutional obligation to which we owe allegiance.

The writer is a noted environmentalist based at Jammu

Join The Dispatch Whatsapp Group to stay updated
The Dispatch is present across a number of social media platforms. Subscribe to our YouTube channel for exciting videos; join us on Facebook, Intagram and Twitter for quick updates and discussions. We are also available on the Telegram. Follow us on Pinterest for thousands of pictures and graphics. We care to respond to text messages on WhatsApp at 8082480136 [No calls accepted]. To contribute an article or pitch a story idea, write to us at [email protected] |Click to know more about The Dispatch, our standards and policies
TagsBhushan Parimoo Devika River Purmandal

May 1942: When the National Conference had 42-hour long ‘floating’ meeting over the Dal Lake
Comment