With the Maharaja having already left Srinagar for the relative safety of Jammu, the morale of Srinagar was very low. If the Indian Army had not arrived by 27 October 1947 and taken charge, anything could have happened in the power vacuum. Skeikh Abdullah, who was in New Delhi, confirmed to both Nehru and Mahajan that he supported the accession. This now paved the way for the creation of a power diarchy in the state. On 30 October 1947, the Maharaja appointed Skeikh Abdullah as the Chief Executive Administrator with Mahajan continuing to function as the Prime Minister. Abdullah’s long journey that started in 1931, with his political agitation against the autocratic rule of the Maharaja, had now resulted in the Maharaja appointing him the de facto Prime Minister of the state.

The Maharaja, now having accepted Abdullah as a political representative of the Muslim majority in his truncated and disintegrating state, opened the way for Mountbatten to play his next card. The argument for plebiscite was to ascertain what the public wanted. Given that the overwhelming population of the state was Muslim and a communal conflagration was in progress in the state and in the neighbouring state of Punjab, the apprehension in the minds of both Nehru and Patel was that without Skeikh Abdullah on their side, a single comprehensive plebiscite would tilt the scales towards accession to Pakistan.

This would include giving both Jammu and Ladakh, where Muslims were in a minority, to Pakistan. The combined numbers in these two regions would be insufficient to fight the Muslim majorities in the valley, the Poonch belt and the Gilgit Agency. Both Nehru and Patel were unsure if Abdullah wanted to accede to Pakistan. They wanted to be sure that he was on the side of accession to India, so that he could bring in the votes from the valley, the Gilgit and Poonch in a plebiscite. Therefore, it was necessary to both lure and reward Abdullah with political power so that the majority in the state voted for India, if ever a plebiscite was called for.
Mountbatten understood this reality very well and his major contribution to the Maharaja’s accession may well have been to formally introduce the requirement for a plebiscite and to persuade both Nehru and Patel of its desirability. This was Mountbatten’s answer to the pressure that he was subjected to, by the British deep state, to frustrate the accession of the state to India. When in his radio broadcast on All India Radio, on 2 November 1947, Nehru confirmed that the fate of Kashmir is ultimately to be decided by the people, and that the pledge India had signed to have a referendum would be fulfilled. Patel may well have been uneasy about the consequences of handing over political power to Abdullah, and he may have preferred an unqualified accession by the Maharaja to India. However, Nehru cast his lot with Mountbatten and Patel was overruled, India accepted the principle of the plebiscite. By giving Abdullah the plebiscite card, Nehru had institutionalised its use to prove that the Instrument of Accession was not final in itself.

It is clear that accession meant different things to different people. For Sardar Patel, accession meant that Jammu and Kashmir would become a part of India beyond all doubt, not least to guarantee the security of the northern frontier. For Nehru, accession was a means to challenge the two-nation theory by creating a secular state within the Indian Union out of a Muslim-majority province, albeit through the efforts of Sheikh Abdullah. For Mountbatten, accession, with the twist of the plebiscite, meant that the British deep state could consolidate the gains of Operation Gulmarg and execute Operation Datta Khel, thereby reinforcing the need for a plebiscite to ultimately legitimise their actions.

For Patel, the perception of the security challenges facing post-Partition India coincided with the perception of the security challenges facing British India. There was no difference as India had inherited the mantle of power from the British Raj, notwithstanding the creation of the Dominion of Pakistan and its sequestration from the body of India. The Department of External Affairs of the Dominion of India sent a memorandum on 25 October 1947 to British Prime Minister Clement Attlee.

This memorandum heavily relied upon the conceptual and strategic conclusions drawn from two other documents generated from the Indian Government that we have spoken of in the third chapter of this book. The first document, in the form of a memorandum, was written by Sir Olaf Caroe, the then Secretary of External Affairs, on 19 September 1945, in reply to certain queries raised by the new British Foreign Secretary, Ernest Bevin. The second memorandum was written in 1946 when the British General Staff prepared a top-secret memo entitled, ‘Appreciation of the scale of direct military assistance which could be provided in support of Tibet’.

Geopolitically, as mentioned in the Department of External Affairs’ memorandum of 25 October 1947, India was just about to suffer a major defeat, just like the defeat of the British in Afghanistan, in 1841–42. The Gilgit Agency, which was the key to the defence of the western end of the northern frontier, the crucial zone where Afghanistan, Russia and China meet, was almost slipping away from the control of Jammu and Kashmir.  It seemed like it would formally be placed under the flag of Pakistan, in less than a week’s time. Consequently, India’s north-west frontier had been pushed several hundred miles to the east and a century of British strategic planning (which included the sale of Kashmir to Gulab Singh in 1846) had been undone.
The real goal of the military intervention which began on 27 October 1947 was to gain control over not the valley of Kashmir but the Gilgit Agency. The memorandum of 25 October 1947 makes it clear that the state of Jammu and Kashmir was of fundamental importance to India and that had nothing to do with the fact that it was Nehru’s ancestral home. The legal merits of the Maharaja’s Instrument of Accession were also not the main reason for the state’s significance for India. It was the symbol of India’s status as the true successor to the British Raj.
The announcement of this memorandum, possibly inspired by Sardar Patel, was in congruence with the interests of the British deep state. However, unless Patel was made the Prime Minister of India, the British deep state could not be sure that India could be relied upon to deliver on Britain’s strategic interests. That was the paradox which caused the anxiety for the British to immediately execute Operation Datta Khel, in order to thwart the realisation of Patel’s strategic vision for the defence of the Dominion of India.

The Indus, that flowed through Ladakh, was extremely important for the survival of the people of Pakistan. The corollary of Operation Datta Khel was that the takeover of the Gilgit Agency would provide Pakistan a means to outflank India in the race for Ladakh and the waters of the Indus.

Only a week alter the memorandum of 25 October 1947 was sent to Attlee, Mountbatten and Ismay flew to Lahore to discuss the Kashmir crisis with Jinnah and Liaquat Ali Khan. This summit was inconclusive. Ismay was put in the uncomfortable position of opposing the party line of the British deep state. Liaquat Ali Khan visited New Delhi in December 1947 and Mountbatten, Nehru, Baldev Singh and Ayyangar followed him to Lahore.
For a plebiscite to happen, Pakistan needed the Indian Army to withdraw and then have a ‘neutral’ caretaker government to replace the Mahajan-Abdullah diarchy. By now, post-Operation Datta Khel, the Government of India was convinced that the Pakistani Government had officially sponsored both the operations. During the last two months of 1947, the Indian Army succeeded in breaking the backs of the raiders and securing Srinagar. On 1 January 1948, India put forth its case before the security council of the UN. 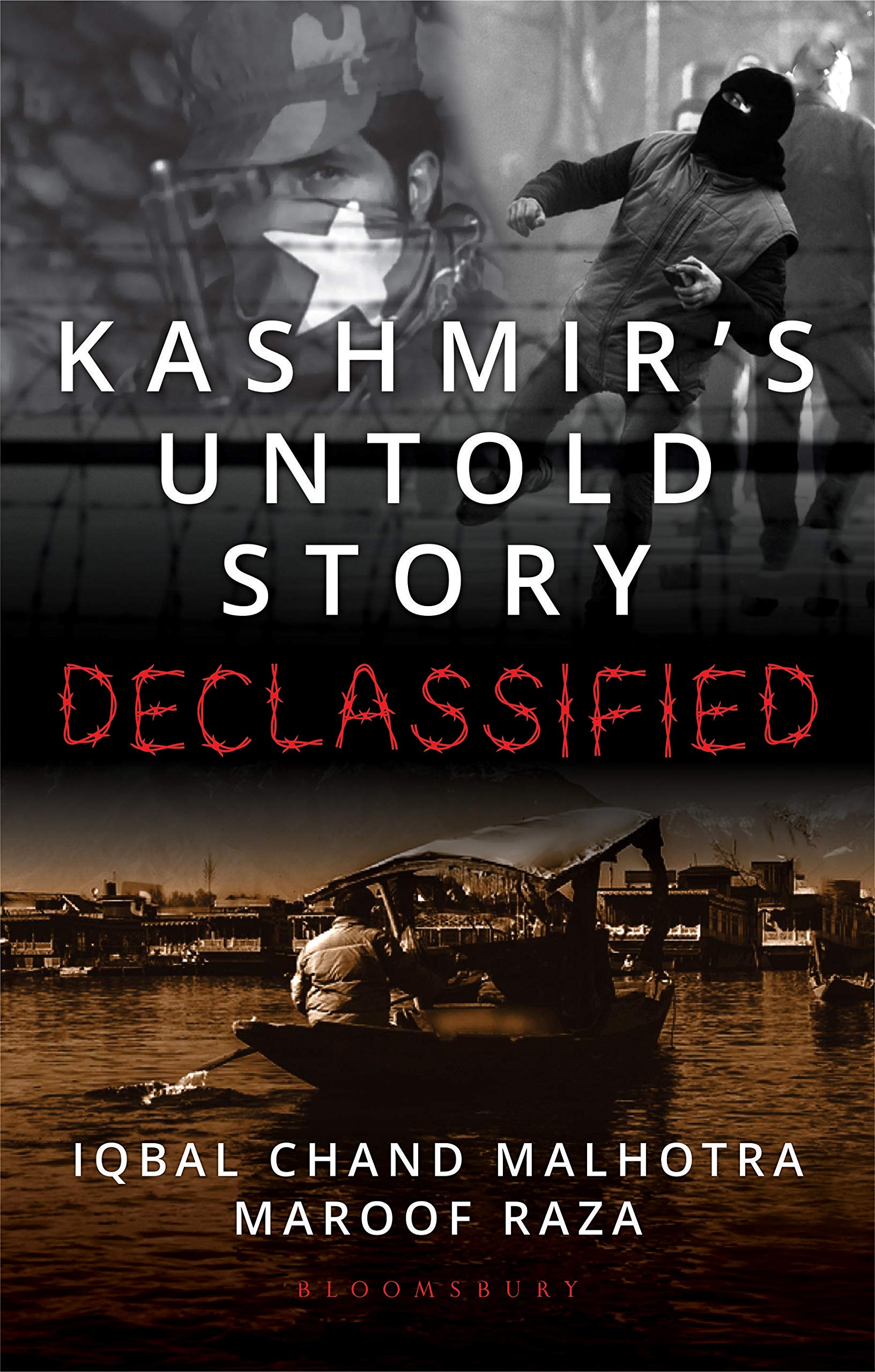 "Mapping The Great Game": Tales of derring-do of explorers, spies and map-makers who helped map a large part of Asia as we know it today
Riaz Dean on "Mapping the Great Game": 'This book is about the extraordinary pioneers who explored much of Asia during the 19th century to fill in large portions of its map'