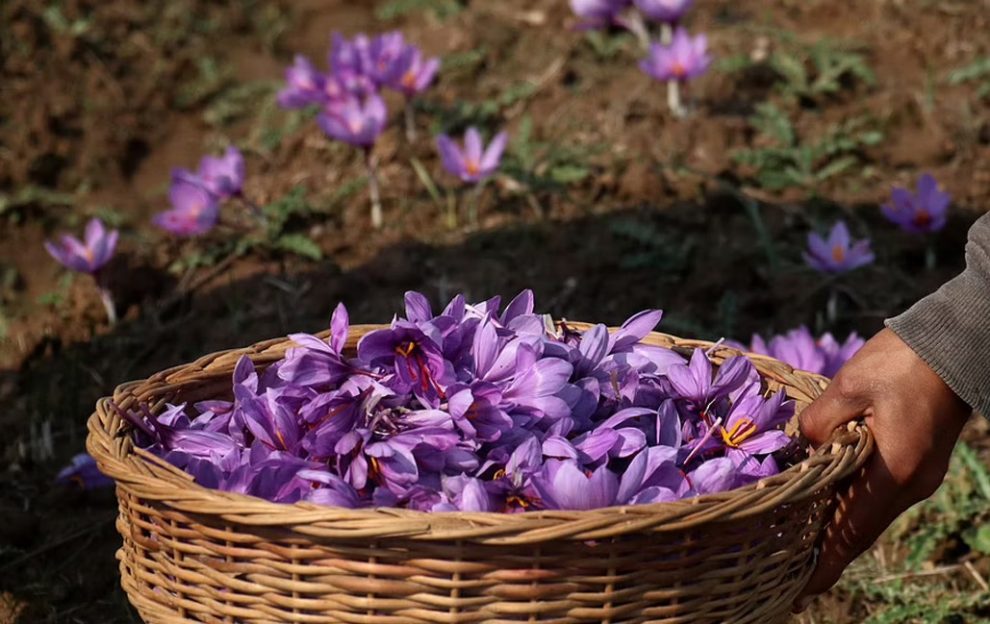 Influenced by the cultivation of saffron in the Kishtwar area of Jammu region, the Rajouri administration picked up the idea of Saffron cultivation in the district.
FacebookTwitterPinterestWhatsApp

Jammu: The Rajouri district came up on the saffron map of Jammu and Kashmir, when a farmer Vishal Chander Sharma successfully undertook saffron cultivation in his fields in this border district, surprising people with the purple-orange flower bloom in their neighbourhood.
Influenced by the cultivation of saffron in the Kishtwar area of Jammu region, the Rajouri administration picked up the idea of Saffron cultivation in the district.
Apart from Kashmir valley’s Pampore belt, saffron is cultivated only in Kishtwar district outside the valley.
“It is a dream cum true. I never thought saffron could be cultivated here (Rajouri). But we were successful in bringing in new areas of J&K on the saffron map of the UT,” farmer Vishal Chander Sharma said.
Sharma is highly thankful to the district administration of Rajouri and department of agriculture for motivating him to cultivate saffron in this area.
He was previously dependent on subsistence agriculture and was cultivating wheat and maize but now he is keen to cultivate saffron crop in his fields to earn more income and to improve his socio-economic status, officials of agriculture department said.
Giving details, officials said that the district administration desired the project to be taken up on an experimental basis by the agriculture department in Darhal Sub division as the terrain and climatic conditions of that area are almost akin to that of Kishtwar.
“The Department selected one farmer Vishal Chander Sharma of panchayat Kot Dhara, block Dhangri, zone Fatehpur. The farmer possesses only 15 kanal un-irrigated land in which he has been growing wheat and maize crops,” a senior official said.
He agreed to cultivate saffron in 15 marlas for which the saffron seed (ora) was purchased by the agriculture department from Pampore Kashmir and supplied to him. In addition to the seed, some other assistance like fertilizer, labour charges, weedicides etc were also provided to him.
With no prior experience in growing saffron, help of the experts from Kishtwar was sought who assisted Sharma in saffron cultivation.
“Sowing of the seed was done on August 24, 2021. Blooming started on December 12, 2021. The blooming process continued for 15 days resulting in 734 flowers in total and on average 45-50 flowers per day. Plucking of the flowers was done on the same day of blooming,” an officer said.
The farmers of the adjoining area are also fascinated and expressed their desire to cultivate saffron in the forthcoming season, he said.
Now the challenge for the agriculture department and the farmer is protection, preservation and multiplication of the seed for future cultivation, officials said.
Saffron cultivation has long been restricted to a limited geographical area in J&K, mainly Pampore, followed by Budgam, Srinagar and Kishtwar districts.
After the successful conduct of saffron cultivation trial, the district administration and the department of agriculture are also looking at extending the cultivation of saffron to other areas where it feels will favour its cultivation to increase farmers’ income.
Administration Rajouri under the leadership of DC Rajouri, Vikas Kundal, is making persistent efforts to ameliorate the socio-economic condition of the farmers by motivating them to go for commercial agriculture from subsidence agriculture and concrete measures are being taken in this regard.
Saffron cultivation trial is just one more move in this direction and much more to come in near future for the welfare of the farmers community, officials said.