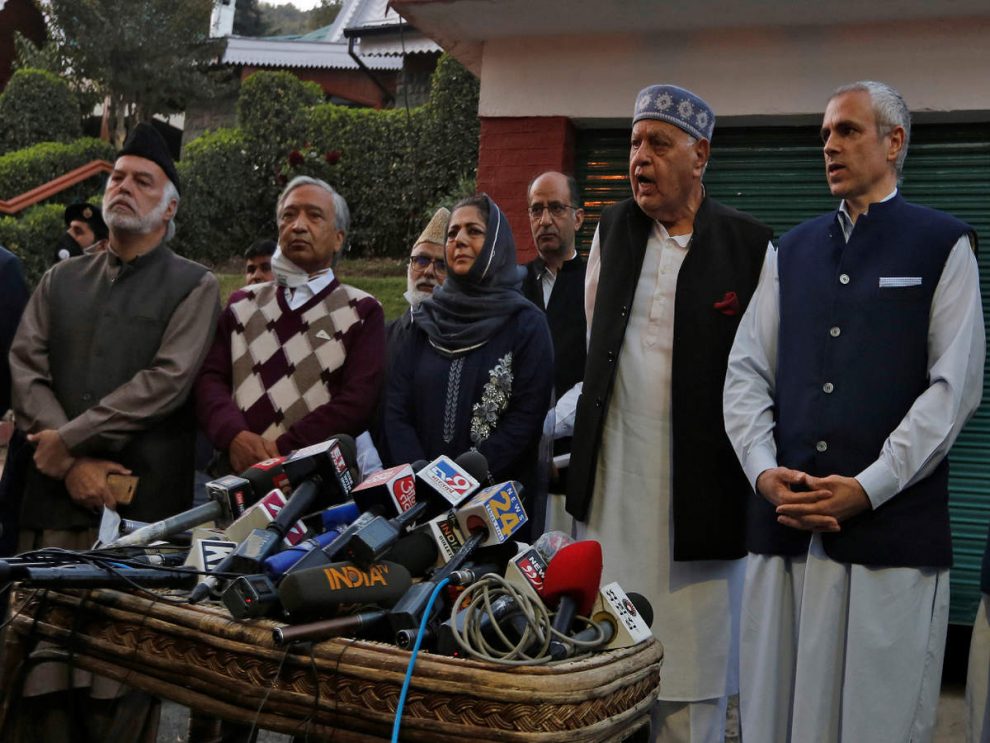 After over two years of curbs, the political activity seemed to pick up towards the last quarter of the year with mainstream political parties like National Conference, People's Conference and new-entrant Apni Party holding rallies and workers' conventions across the union territory.
FacebookTwitterPinterestWhatsApp

Srinagar: The Jammu and Kashmir administration tightened its grip over the situation in the union territory with very little political activity allowed in 2021 but the draft proposal of the delimitation commission to give more seats to Jammu region briefly threatened to disturb the semblance of normalcy.

Protests, which were almost a daily fixture in the political spectrum of Kashmir, have nearly disappeared from the horizon and civil administration does not approve any requests for large assembly while heavy deployment of police and paramilitary troops ensure that no spontaneous demonstrations break out.

Political observers feel that the large-scale use of UAPA and Public Safety Act against dissenters has led to calm, which might be temporary in the long run.

The assessment has been proven right as Kashmir’s police chief IGP Vijay Kumar listed managing the funeral of veteran separatist leader Syed Ali Shah Geelani as one of the major achievements in the year-end media briefing.

The administration headed by Lt Governor Manoj Sinha seemed to have got the grip of the situation in the union territory as it successfully managed the fall out of the death of Geelani in September.

Given the popularity of the separatist leader, Geelani’s death was expected to bring his followers out on the streets. It might have very well happened but the authorities sealed off some roads for few days and snapped internet services for about a week to ensure it did not happen.

With armies of India and Pakistan agreeing to a ceasefire long the Line of Control (LoC) in February, the guns along the border areas fell silent. As security forces eliminated most of the top leadership of the militants in Kashmir, many would have believed that the situation was almost peaceful in Jammu and Kashmir.

However, things took a dramatic turn in October as the ultras started targeting unarmed civilians including those belonging to minorities.

Nearly a dozen persons were killed by the militants, the security forces upped their operations but in the process questions were raised on the genuineness of the encounters.

One such encounter — that took place at Hyderpora in November — drew national and international attention after it came to light that at least two of the three locals killed in the operation were not linked to militancy.

For the first time since abrogation of Article 370, the police were forced to return the bodies of slain men they had dubbed as overground workers of terrorists. In the wake of Covid outbreak, the police started burying the bodies of militants in remote areas of north Kashmir with only close relatives of the deceased allowed to take part in the final rites.

Union Home Minister Amit Shah finally visited Jammu and Kashmir — more than two years after the repeal of Article 370 that gave special status to Jammu and Kashmir and reorganising of the erstwhile state into two union territories.

Shah’s visit came in the backdrop of rising civilian killings by militants who hit back at soft targets after suffering major setbacks at the hands of security forces earlier in the year.

The home minister’s visit was high on symbolism as he addressed several constituencies during his extended four-day visit to the union territory.

His visit to the residence of a slain Muslim police officer, followed by a meeting with the families of those cops, political workers and ordinary civilians who fell to the bullets of the militants during year was a clear message to the nationalist forces that the government will not let them down even after they are gone.

Shah sought to boost the morale of paramilitary forces as he spent one night each in a BSF camp (in Jammu) and a CRPF camp (in Pulwama area of Kashmir). He also paid tributes to the 40 CRPF jawans who were killed in the suicide bomb attack at Lethpora in Pulwama district in 2019.

After over two years of curbs, the political activity seemed to pick up towards the last quarter of the year with mainstream political parties like National Conference, People’s Conference and new-entrant Apni Party holding rallies and workers’ conventions across the union territory.

While PDP also did the same in Jammu region, it failed to get permission from authorities most of the time when it tried to hold similar events in the valley.

The politicians believe that the easing of curbs on political activity was due to the government’s realisation that it cannot hold down dissent by force too long.

“It was due to the farmers’ agitation that the government has relented a bit but the activity is still nowhere near it should be in a vibrant democracy,” veteran communist leader M Y Tarigami said.

National Conference spokesman Imran Nabi Dar added that the results of District Development Council elections were also in part responsible for the lifting of curbs.

“There was a general realisation following the DDC elections that they cannot put down dissent by force for too long. People will speak whenever they are given a chance,” Dar said.

He said dissent was an important part of democracy “but it has been criminalised in Jammu and Kashmir”.

Both the political leaders felt that 2021 was disappointing but they were hopeful for the coming year.

“This year was full of disappointments as none of the expectations were fulfilled. The expectations were raised by the assurances given by the Prime Minister during the all party meeting in Delhi. Contrary to bridging the gaps, the gulf is widening at all levels,” Tarigami said.

The Communist leader said while the Prime Minister accepted that there are distances between Delhi and Jammu and Kashmir, there have been no conciliatory steps.

“Look at what is happening in villages and the city as well. Distances have increased and hearts have broken due to the widening gap. Instead of reaching out, the beaten tracks are followed. Harsh laws are used to silence the society including media,” he added.

Dar said the gravity of the situation can be guaged from the fact the dissenting works of local media are disappearing from their archives.

They might be disappointed with 2021 but the political class of Jammu and Kashmir is hopeful of a better year ahead. It is evident from the second rung leaders changing parties and other events which usually take place before an election.

How Rajouri joins saffron cultivation in J&K?
What are reasons for stampede at Shri Mata Vaishno Devi Shrine?
Comment