The picturesque, river-fronted state capital of Goa, Panaji, barely qualifies as a city if you compare it with the behemoth, largely urban clusters such as Delhi, Chennai, Mumbai, etc. Parts of the city have been reclaimed from the Mandovi River, which flows along the town’s length. Flanked by the river on the one side and the Miramar beach on the other, Panaji, with its Portuguese-era charm and evergreen canopies, was ideally suited for a pleasant drive-through in the ’90s, when traffic jams were rare and glitzy offshore casinos still hadn’t started bobbing in the waters of the Mandovi.

On an evening in October 2000, Parrikar parked his Maruti Zen outside the building that houses the offices of a media group, to pick up a senior journalist, who had been one of his confidants in his years as an opposition MLA and in whose political judgement Parrikar had a great amount of faith. There was no one else in the car, barring the two, as Parrikar drove around Panaji.

‘Sardinha’s government isn’t going to last long,’ Parrikar opened the conversation as he drove past the Mandovi promenade towards Dona Paula. The journalist was aware of the uneasiness among the players in the alliance government, which Parrikar and Francisco Sardinha had patched up. As many political observers at the time would claim, it was an alliance that was destined to come undone. It was, after all, an era that saw thirteen chief ministers in Goa from 1990 to 2000.
The journalist kept quiet and let Parrikar continue. At the time, Parrikar was just an MLA on paper, but everyone in Goa, including the humble poder (baker) who delivered bread to your home, knew that he was the one who called the shots in the Goa BJP and in Sardinha’s government.
Suddenly, Parrikar veered towards Mapusa en route to his factory at the Karaswada Industrial Estate. He asked the journalist, ‘Who do you think should be the new chief minister, in case the government falls?’ The journalist responded with some names of probable candidates for the top job.
The view building within the BJP at the time was that if the party were to make a bid for power, then a non-Brahmin should be appointed as the chief minister. The name that was doing the rounds, and more importantly had the blessings of party strongman L.K. Advani, was that of Bahujan Samaj leader Suresh Amonkar, a BJP MLA from the Pale assembly constituency. Amonkar was a qualified doctor, already a minister in the Sardinha-led alliance government and had served as the state BJP president in the past. But the RSS leadership, including Subhash Velingkar and Ratnakar Lele, were batting for Parrikar’s candidature.

Parrikar listened to him carefully as the journalist threw up alternatives. Only when he was done talking, did Parrikar say, ‘What do you think about me as the chief minister?’

It took a moment for the journalist to allow this fresh piece of information to seep in. ‘It should do, as long as you manage to get the Bahujan Samaj [a politically crucial collective of non-Brahmin caste groupings] on your side!’ He also said that unlike the reticent Amonkar, Parrikar’s daredevil performance as an Opposition MLA, especially in taking up cudgels vis-à-vis issues related to the Bahujan Samaj, had caught the popular imagination.
Both Parrikar and the journalist continued discussing the issue, as the Maruti Zen made its way back to Panaji, which was to be the future backdrop for Parrikar’s political triumphs and failures in the years to come.
The sum of Manohar Parrikar’s political journey as the chief minister across four truncated terms and over two decades can be summed up by two narratives, both involving his political mentor, former state RSS chief Subhash Velingkar.
The first occurred moments after Parrikar’s debut swearing-in as chief minister on 24 October 2000, after which he sought out and warmly greeted Velingkar at the Raj Bhavan. Ironically, among those who were missing at the Raj Bhavan ceremony was Medha, who had died in May 2000.

The swearing-in of Parrikar, for the long vilified Goa unit of the RSS, was perhaps their equivalent of the moment when Barack Obama was sworn in as the first black president of the United States of America in 2008. An occasion that brought the tough as nails American civil rights activist Jesse Jackson to tears, as he witnessed the moment.

Velingkar is not known to sob in public, but the magnitude of the event was just so immense. Some years ago it would have been unthinkable for many to even believe that the BJP could ever head a government in Goa, leave alone have a man with RSS credentials as the chief minister in a state where the party was viewed with extreme suspicion by the sizeable minority population.
Why, some years ago, the BJP was condescendingly referred to as the ‘Bhaji Pao Party’, with the who’s who of the state’s intelligentsia scoffing at the party’s prospects of coming to power.
Many summers later, however, it was Velingkar who began the first real campaign of substance against Parrikar, accusing the latter of not just lying repeatedly, but referring to him as the ‘master of U-turns’ and questioning his very credibility as a leader.
In his mythical summation of the former defence minister’s political journey, Velingkar described Parrikar as Abhimanyu, who managed to penetrate the chakravyuh of Goa’s degenerate politics with valour and guile, but later transformed into a Bhasmasur, a mythological demon whose touch would reduce any person to ash.
Manohar ‘Abhimanyu’ Parrikar’s journey as an administrator and a leader of the treasury benches began a year before Narendra Modi was appointed the chief minister of Gujarat and on a promising note. Right from the time he hopped out of the front seat of his official Maruti Esteem car outside the doorway to the Old Secretariat soon after the swearing-in ceremony, Parrikar seemed to put the right foot ahead. At least, that seemed to be the case for a while.

In 1999, around the time Parrikar was biding his time for his final somersault to power, India’s car giant Maruti released its highpowered variant 1.6 litre Maruti Baleno in the four-wheeler sedan segment.

In 2000, the Francisco Sardinha-led government supported by the BJP ordered a fleet of the expensive Balenos to add more zip to its ministers’ drive. Parrikar, at the time, had opposed the purchase of the luxury class vehicles, advising prudence in government expenditure.
It was this fleet of sedans, against which Parrikar chose to launch one of his first popular spectacles, to project himself as a newly elected chief minister who meant business and would wage war against wasteful expenditure.
Parrikar publicly announced that his ministers would not use the expensive cars as their official vehicles. When asked in an interview soon after he was sworn-in about how he would curb wasteful expenditure, Parrikar said: ‘I have already withdrawn the ministers’ Baleno cars and plan to reduce expenses by 10 per cent in the next fiscal year.’

For years, Parrikar preferred his Maruti Esteem as his official ride, switching over to a Toyota Innova some years later when he was an Opposition leader. The cause for the switch in official cars, Parrikar attributed to the risk of driving a sedan in the state’s mining belt, where he claimed, large trucks ran amok during the gold rush for iron ore in the years leading up to 2012.

Austerity as a government mantra was long forgotten in his later years as chief minister when the official ministerial fleet included Renault Dusters and fully loaded Toyota Innovas and ministers were also allowed to use their private high-end vehicles like BMWs, Mercedes, Audis and Jaguar SUVs. Parrikar himself switched to a Hyundai Santa Fe, which at the time cost upwards of Rs 23 lakh. 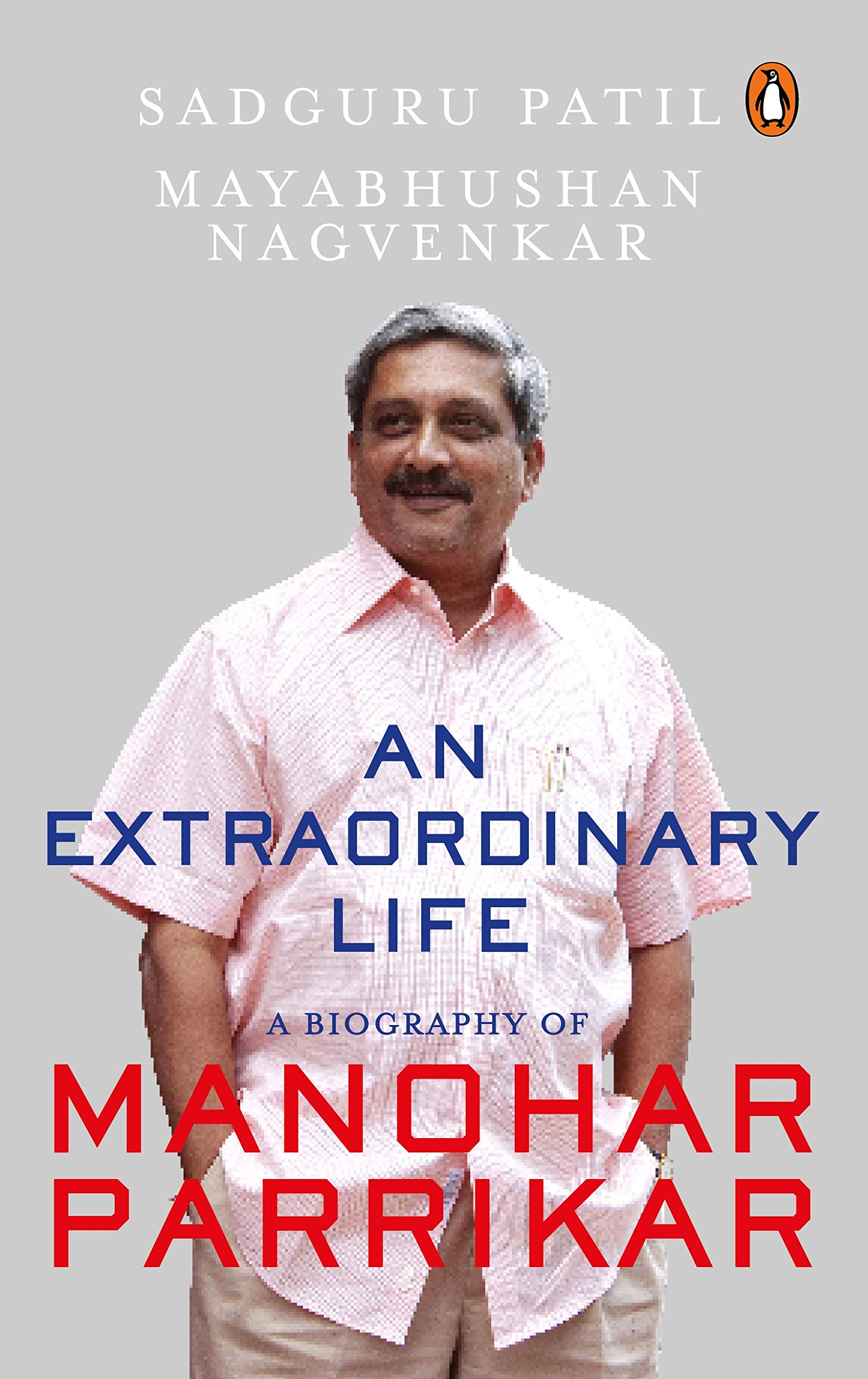 Excerpted with permission from An Extraordinary Life: A Biography of Manohar Parrikar, Sadguru Patil and Mayabhushan Nagvenkar, Penguin Ebury Press. Read more about the book here and buy it here.

In "The Demons of Jaitraya", Lord Hanuman and his trained warriors save the 21st century from the rakshasas who are the reason behind the current chaos and mayhem
Set in 16th century India, this novel is inspired by the legend of the young sultan of Malwa Baz Bahadur, and Rani Roopmati