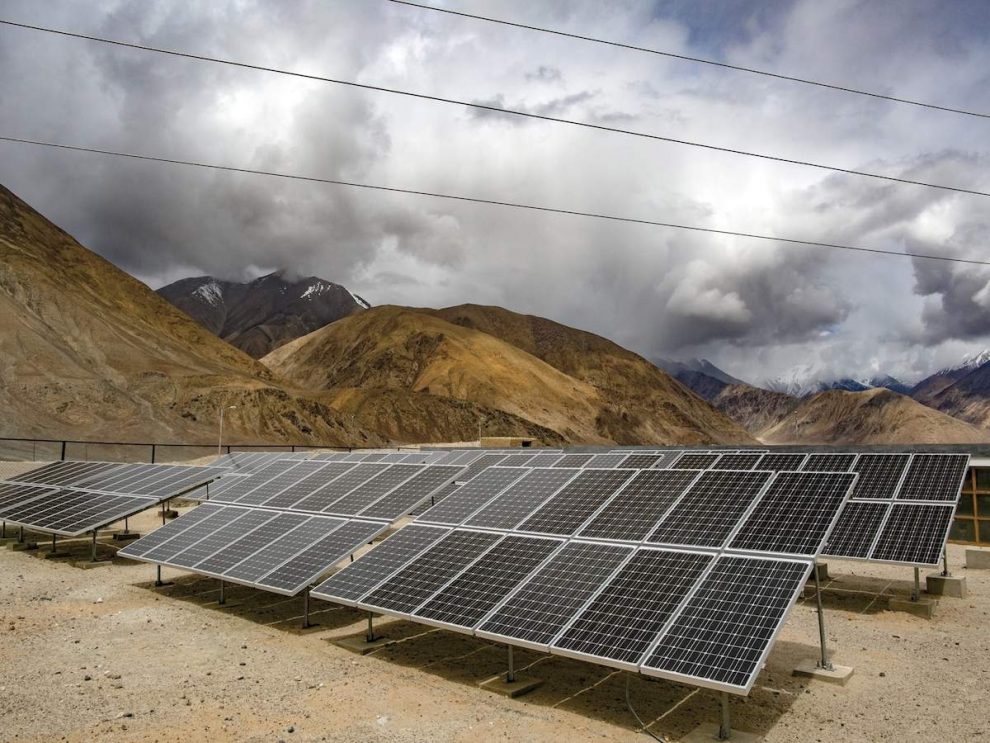 Editor’s Note: The following excerpt is from Jamyang Tsering Namgyal’s essay “Renewable Energy”. Jamyang Tsering Namgyal is a first-time Member of Parliament and represents Ladakh in the Lok Sabha as part the Bharatiya Janata Party. He is also the youngest chief executive councillor of the Ladakh Autonomous Hill Development Council, Leh.

Over the years, at the national level, India has successfully created a positive outlook necessary to promote investment in, demand for and supply of renewable energy that includes solar, wind, biofuels and hydel. In 2010, India launched the National Solar Mission (NSM), the first to be operationalized under the National Action Plan on Climate Change (NAPCC). Using a threephase approach, the mission’s objective is to establish India as a global leader in solar energy, by creating the policy conditions for solar technology diffusion across the country as quickly as possible. The mission’s initial target of installing 20 gigawatts (GW) of grid-connected solar power plants by the year 2022 has been enhanced to 100 GW.

In the year 2015, the Government of India announced a target of 175 GW cumulative renewable power-installed capacity by the year 2022. India has set its goals, increasing its power generation capacity from renewables from 80 GW to 175 GW by 2022 and then to 450 GW in coming times.

With ‘data as the new oil’, digital transformations, and the rapid use of technologies across the globe as well as in India, energy needs are bound to grow exponentially. The National Energy Policy (NEP) aims to build an integrated energy policy, providing access at affordable prices and greater sustainability. A number of initiatives are being taken to scale up access to clean energy. Some of these are the Solar Park Scheme, grid interactive rooftop and small power plants programme. Other such initiatives include loans and international funding, off-grid solar photovoltaics, the Ministry of New and Renewable Energy’s (MNRE) scheme of introducing 7 million solar study lamps and the Atal Jyoti Yojana (AJAY), among others.

Ladakh, too, has been playing its role in contributing to this sustainable goal, in the form of the Ladakh Renewable Energy Development Agency (LREDA). It is one of the largest off-grid renewable energy projects in the world. LREDA has a number of projects in the pipeline, such as 11 micro hydro projects with a total capacity of 11.2 MV, 125 solar photovoltaic power plants of varying capacities and others.

Ladakh, which has the highest intensity of solar radiation, is posed to be at the forefront of India’s mission of achieving a renewable energy state. The Solar Energy Corporation of India (SECI) aims to install 7,500 MW of solar energy by 2023 in Ladakh. This will be transformational. In his 2020 Independence Day speech, Prime Minister Modi has announced that he would strive to make Ladakh carbon-neutral by 2050 and thereby, set a precedence for the whole of India. Also, new initiatives by the Modi-led government on solar energy generation on barren agro lands is a step towards generating income for farmers as well as a contribution in maintaining ecological balance.

In terms of power from other renewables, India is forging ahead in the wind energy sector too with manufacturing based at about 10,000 MW per annum. India currently has the fourth highest wind-installed capacity in the world, with total installed capacity of 35.62 GW as of 2019 and 62 billion units were generated from wind power during 2018–19. Hydro energy has also been a great source of energy for India. States in the higher Himalayan ranges, such as Arunachal Pradesh, have been at the forefront in this area. India is also taking steps to expand biogas generation by implementing biogas-based schemes such as decentralized power generation in the capacity range of 3kw to 250 kw.

India has been playing a leading role in encouraging the establishment of a solar-based economy across the globe. In partnership with France, it has promoted the establishment of the International Solar Alliance (ISA) in 2015. Even as a developing economy, our country is transitioning towards clean, sustainable forms of energy. With rising global population and advances in modern technology, our dependency on energy sources is set to rise in the coming decades. However, one cannot turn a blind eye to the harms caused by traditional sources of energy. In this regard, renewable energy becomes essential for developing nations, especially, India, which is one of the largest energy consumers in the world. India has been proactive when it comes to utilizing resources to produce greener fuels. I am sure that under the able guidance of Modi, Ladakh will become a pioneer in harnessing the power of solar energy and set precedents for the entire nation to follow. In conclusion, India has tremendous potential to lead the world towards a greener and more sustainable future.

Excerpted with permission from the essay “Renewable Energy” by Jamyang Tsering Namgyal, from the book India Today; India Tomorrow, edited by Baijayant ‘Jay’ Panda, Rupa Publications. Read more about the book here and buy it here.

Join The Dispatch Whatsapp Group to stay updated
The Dispatch is present across a number of social media platforms. Subscribe to our YouTube channel for exciting videos; join us on Facebook, Intagram and Twitter for quick updates and discussions. We are also available on the Telegram. Follow us on Pinterest for thousands of pictures and graphics. We care to respond to text messages on WhatsApp at 8082480136 [No calls accepted]. To contribute an article or pitch a story idea, write to us at [email protected] |Click to know more about The Dispatch, our standards and policies
TagsBaijayant Jay Panda India Today India Tomorrow Jamyang Tsering Namgyal Rupa Publications

181 Fresh Covid-19 Cases, One Death Reported In J&K
Providing right opportunities to youth at right time must to keep them away from militancy: IG CRPF Charu Sinha
Comment