Two other mediums did their bit to make the Mughals and Akbar more endearing—theatre and comics.
Theatre, really, was the first medium, even before cinema, to have made the Mughals popular. It was a 1922 play named Anarkali that had inspired both K. Asif’s Mughal-e-Azam and the 1953 film Anarkali. This play was authored by Imtiaz Ali Taj in Lahore, who was just 22 when he authored this play written in the Chagatai tradition. Yet these two were only later and more popular adaptations of the play. The first two movies made on it were the 1928 silent films Loves of a Mughal Prince Anarkali made by Prafulla and Charu Roy, and Anarkali by Ardeshir Irani. Irani’s movie was almost shot and released overnight in direct competition to the Roys’.

Taj was quite up to date for the age he was living in. When Ardeshir Irani released Alam Ara, the first Indian talkie in 1931, Taj rewrote his play keeping in mind the new innovation in film technology. He always intended this to be made into a film, though his own efforts to translate his wish into reality didn’t succeed as by then, Bombay (now Mumbai) had outpaced Lahore in filmmaking. But the reputation of Lahore as the place to learn photography and filmmaking continued right up to Partition. For instance, the late actor Pran, who redefined the Bollywood villain, and who was originally from Delhi, was learning photography in Lahore when Partition happened.

Nevertheless, Taj’s talkie version was picked up by R. S. Choudhury in 1935 and another Anarkali was made. This film did well. The next big movie adaptation of the play happened in 1953 with Nandlal Jaswantlal’s Anarkali. All these Anarkali movies nearly stuck to the plot of the play, which was a tragic romance. Anarkali at the end in all these movies, just like in the play, was walled up alive. But K. Asif’s Mughal-e-Azam, while largely sticking to the plot, gave a positive ending to it by letting Anarkali live in the shadow of Akbar’s magnanimity. This was a way more serious attempt to portray Akbar as a humane king and was much more effective in creating a positive image of him.
Two Telugu films named Anarkali (1955), and Saleem Akbar Anarkali (1979) were also successful movies that created a positive image of Akbar by changing the ending of Taj’s play. The 1979 film was quite a hit as it was made by N. T. Rama Rao, who also essayed the role of Akbar.

There may have been other plays on Akbar, but these are relatively lesser known as movies weren’t made on them. But of late, there have been some plays that are hilarious takes on Akbar’s life or make him an overblown caricature. A play called Ab Akbar Banayega Mughal-e-Azam shows Akbar in the 21st century who is disturbed by K. Asif’s film and returns to earth to make his own version of the film.

Some depictions are also inspired by comics. Akbar-Birbal tales have been a childhood staple for many people of my generation. Today, children’s entertainment channels have whole series of such stories that are essentially funny but still offer great life lessons. As one all-time favourite story goes, Akbar threw a challenge that whosoever would spend some time in a freezing pond would be handsomely rewarded. A man took the challenge and actually completed the task. When Akbar asked him how he did it, the winner said he saw a lamp in the distance and tried to imagine warmth despite being skin-deep in the icy cold water. Akbar then dismissed him by saying that he had a source of warmth so he couldn’t be rewarded. That he was being unfair was visible to all but him. So Birbal decided to teach him a lesson. He invited Akbar for lunch and cooked khichdi by placing the fire-wood on the ground and the pot on a tree branch. When Akbar called it foolish on Birbal’s part to cook his food that way, Birbal reminded him that this is how he had reasoned to dismiss the achievement of that contestant.
In every such story, Akbar came across as a foolhardy man who wouldn’t see sense until his smart courtier figured out a unique way to tell him he was wrong. This was a wholly wrong interpretation of Akbar, but these cute stories made him appear cute and more accessible. Just like King Hooja in Tantri the Mantri series in Tinkle. Or Mr Wilson in Dennis the Menace.

But there were more serious takes on Akbar in comics, and some of these were surprisingly balanced in their articulation of Akbar’s personality and reign. The Amar Chitra Katha issue on Rana Pratap, for instance, portrayed Akbar as a good king even while portraying Pratap as an implacable enemy of the Mughals and a great patriot. This was pretty much in tune with Rajput bardic tales that glorified Rana Pratap and also Akbar.

Rajput sources suggest Akbar was held in high esteem in Rajputana. The epithets shriji, nath and chhatrapati were used for him, and he was portrayed as avatars of Vishnu—Lord Rama and Lord Krishna. Some accounts also called him an avatar of Arjuna. In fact, a 17th-century Mewar bardic poet compared the fight between Akbar and Rana Pratap with that of Karna and Arjuna. Here, Akbar was Karna, the elder brother of Arjuna. It isn’t difficult to understand what this implied: that both were actually separated brothers who were only victims of circumstances. This really worked in placing Akbar firmly in the otherwise quite endogamous Rajput clan structure. He was seen as a Rajput and no longer a mlechha (foreigner or barbarian).
Also, Akbar’s military successes in Rajputana and elsewhere were appreciated by the bards in florid verse that said Akbar’s conquests even shook the throne of Indra forcing the gods to form a council where Indra assured them that Akbar wouldn’t invade Indralok.

These bardic tales showed that to raise someone to a hero’s status didn’t necessarily require the casting down of another to the pits of ignominy. This same tradition was replicated at least in that Amar Chitra Katha adventure of 1970s vintage.

TV, of course, had a mixed understanding of Akbar, being a very different beast than cinema.
In 1989, Akbar made a TV debut in Shyam Benegal’s magnum opus, Bharat Ek Khoj. Based on Jawaharlal Nehru’s Discovery of India, this was a powerful portrayal of India’s history from the point of view of the inclusive Indian nationalism of Freedom Movement vintage. Two episodes were devoted to Akbar. Bollywood actor Kulbhushan Kharbanda, who played Raja Bharmal in Jodhaa Akbar two decades later, essayed the role of Akbar in Shyam Benegal’s production.
This Akbar was less majestic as Kharbanda brought in that neighbourhood uncle kind of familiarity to the character and spoke a more earthy language than the chaste and heavily Persianised Urdu of the Akbar played by Prithviraj Kapoor. But Kharbanda’s Akbar was more believable as this Akbar had regular fits of anger, was completely disappointed by the incompetence of his sons, shattered by the cruel murder of his closest friend Abu’l Fazl by his own son Salim, suffered from impotent rage at having to pardon the criminal as it was his own son and only son alive to succeed him, and a man who eventually chastised his son by personally slapping him hard several times and locking him up in the ghusalkhana to avenge Fazl.
This Akbar was more historically accurate than all the other Akbars combined, the lone dark spot being Jodha Bai who was still his wife in this serial. But he had a problem—he lived for only two episodes. And it was not enough to leave an imprint on public memory.
The next Akbar came to Indian TV nearly 25 years later, in 2013. That year, there wasn’t one but two serials that had Akbar as a principal figure. But while in one Akbar was the protagonist, in the other he was the antagonist.

The first one was Jodhaa Akbar, a small screen version of Gowariker’s epic but with many more characters and a weird plot. Actually, it only had the name common with Gowariker’s saga; rest of it was pure fantasy involving characters from history. This was touted as the most expensive TV production in India and had 566 episodes spanning two years.

The Akbar in this serial was immature, almost juvenile, easily fooled by his intriguing begums and other courtiers, and often took the side of a devious stranger while disbelieving an intimate family member. This saga was about daily intrigues in the life of the emperor, he mistrusting his wife and doing something utterly foolish, but eventually realising his folly and expressing gratitude to his wife Jodha for being such an enlightened and sacrificial wife.
Jodha was portrayed as the quintessential good Hindu Indian wife who put her husband and family before herself and acted as the family shield. The senior wife, Ruqaiyya, was portrayed as a gullible, jealous woman who was vain at one moment and generous at another. In fact, a temporary character called Benazir, a Poison Ivy-like woman who was actually an assassin, took Ruqaiyya hostage and humiliated her for being foolish and not being wise enough like Jodha who saw through her game. She mocked Akbar too for being less of a man who didn’t deserve the sacrifice made by the noble-hearted Jodha.

The audience loved this series, and when it went off air, a public petition was filed to bring it back on air. But what it essentially did was that it portrayed the Muslim emperor, his Muslim wife and other Muslims in the court as a tad inferior people as opposed to Jodha. And it also cast another wrong notion in stone, just like the eponymous film in 2008: that Akbar was called just Jalaluddin Muhammad originally and Akbar was a title given to him by his affectionate subjects. Yet despite these defects, this Zee TV serial did overall show the Mughals in favourable light. Its contemporary on Sony TV portrayed a radically different picture of Akbar in Bharat Ka Veer Putra Maharana Pratap.

This series also ran for over two years starting from 2013 and had 539 episodes. It was not a serial about Akbar but a supposed biopic on Mewar King Rana Pratap Singh Sisodia. But right from the first episode, it became a show about a Hindu king fighting for his honour against Muslim enemies. 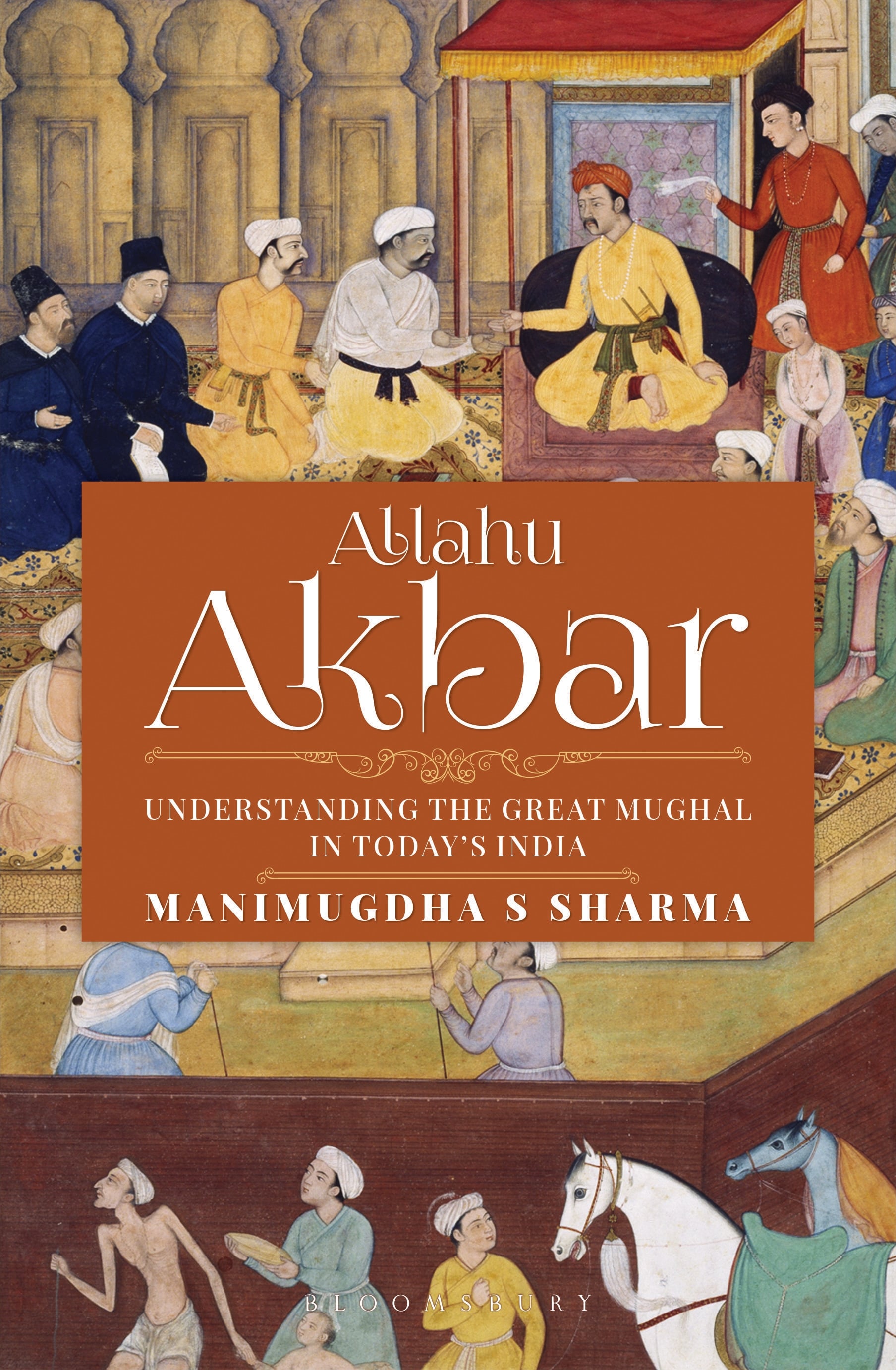 Sudeep Chakravarti on "Plassey": 'The back story of The Battle of Plassey is a mix of aggressive mercantilism married to geopolitics, with the French too playing a pivotal role'
Pankaj Dubey on "Trending In Love": 'Socio-political undercurrents of the present times add substantial layering to the book's narrative'