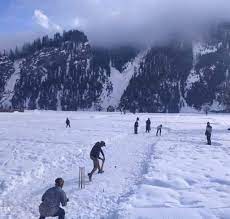 GUREZ: The viral video of boys playing cricket in Gurez on the social platform has caught the eyes of people from all over the world including International cricket players.

The photographs and videos of snow cricket played on the frozen track at snowbound Gurez valley, which is cut-off since December following the snowfall and is likely to remain disconnected for a few more months, are presently viral on social media and are attracting the attention of celebrities all over the world.

An Australian batting star, Marnus Labuschagne, who plays internationally for the Australian national team and domestically for Queensland also shared the video of young boys playing cricket over snow at Bagtore with a caption “how good is this”.

Fakhar-e-Alam, a famous Pakistani actor, TV host and singer also shared the video of the cricket match played on a frozen track in Bandipora’s Gurez valley and wrote: “I wanna play cricket here with these guys….this looks so much fun..”

However, the locals from Gurez after witnessing such a response from the people on the social media platforms, hoped that the local youngsters would get support from the BCCI and other international players.

“Hope @BCCI @BCCIdomestic @SGanguly99 @IrfanPathan @ICC will support our younsters to perform on national and international level Gurez valley is full of talent needs little bit support from administration and Govt I assure starts will come from Gurez valley,” a local from Gurez wrote on Twitter.

As already reported people of Gurez, living in the border area organized snow cricket tournaments on the frozen snow ground in a bid to promote tourism during winters in Gurez and attract the attention of the administration.

The youngsters of three villages including Markoot, Achoora and Bagtore in the border valley of Gurez, have organized three snow cricket tournaments on the snow clad ground.

According to locals, the only aim behind organising these tournaments is to attract the government’s attention to this area as there is a lot of potential for winter sports activities in Gurez—(KNO)

The Dispatch is present across a number of social media platforms. Subscribe to our YouTube channel for exciting videos; join us on Facebook, Intagram and Twitter for quick updates and discussions. We are also available on the Telegram. Follow us on Pinterest for thousands of pictures and graphics. We care to respond to text messages on WhatsApp at 8082480136 [No calls accepted]. To contribute an article or pitch a story idea, write to us at [email protected] |Click to know more about The Dispatch, our standards and policies
TagsTheDispatch Cricket Gurez