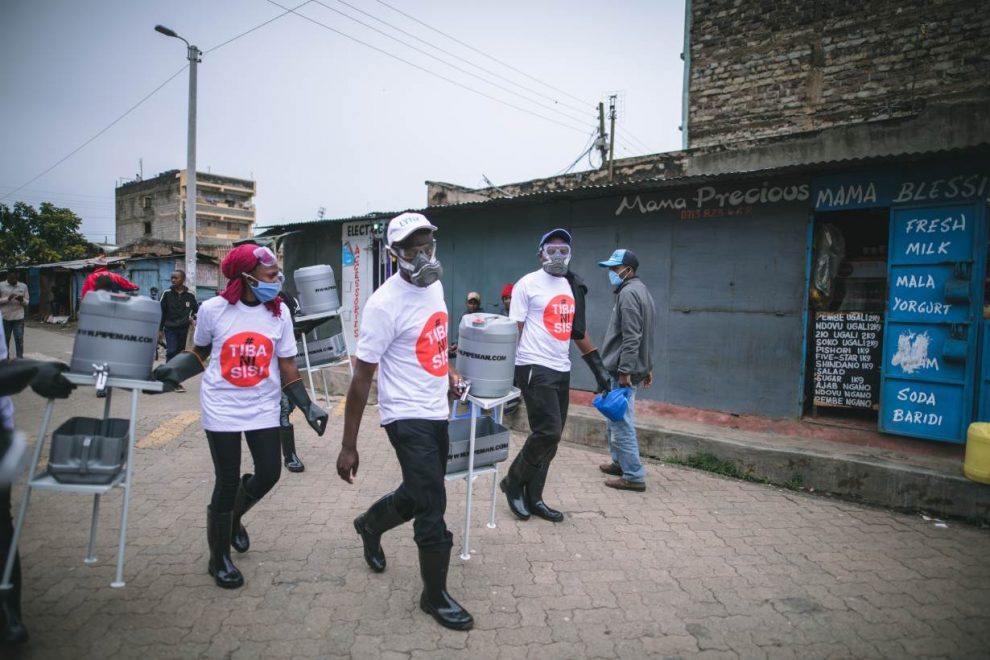 Half a million reusable masks, 123 tonnes of soap and 1,750 hand-washing stations. These numbers are music to the ears of business consultant James Irungu Mwangi – telling the story of the efforts he led to protect Kenyan slum-dwellers from COVID-19.

They also show how socially minded businesses can thrive in times of crisis, said Mwangi, who for years has urged African firms to look beyond profit and tackle issues like poverty and climate change by working with governments and non-profits.

The coronavirus pandemic has driven many firms to do just that, he said, describing the health crisis as an opportunity for companies to reassess their priorities.

“Businesses used to write a cheque to make a problem go away,” said Mwangi, executive director of the Dalberg Group and a partner with Dalberg Advisors.

“Now they realise if they don’t respond – help people fight the disease, preserve the planet – they won’t exist next quarter,” said Mwangi, a speaker at the Thomson Reuters Foundation’s annual event, Trust Conference, being held online on Wednesday.

When the outbreak hit Africa in March, many feared the disease would tear through the continent’s packed slums and overwhelm fragile health systems.

Mwangi marshalled Kenyan companies, NGOs, community groups and government bodies – players that rarely worked together but now had a common goal – in confronting the pandemic.

Out of the collaboration came Safe Hands Kenya, a campaign to supply vulnerable Kenyans, many living in Nairobi’s slums, with soap, masks and hand-washing stations manufactured locally to protect jobs.

“We launched in crisis mode,” he said. “Digital retailers, soap manufactures, media companies, and grassroots groups from informal settlements all piled in and asked ‘what can we do?'”

Mwangi convinced rival companies to share the locations of thousands of road-side stores in Nairobi where free hand-washing stations were installed.

The Safe Hands team mapped out kiosks across the city to identify neighbourhoods cut off from sanitation.

“It was a brutal death march of very late nights and some (of the companies) fought like cats and dogs. But it was this huge systemic shock of the pandemic that ultimately shifted mindsets,” he said.

Safe Hands Kenya has provided more than 1.5 million Kenyans with access to hand-washing facilities and reached a further 3 million through a social media campaign – Tiba Ni Sisi or “We Are The Cure”, which encouraged social distancing.

Fewer people have died of COVID-19 in Africa than initially feared, and the continent has registered roughly 35,000 deaths and 1.4 million confirmed cases, according to Reuters data.

Experts say some COVID-19 deaths are probably going unregistered, but that expertise in epidemic control from tackling other outbreaks as well as outdoor living and lower rates of travel could be helping Africa fare better.

Businesses are also playing their part in tackling the pandemic and its fallout.

Mobile apps that transmit agricultural prices and weather forecasts to farmers are being used to send out messages on how to avoid contagion by COVID-19.

In South Africa, the government is working with the private sector to manufacture 10,000 ventilators, while garment factories in Kenya and Ghana have switched to making masks and protective clothing.

“There is a funding drought coming in 2021 and its going to be Darwinian. Social businesses can’t just say ‘I’m saving one village’. They must have a way to scale-up, to set off a virtuous cycle,” he said.

But the days of maximising profit at any cost appear numbered, he said:

“The big, bad consequences of the future are no longer decades away. They’re not our children’s problems, they have become ours.”